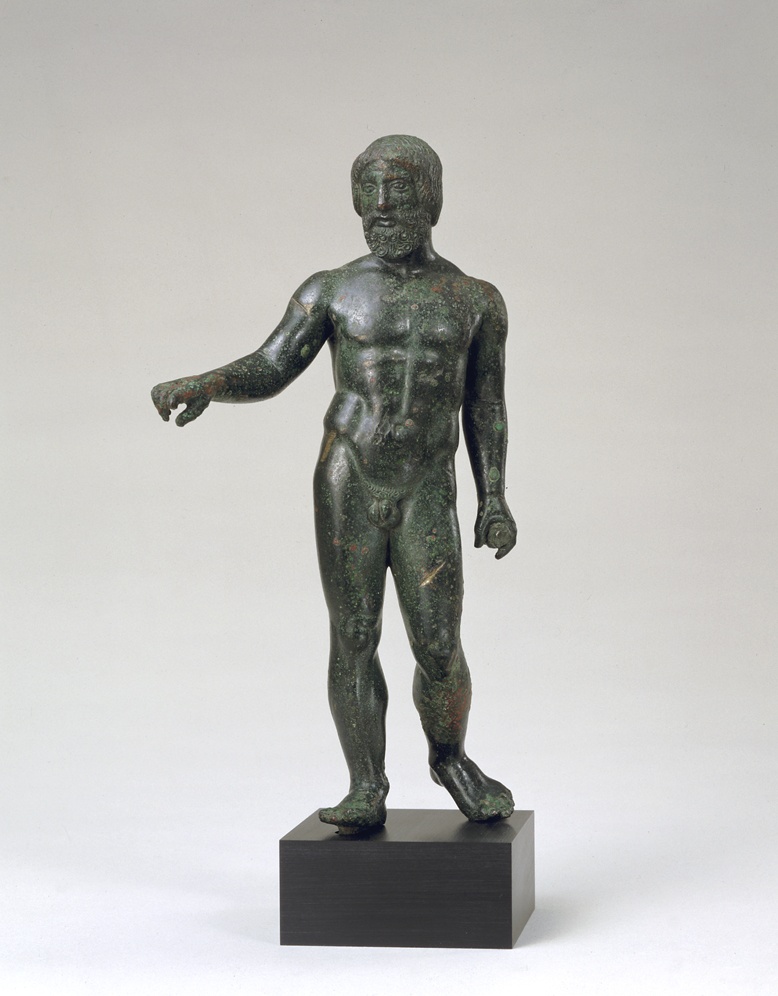 Solid-cast by the lost wax process, profusely cold-worked and engraved.

Condition: back of right hand flattish - to receive the eagle - with tip of index missing, serious gashes revealing the original bronze, mostly over the back of the figure. Also missing the bird and most of the thunderbolt held in left hand.

This must be a Zeus for his stance, his bearded face and the attributes he probably once held; though he no longer conforms to the Archaic type of the striding, castigating god brandishing the thunderbolt.

The attributes have changed sides: the eagle, now missing, would have been on the right hand and the thunderbolt in the left.

Cast separately, the bird was affixed through the hole in the back of the hand; the fingers are curled under in order to avoid damage, the normal position for holding a bird of prey - falcon or eagle. In his left hand are the remains of what must have been the thunderbolt.

He is probably the product of a North-East Peloponnesian school as he has affinities with: the slightly earlier Argive youth from Ligurio [1], and the Herakles from Mantinea (Arcadia) [2] generally ascribed to Argos.

We sense also a rapport with a bronze which in its time would probably have been an interesting comparison for our statuette. This we know only through a free marble copy in Olympia [3], which must reflect something of its original as a work of art.

Argive characteristics are the middle parting of the hair and the hair band [4]. For the beard, we have a comparison with the Mantinea Herakles. However his facial expression and the workmanship in the engraving of his beard and hair - but not their style - hint also that he could be the product of a Thessalian workshop under Attic influence whilst reproducing an Argive canon. For Attic work he is both too heavy and too static in feeling.

In a letter, P.C. Bol [5] says that this statuette of Severe Style is of particular importance because though it closely reminds us of the early production of Polykleitos, it expresses characteristics that are totally different from his figures. This reinforces the growing theory that traits considered as Polykleitan need not be of his invention. Rather, according to Bol, he would have assembled in a canonic system formal elements that were developed in various schools during the first half of the 5th century. In conclusion, this statuette incorporates many of the characteristics that contributed to a new balance, a new equilibrium. An existential evolution to be embodied in a new convention, a synthesis that we owe to Polykleitos.