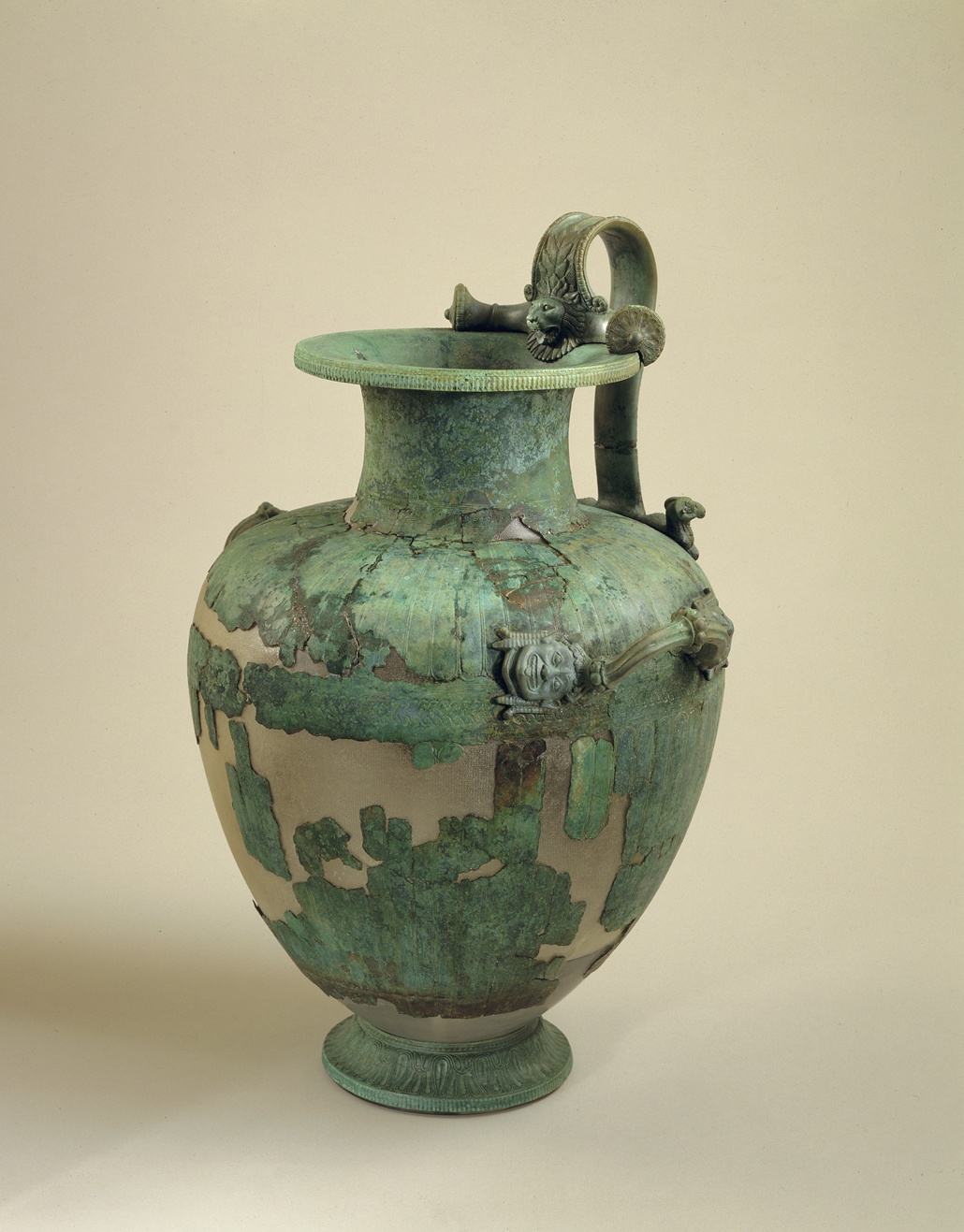 Composed of five elements variously worked but all finished with careful burnishing and polishing. The neck and mouth with its tongue pattern cast [1] to shape, its prolongation a squat body originally of same thickness as the rim, was hammered and annealed repeatedly, thinning the metal and stretching the vessel to its present form. The handles and the foot solid-cast. All the parts of the hydria save for the neck elaborately worked in the cold, hammered, cut and chiselled.

Foot and handles attached to the body by soft solder
(tin or lead).

Condition: patina of the handles a pale sandy green with blue areas. The vertical handle with three beaded ribbed strips broken in two across the back, its lower extremity, a Gorgo palmette, missing.

The body of the vessel in many pieces, about one fifth missing. The mouth and neck intact, broken off at the shoulder.

The body just above the foot was damaged in antiquity and replaced with a hammered section. This overlaps the original vessel by about 2 cm and was attached to it using soft solder. The whole restored [2] and mounted in recent times.

Hydriai served mostly to carry water though they were also employed for other uses. They were sometimes given as prizes for sporting events and formed part of temple treasuries. They also served as burial urns.

The body of this vessel is decorated with two registers of tongue pattern separated by a band of guilloche framed by concentric circles. The foot is ornamented with lotus flowers and stylized palmettes, its rim is ribbed.

Those examples with a lion's head on the vertical handle were produced from the late 6th until after the middle of the 5th century B.C. [3] Details of the vertical handles differ, some have gorgons at the base, others sirens, lion scalps or palmettes, and additional motifs are generally rams, sometimes pegasoi. We have too few specimens to enable the establishment of workshops to which one could ascribe individual vases with any degree of certitude. Also, the find-spots suggest that hydriai were made in different locations in Greece and Magna Graecia. Both H. Payne [4] and Cl. Rolley [5] have explained the problems involved, and the difficulties in the attribution of vessels that are very similar though found at different sites.

Among several handles comparable for the type are one in Athens [6] from Dodona and another in Naples [7], probably Campanian. This hydria is surely from the Peloponnese, and probably to be given to Corinth.

1 All cast parts done by the lost wax process.

2 Work carried out on and off over a three-year period by the Head Restorer of a major museum; unfortunately, though he found a brilliant solution to support the whole on a plastic form inside the foot, faced with difficult problems, he adapted some of the metal sheet to the plastic. Since the metal had in places distorted and joins were difficult, the edges of some of the pieces were ground. The author had strongly suggested that a body for the vessel be made of plexiglass, however this proved impossible to realize notwithstanding attempts in Switzerland and England; he further expressed the wish that the material used be transparent, or at least light in colour, and the sheets of bronze of the body fixed on to it with clips, resulting in a restoration of total purity. However, the missing parts were about to be made against the author's instructions of a greenish colour. In preparation for this and probably to enable a better adherence of the glue, many of the edges had been ground, making any new assessment as to the validity of the placing of some of the fragments almost impossible, and at best problematic. This is very serious, for in any restoration, there must be total respect for the work of art and not for the material(s) which serves for this restoration. In view of what precedes, the odd spot of glue having been left shining on the vessel, and the disagreeable aspect of the plastic where parts of the body were missing, the vessel, since its return from Russia, has been entrusted to Walter Haberkorn who has done his best to repair the irreparable.