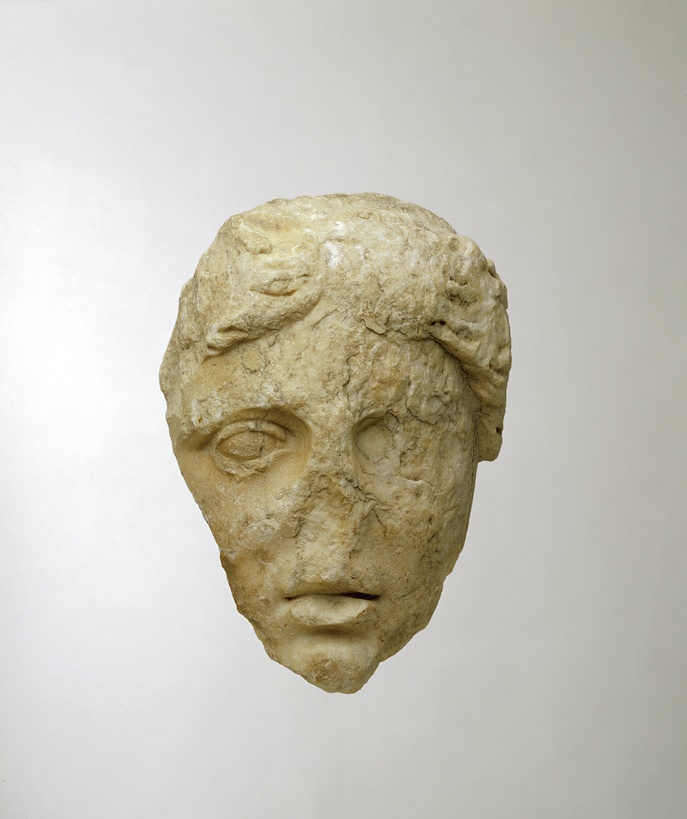 Carved from what would appear to be Pentelic marble.

Condition: terribly damaged, and with little of the original surface preserved: a small bit of the forehead on the right and most of the surface on the section of the right side of the face. Clearly recognizable here are the outline of the eye, the slightly curved groove that flows beneath the eyebrow from the inner corner of the eye and beyond its outer corner. The sensitively indented curve of the surface below the eye and another one on either side of the nose above the nostrils below the bulge of the cheek, the corners of the mouth and the lower contours around what is left of the lower lip, with a deep groove below the latter which separates it from the rounded protuberant chin.

This fragmentary head exudes the ethos of Attic sculpture of the period which, notwithstanding its damaged state, is revealed by comparison with other works. We feel, however daring, that it could belong to the west pediment of the Parthenon. It has been suggested though that the head appears to be post-Parthenon, perhaps of the decade 430-420 B.C. The excessive play of light and shade around the chin and mouth, the half-open lips and the general softness of the expression are not to be found in the pedimental sculptures of the Parthenon, still somewhat severe looking. In addition, the softer traits of this head are characteristic of post-Phidian works of the 420s; moreover, the triangle of the forehead is too regular, the eyes too narrow and too bulging by comparison with Parthenon examples. Finally, the scale seems too small to have belonged to any of the headless female figures on the west pediment of the Parthenon. A further suggestion is that it may be possible to associate this head stylistically with another Attic work of the 420s, the male head from the Temple of Apollo Zoster in Vouliagmeni , certainly later than the sculptures of the west pediment.

His eyes are wider, though also bulging and both heads are roughly of the same scale, besides which, their corrosion is similar.

E. Berger told us that the above remarks were in principle right, though he did not exclude it belonging to the Parthenon, and though the dating c. 420 was an ideal one, it did not mean it was the right one. "There were already progressive sculptures in the 430s. It is always possible that it be a very ripe sculpture from the west pediment. Of course, the size is determinant".

The head is very close indeed to the Apollo head from Vouliagmeni [1], and exudes for us a similar feel to some of the Parthenon sculptures. If indeed the present surface is comparable to that of the Apollo, possibly because carved from a marble from the same part of the quarry, maybe the hazard of time, its damage and the colour of the remaining original surface compares with much of surviving Parthenon sculpture.

The Vouliagmeni head which reveals Parthenon influence has been brought up in a paper by E.G. Raftopoulou [2] where she discusses a new fragment in Athens. In discussing the group she relates the fragment with the head in Athens from the Kerameikos, dating them towards 430 and stating that their dependence on Parthenon art may now be acknowledged. Such characteristics as the large oval of the face, thick eyelids little recessed, rich volume of the hair and large structure of the head fit our head admirably, and correspond to the dynamic forms of the heads that come from the Parthenon or are attributed to it [3]. She also discusses other Attic pieces deriving from this influence, such as the Apollo from Vouliagmeni where the eyes are unusually open, another feature that fits our head.

Some of these heads were obviously made by first-rate sculptors. A great master would be ahead of his time, thus sculpture that stylistically appears of slightly later date [4] may still be a part of the Parthenon. Various masters worked on the monument and the pediments were by different sculptors.

As to the west pediment of the Parthenon, J. Boardman [5] says that "The centerpiece was a great cross of the two gods, Athena and Poseidon, ... The rearing chariots behind them ... seated, reclining and kneeling figures of both sexes and all ages
attend rather than watch the outcome of the struggle. They must be the early kings and heroes of Attica and their families, an identification of individuals is not easy."

Might not this head be from the west pediment and possibly, however hypothetical, one of the daughters of Erechtheus? [6]

4 Taking the Parthenon as the standard or measure.

6 Legendary king of Athens who, after consulting the Delphic Oracle, sacrificed his youngest daughter to save the city from Eumolpos and the Thracians.