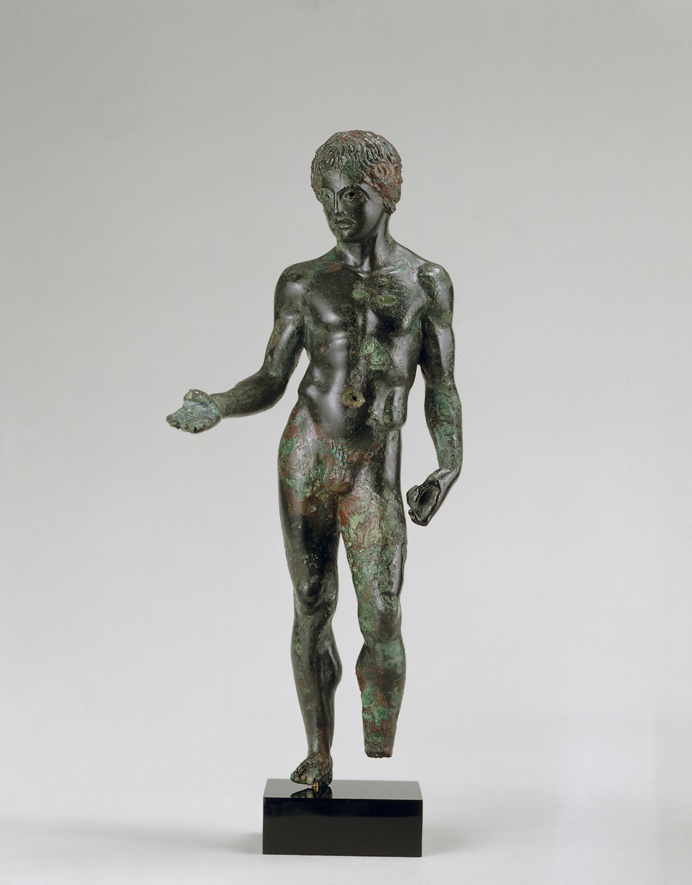 Solid-cast by the lost wax process and then cold-worked.

Condition: right thumb and tips of right fingers missing, also missing front of right foot and all of left foot from just above the ankle, damage to sex. Much of surface damaged by copper chlorides with some pitting. Ancient casting flaws carefully repaired at the time.

Patina: a smooth greenish-black, small parts almost greyish-green, the original golden brown of the bronze visible in places, much of the surface with varying shades of green, and red oxidization.

Possibly a young athlete making a libation, the extended right hand might once have held a phiale, his lowered left hand a laurel branch.

Both the date and the workshop pose problems. In its stance, certain characteristics and the mood expressed, this statuette shows a very strong Polykleitan influence though it is an original creation. The stance - the position of the legs, the tilt of the head, the line of the left arm with its bent wrist and the position of the hand - creates a certain elastic tension.

The mood is conveyed by this and by the sensuous mouth with the curving, well-marked lips. Other Polykleitan characteristics are: the particular way in which the space is filled beween and including the "trapezia", a line hypothetically drawn between the top of the shoulder-blades, and the base of the neck, like an incline; the wide and marked edge of the rib-cage; the hair, which, like that of the earlier Doryphoros and other Roman copies of Polykleitan works, seems placed on the head like a bonnet or wig and makes the head appear more voluminous.

The subject, a victorious young athlete, was a particularly popular theme of late Polykleitan works. They conveyed a lyrical mood and the pose displayed a generally harmonious equilibrium.

The alleged provenance, shared with a bronze statuette of a dead or sleeping youth [2] that is dated Early Classical and tentatively attributed to an Attic workshop may, if correct, help us. They share the same thin nose bridge, narrow nostrils, similar sensuous curved lips, fingernails and double parallel lines on the right wrist of the dead youth and the left wrist here. The sterno-mastoid muscles ending in a V-shape are similar as are "valleys" outlining other muscles on different parts of the body. Related too are the iliac crest, rib-cage and pectoral muscle as well as the "valley" formed by the deltoid. The profile lines of the Achilles tendon and the ankles are the same. Completely different, however, are the eyes and the different twists of the body.

Both youths have tight bottoms though somewhat different, the buttocks more sensuous on ours.

For technique, the arms of the dead youth are said to be cast separately, as shown by X-ray. We think that this is also true of our statuette, though it has not been tested. Very similar on both statuettes are "extensive and extremely careful repairs of flaws" carried out after casting.

Our statuette has a repair patch cast on the forehead above the nose, one on the right side of the chin and several very careful small round patch repairs located at the right elbow, above the pubic hair on the right side, in the middle of the back and on the upper exterior right thigh. In conclusion, though the piece compared has been tentatively ascribed to Attica and dated to the Early Classical or Severe Style, c. 480-460 B.C., we feel that the date is already well into the third quarter of the 5th century and that our statuette is to be dated somewhat thereafter, possibly still in the late 5th, but more likely already in the early 4th century.

We feel that our youth is definitely local work, perhaps Ionian, and not an import, and we are in favour of a similar attribution for the dead youth.

In this context differences in style may depend on a variety of factors: if, for instance, the work is a product of a local artist, the extent to which he has absorbed foreign influences or might be impressed by an Athenian sculptor working in the same workshop; if made by a migrant Athenian artist, the length of his stay in his new homeland or the degree to which he adapts new conventions or modes of expression.

It is worth recalling that Polykleitos, renowned throughout the Greek world, went to Ephesos around 435 B.C. and made a famous statue of an Amazon for the Artemision. During his stay he was almost certainly favoured with private commissions and the presence of such a personality must have influenced the local schools. Furthermore, shortly thereafter Athenian artists, probably already aware of some of the innovations of Polykleitos and following the upheavals of the Peloponnesian Wars, migrated to Ionian cities in quest of work.

1 Probably by an Athenian immigrant artist, but in any case under strong Attic influence.