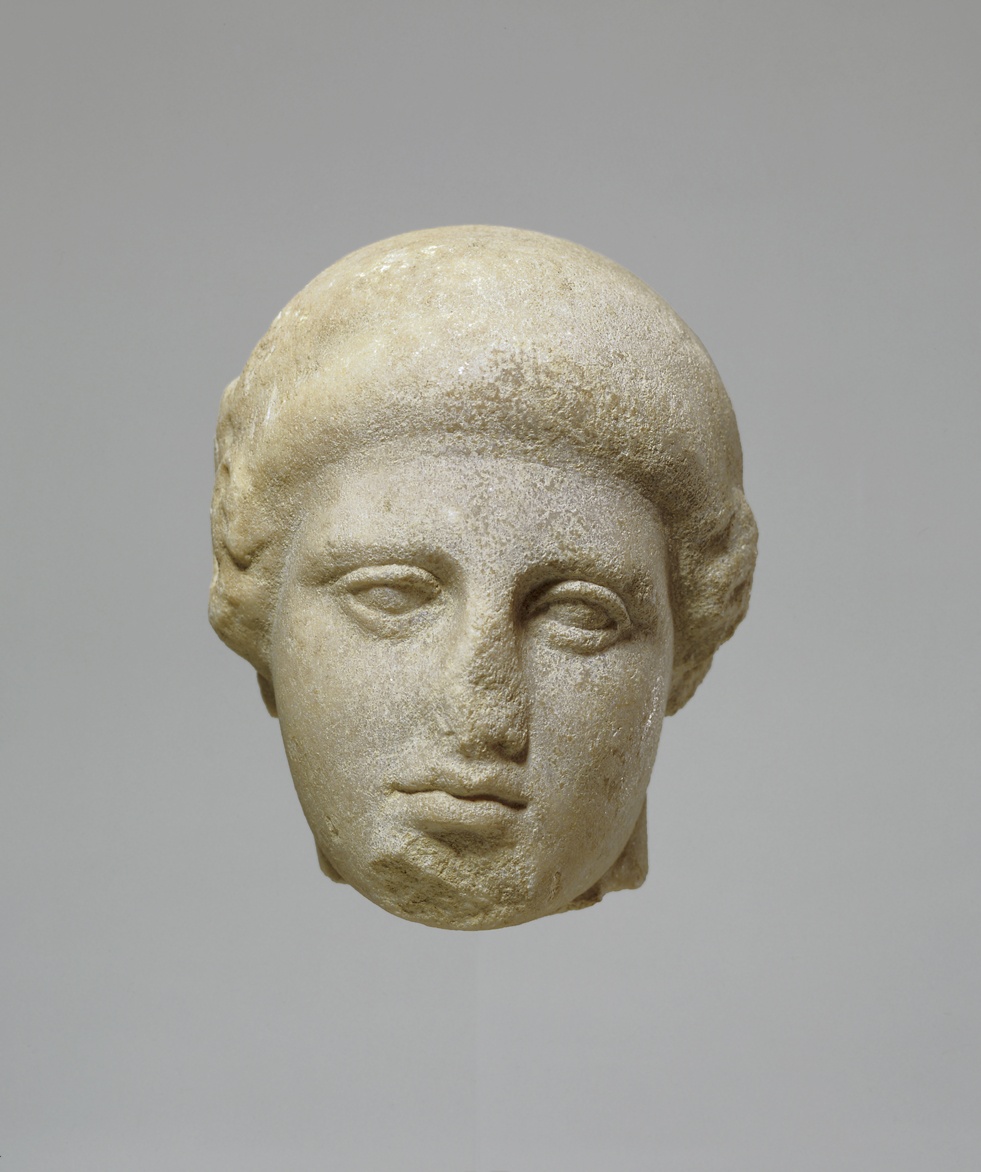 Condition: broken at the neck. Front of the chin below the lower lip razed off. Chip on left and right of neck at the break, the lower half of the nose mostly broken away. The odd little nick to the face and eyebrows, the eyelids lightly abraded. Left ear weathered, edge of right ear chipped. Above left temple and ear a lumpy volume either unfinished or too damaged for identification - over right temple and ear a large much damaged section, in it two round drilled holes (21 and 23 mm deep, diam. about 13 mm).

The top and back right side of head and section over nape of neck left unfinished. The surface on right top and back side of the head claw-chiselled. The section above nape of neck left unfinished, the back of the head sliced off roughly with four more round holes (21.5-25.5 mm deep, diam. c. 13 mm). Ear-lobes pierced to enable attachment of ear-rings.

Surface of varied hues: greyish dirty bluish white, the right side of head with a yellowish tinge. Most of the face and part above the forehead (whether hair or fillet) incrusted with limestone deposit of mottled texture.

This head is an enigma. It was probably from the pediment of a naiskos. Though less likely, it could represent the servant girl on a funerary monument in very high relief. Some parts of the figures must have been in the round. She wears a sakkos, sometimes worn by maidservants on grave reliefs, creating a slight depression in her hair.

We cannot explain the six drilled round holes on the head, four at the back and two above and slightly forward of the right ear. Whether made for attaching, repair, or for reuse in a different context, we do not know.

The general feel, her eyes, the bridge of her nose, her mouth, are not only very Atticizing but bear close resemblance with the features of certain heads on the Parthenon frieze. We think that she was surely made by an Athenian artist who had emigrated to Asia Minor after the Peloponnesian Wars in search of work. The head is more Attic in its execution than the grave stele of Euagoras (cat. no. 148).