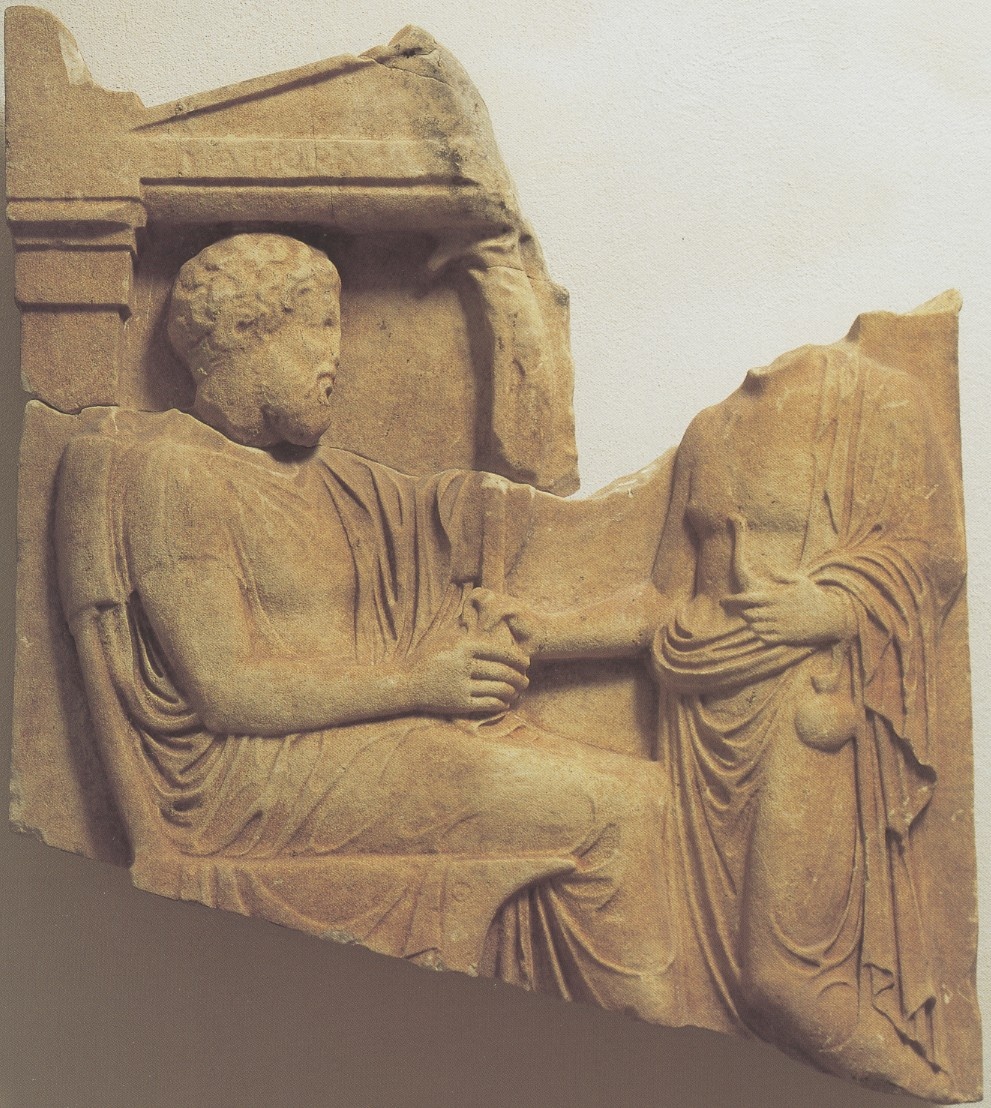 Condition: much weathered, a reddish orange, off-white colour with greyish and blackish stains.

The composition is typical of Attic and other Greek stelai depicting the deceased. Represented here is a bearded man wearing a cloak and an undergarment, a short-sleeved chiton, seated on a klismos, a chair with a back rest. His name is Euagoras [1] as incised on the horizontal plinth on the preserved part of the cornice and he majestically holds a staff in his upraised left hand. Standing facing him his son, holding a strigil in his left hand with an aryballos dangling by a strap from his wrist, who though draped like an adult in a mantle, has the proportions of a youth barely out of his teens.

Central to the composition and touching in its humanism is a small bird which both their right hands gently enclose. The deceased with a serene protective gaze towards his son appears [2] to pass him the bird which the latter seizes between his thumb and fingers. The scene expresses the deep love common to all for life, however fleeting, which the old man lovingly and caringly passes on and entrusts to his son. Depictions of family members accompanying the deceased, as he was in life, are common on Attic stelai of this period. Such representations symbolize the continuing communion between the living and the dead.

There are no direct comparisons though this funerary high relief fits into a tradition and sculptural development. Its stylistic traits are in keeping with numerous sporadic finds from the coastal region of Asia Minor and its offshore islands. The usual relation, the connection between the figures by a handshake, is here replaced by their meeting in a reciprocal gesture around the bird. A different expression from the usual typology, for though the bird is a favoured attribute of grave reliefs, it fulfils a less emotional role than it does on several Eastern Ionian reliefs. On stelai where several figures are depicted it is customary for the older person to pass on a bird to the younger. Occasionally in such cases the bird would appear to have an allegorical meaning, as here, with the symbolical passing on of precious life.

Where was this stele carved? Was it sculpted in East Greece by an Athenian artist seeking work there after the Peloponnesian Wars, was it sculpted by an Ionian artist influenced by the Parthenon on which he may have worked? It is difficult to be certain but though E. Berger agrees that it reveals a strong Atticizing influence, certain characteristics would indicate to him that it is of local East Greek workmanship, possibly executed by an artist in the region of Bodrum-Marmaris.

The figure of the deceased with his very dignified bearing wears a short-sleeved linen chiton as an undergarment which was no longer depicted in Continental Greek [3] sculpture as it had ceased to be the fashion after the Persian Wars. However, in Asia Minor the Ionian chiton continued in use not only for women but also for men. Mausolos wears it in the 4th century.

Though somewhat reminiscent of the lofty solemnity of Parthenon figures, there is an evident conscious attempt to imitate their simple naturalness. A certain lightness is missing. The line of the pleats of the garments appears thicker, the bodies are more massive with a softness and heaviness of flesh, and the articulations of the elbows, wrists and hands are not detailed.

E. Berger tells us that from an Eastern Ionian region there is an interesting antecedent for the subject of our relief in the Vatican, earlier in date, around 440 B.C. A naked youth holds his right hand lowered and clenched, and between his thumb and index one may recognize the severely damaged and hitherto unremarked remains of what would seem to be the small head of a bird peeping out, as he greets his servant boy who holds in his hands an ointment vessel and a strigil. It was possibly executed by an Eastern Ionian who had emigrated to South Italy. Another example [4] of a later date placed in the first quarter of the 4th century by Elisabeth J. Milliker is, Berger suggests, from the same workshop as our stele. We think it is surely from the same ambience though considerably more linear, rather static, expressing little of the humanism that we perceive in the present example.

Very few stelai in Attic style have been found in East Greece. Pfuhl and Möbius [5] believed the few known examples to be imitations of Attic works, E. Berger considers this stele to be of East Greek manufacture whereas Chr. Clairmont not only considers it to be Attic [6], but calls the marble Pentelic and says that the alleged provenance is highly unlikely. We consider that the present stele was probably made by an Athenian emigrant but in any case by an artist who had surely had some training in Attica for it is the most Atticizing of the surviving examples from Ionia.

We are deeply indebted to Ernst Berger, for when we telephoned him on 14 October 1993 to ask him about a detail of the present stele, he told us that he had spoken about it in a conference in Berlin in 1972, never published, and kindly sent us his notes. These have formed the main basis of this entry, but we are responsible for the presentation and any and all mistakes.

2 Appears, for the bird is looking at the bearded figure as though looking back at the one whom life has left; for it might be thought by the position of the youth's hand around the bird's neck and upper part of its body, that it was he who was passing the bird to his father.

3 It was still worn, however, by some professional classes: craftsmen, warriors, priests, musicians and charioteers; however none of their attributes are here visible.