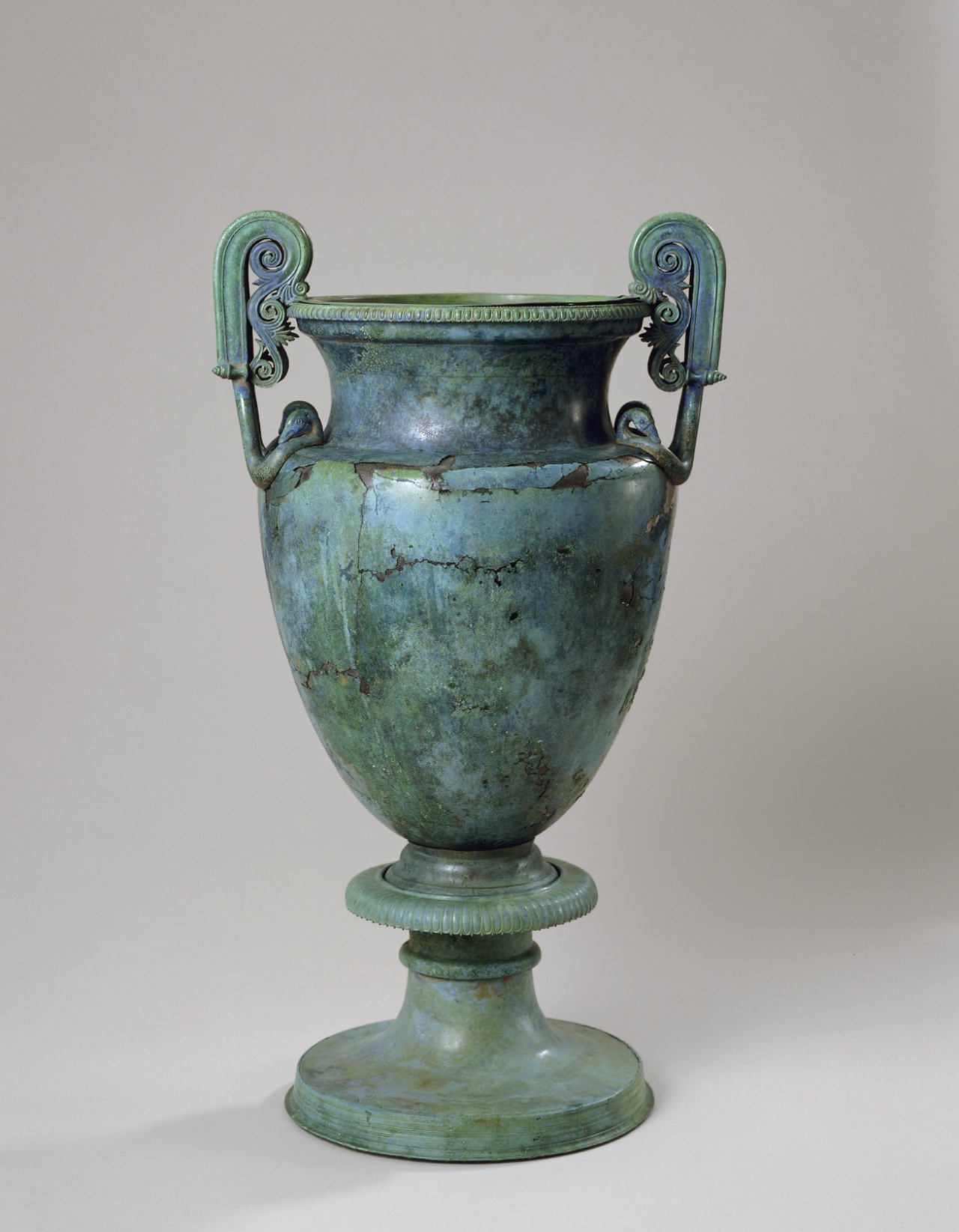 Composed of six elements variously worked but all finished with careful burnishing and polishing. The neck and mouth with its ovolo and beaded border cast [1] to shape, its prolongation a squat body, of same thickness as the rim, was hammered and annealed repeatedly, thinning the metal and stretching the vessel to its present form. The handles and the foot solid-cast, the former and the crater's mouth to which they were attached elaborately worked in the cold, hammered, cut and chiselled.

The stand (hypokreterion) made in two parts: the upper flaring section into which the foot of the crater insets cast as it now appears, and the lower part cast to the general shape, then hammered and annealed to fit. Such details as the tongue pattern of the upper flaring section with the parallel lines of the stand's rim were carefully tooled in the cold. The lower moulding on the upper section served as reinforcement and, to hide the join, it rested on the lower section into which its continuation, a short tubular segment, was inserted.

The sieve, also composed of two parts, fitted an indent on the mouth of the crater. It was made by hammering and annealing two previously cast round sheets. The strainer part was hammered to a shield boss shape, fusion-welded to the plate-like section whose centre was cut out with the edge hammered down and folded over to fit. All traces of the join on the outside were carefully tooled away. The strainer punched with holes forming an elaborate design: two pairs of concentric lines separated by quarter-moon sections outlined by holes; the innermost part quarter-moon sections running in an opposite direction with, in the centre, a six-armed star shape.

The handles and the foot attached to the crater by soft solder (tin or lead) and the two parts of the stand, though a very tight fit, reinforced with the same.

Condition: the patina of the whole a bluish green with paler sandy green and yellowish overtones here and there.

The body with parts missing and pieces broken off has been restored without any additions. Missing are two small handles formerly soldered on the upper edge of the sieve at the emplacement of the cut-outs to accommodate the crater's handles. Also missing the palmette [2] with a central leaf that was soldered on the outside of the handles between the volutes, on and just above the arch that ends in two swans' [3] heads. The lower part of the foot-stand is a modern replacement down to the foot-ring [4].

Volute craters are difficult to date and defy attribution to a given school. The foremost specialist, Claude Rolley [5], aptly sums up the problem as follows: he believes that the preponderance of production is unquestionably [6] West Greek, that artisans probably travelled from Magna Graecia to Macedonia, that the direction of trade from the end of the archaic period onwards was beween the west and North Greece, to be more precise, between Campania and non-Greek Apulia with Epirus and Macedonia. Rolley judiciously points out the difficulty in dating and considers that one should give up trying to guess whether the Vaste, Agrigento and Derveni volute craters were brought from the west or the east. For the Vaste example he finds neither there nor in the indigenous tombs of Messapia any antecedents and considers that the usual comparisons are on a route Sala Consilina-non Greek Apulia and Northern Greece. Historical facts would confirm this assessment. He reckons that, by comparison with the famous Apulian red-figured volute crater from Ruvo representing Orestes in the temple of Delphi [7], the production was centred in Apulia, as with both the Boston and the Herculaneum 4th century B.C. classical bronze examples which are possibly, he says, Tarentine.

With respect to dating [8] one should be extremely prudent for Rolley has the impression that there were bronze vase workshops that were very conservative for a long time. This can be seen for instance with the volute crater from Agrigento buried at the end of the 5th century B.C. which is identical to the one from Derveni, made, so he says, in Macedonia in the second half of the 4th century, in keeping with the homegeneity of the Derveni vessels.

The earliest example in bronze belongs to the late 5th century B.C. and was found in a tomb in Agrigento [9] dated by the pottery; the closest parallel, though it lacks the flow and delicacy of our example, is the larger crater in Boston [10] from Vaste with a certain South Italian heaviness. It differs for minor details with its fluting on the outside of the vessel's mouth and on the foot-ring, a slight difference with the lower volutes of the handles, with its circular ridge round the foot of the stand and its less curved neck and slightly more rounded body.

Unfortunately there is no definite indication for the date or find context of the Boston example, and though two oinochoai [11] from the same collection were said to have been found with it, nothing indicates that they come from the same tomb [12]. It is to be noted, however, that one of these oinochoai with the lower end of the handle ending in a siren has been ascribed by Neugebauer to South Italy, possibly Tarentum, and identified as Corinthian by Payne [13].

Other comparisons are the vessel from Agrigento to be dated in the second half of the 5th century B.C., slightly less ornate in details, with a similar foot but undecorated rim for the outside of the mouth; the Louvre example [14] dated 5th century B.C., of unknown provenance, with similar handles but the body considerably restored; and the Derveni crater with a beaded rim like this example, but with a fluted foot, dated by the tomb's context to the last quarter of the 4th century B.C. though we believe that it could be somewhat earlier.

Without wishing to contradict Rolley, and agreeing with most of his assessments, we would like to point out the following: there is in the National Museum in Naples [15] an Attic red-figured volute crater dated 475-450 B.C. by the Niobid Painter representing Greeks fighting Amazons, that was found in Ruvo, Apulia. Could this not be the prototype for the Orestes terracotta volute crater that is dated in the first half of the 4th century B.C.

Attic red-figure volute craters obviously had bronze prototypes, for among other things the handles are fragile and their mode of attachment to the shoulder propitious for bronze, thus though the author does not know of any surviving early example, the prototype is surely continental Greek, possibly Attic.

However, by the 5th century B.C. Corinth overshadowed by Athens would have been likely to imitate the latter's production as Geometric potters had been wont to do in earlier times. In view of Corinth's prestigious craftsmanship in metal vessels in the 4th century B.C., surely they produced to order for the newly emerging powerful Macedonian court and some of their artisans must have worked on the spot. We believe that it is more than likely that the Derveni volute crater and other vessels from Derveni could have been produced by Corinthian craftsmen. The refinement of the present example, certain unique details - such as the way the palmettes were made separately and soldered on, as were the little handles now missing from the sieve - and the colour of the patina which would tend to confirm the alleged provenance, could indicate Corinthian manufacture.

1 All cast parts done by the lost wax process.

2 As indicated by traces of soldering, the incised outline of the central leaf and a groove on either side of the end of the moulding on the lower inside of the volutes.

4 Since the original which is preserved had cracked free of it, had a fissure or two, and was distorted, it would have been impossible to hammer back to shape and repair without ruining the metal surface and patina.

5 We are indebted to Claude Rolley for sending us the text of his talk at Nijmegen: "Datations impossibles: à propos de quelques cratères de bronze" (International Bronze

6 And mentions a fragment with a swan's bill slightly different but found on the territory of Sybaris and points out that it is to be dated before 510 B.C.

8 It would seem that the production of volute craters in classical times spanned a whole century, covering the last quarter of the 5th through the third quarter of the 4th., and that these were produced in considerable quantity in Magna Graecia.
J. Vokotopoulou (The Kalyx Krater of Sevaste in Pieria, in: Worthington, I. (ed.): Ventures into Greek History <Oxford, 1994>) mentions 4 volute craters (pp. 199-200), suggesting that the Boston and Naples examples are the precursors for the Sevaste hypokreterion and adding that they must date to the end of the 5th century B.C.