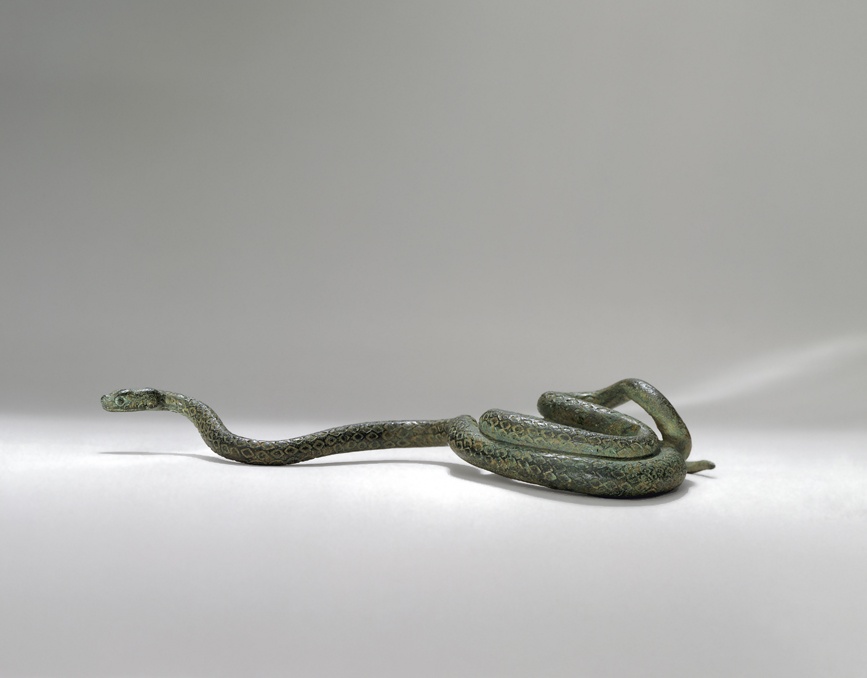 Solid-cast by the lost wax process; the visible parts carefully worked in the cold, especially the scales and head. On the inside of the coil there are special markings, notches, for attaching.

This snake [1] was surely a votive offering and was probably part [2] of a group as indicated by the markings. Snakes are extremely common in Greek myth and cult for which their mysterious nature made them appropriate. They often signify a connection between man's world and the divine, especially the chthonic deities of the underworld. From the 7th century onwards snakes are frequently dedicated, but so were other animals. For example, a gold snake was found among the 7th/6th century B.C. votives in the temple of Artemis at Ephesos [3] and a bronze snake was among the many votive animals found in a sanctuary near Cesme in Ionia [4], probably of late 6th century B.C. date. Another coiled snake inscribed with a votive dedication to the Peloponnesian cult deity Zeus Melichios is in Berlin [5]. Two snakes dedicated to Artemis at her sanctuary at Lousoi [6], Arcadia, have been found, one in the form of a key. Many other bronze snakes continued to be made into the Roman period [7] .

Stylistically, this snake belongs to the 5th century B.C. and has a distant rapport with the serpent (perhaps meant to be the Hydra) fought by Herakles in a small bronze group in Paris [8]. However, the closest parallel is a snake in Boston [9], his head raised on upright neck and fairly stretched out as he wriggles forward. His scales appear similar, he is also said to be from Athens, and he is dated c. 400 B.C. Our example is probably of local, Attic manufacture.

2 G.M.A. Richter (Animals in Greek Sculpture <New York, 1930>, p. 36) says that they "occur frequently in art, but generally as an adjunct rather than a single representation".