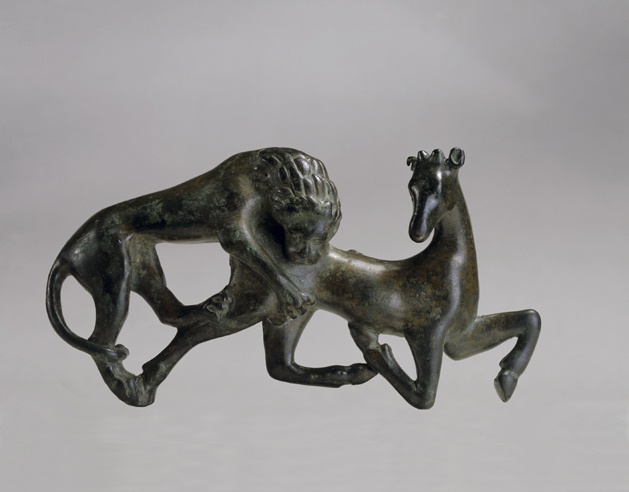 Solid-cast by the lost wax process - the modelling blocked-out but fluid - restrained working in the cold and highly burnished.

Condition: patina a thin blackish to greyish green, a light medal colour bronze showing through, traces of whitish earth deposits. The surface much worn in places, the left side of fawn's head: the details of the eye barely visible, the left nostril not at all; tips of horns worn down as well as both ears, the left with a nick. The left hind lower leg slightly bent upwards.

The motif of one or two lions attacking a prey (stag or bull) was already popular in the Archaic period and probably started in Athens [1]. It appears on monumental sculpture on archaic temple pediments: the east limestone pediment of the old Parthenon with on its right side a lioness bringing down a bull [2], on its left side surely its pendant, dated in the first half of the 6th century B.C., a group in limestone from the late archaic temple of Apollo in Delphi destroyed in 548 B.C. [3], the marble pediment of the Pisistratids in Athens around the middle of the 6th century, and a limestone group from the Agora in Athens dated 500-490 B.C. [4] It was popular in vase-painting in the late Archaic period [5]. It appeared on archaic Greek gems [6].

In bronze, an applique of unusual size (22.5 cm long) and dated 475-400 B.C., from the temple of Athena at Vouni [7] on Cyprus shows a bull attacked by two lions, and we have a whole group of bronze basin handles: two lions attacking a deer(?) from the Acropolis, a similar subject in Copenhagen of unknown provenance of late archaic date, and the one in Olympia [8]. There is the caryatid mirror from Kherson in Crimea [9] with on its cradle two lions devouring a bull, dated around 500 B.C., either Northern Greek or Scythian, says L.O. Keene Congdon, Scythian say the Hermitage and most others, and workshop of Kherson says U. Jantzen, but ascribed to Attica by W. Gauer [10]. It is surely not Attic.

A monumental marble group of lions attacking a deer from Sinope [11] has been ascribed by L. Budde to the first half of the 4th century. Though the comparison between monumental sculpture in stone and small bronzes is full of pitfalls and though the Sinope group is more naturalistic and later in date, we find a resemblance. Shortly after this applique entered the collection, E. Langlotz told us that he thought that it could be Thracian or Macedonian, late 5th/early 4th century B.C.

Our fawn represents a young buck possibly in November or December to judge by his antlers. A decorative element probably attached to the rim of some sort of vessel. However the considerable wear, which has somewhat erased certain details, has in no way impaired the fluidity of the composition and the poetry of the mood.

Somewhat at a loss as to how to attribute the group, we are inclined out of respect for E. Langlotz' knowledge and experience to favour a North Greek attribution. Nevertheless the lion and fawn are very close to the animal spirit of the Black Sea region as influenced by Scythian taste. They are exhibited here in the same case as the silver rhytons, cat. nos. 152 and 154, with which they are in perfect harmony.