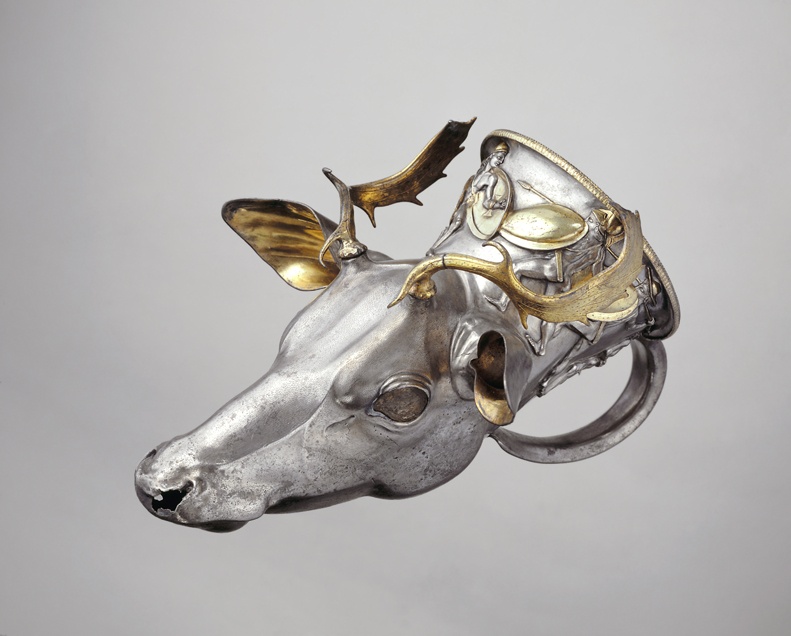 The body of the vessel roughly formed [1] from a silver sheet cut into a disc, hammered into dish shape [2]. From time to time, during the whole fabrication process, the dish had to be annealed (heated to cherry red) to resoften the silver hardened and rendered brittle by repeated hammering. The dish was held against an anvil and working around it hammered from the bottom upwards to raise the sides; gradually a beaker form would have been born. This was then hammered over various shaped stakes to produce the general form of the rhyton, the surface then planished to smooth out the ridges and heavy hammer marks. The final shaping was carried out by the repoussé method which is forming the design by beating out the shape and details from the inside and outside as required, using a variety of punches. Bitumen/pitch or a mixture of powdered sulphur rock and fine sand would have been used to support the vessel during this process. After the repoussé work details such as the downy skin over the forehead and muzzle and the little hairs around the snout and below the mouth were chased in. The inner corners of the eyes are accentuated with niello [3], as were once the nostrils and the mouth (as indicated by remains).

Ears hammered and shaped from a sheet of silver cut to size, each with a flaring base, held in place by three rivets [4] hammered down near its burnished edge. The antlers cast and inserted by means of a projecting plug that is affixed into a pipe-like section on the inside, held in place by solder. The handle forged into shape and soldered onto the vessel. All the gilding done by burnishing on gold leaf [5].

Condition: central hole in lower lip for short spout filled in and two holes for spouts made in antiquity on either side - spouts now missing. Nostrils torn with metal missing. Eyes, probably once of enamel or glass paste - inlays appropriate to the depth of the orbits. The helmets, spears, shields, scabbards and their straps, swords of figures, and the latters' pubic hair, gilt, as are the antlers, insides of ears, both palmettes of the handle and the rim of the vessel. Slightly worn here and there. Tips of ears slightly distorted, restored to shape, left antler broken and reaffixed. Handle slightly twisted, straightened out before affixing.

This rhyton, the largest so far known of several examples, is particularly interesting for the frieze of six naked warriors fighting around its wide neck. Five of them are beardless and all have their heads covered with different types of helmets and carry shields and scabbards. Over the deer's forehead two pairs of sturdy youths advance towards each other. Behind its right antler, the front figure, wearing a pilos, with anguished expression and lips grimacing in fear, faces a figure, wearing a Corinthian helmet, about to jab his adversary with a spear held high in his right hand. His companion, wearing a petasos, backs him up with shield and spear in similar position. On the other side, the supporting figure aggressively rushes forward, sword at the ready in his lowered right hand, wearing an Attic helmet, decorated with a spiral motif which continues the outer curved line of the top of the helmet and with cheek-guards raised.

At the back next to the handle, there is another duel. A youthful figure flees and looks behind in anguish as he draws his sword, while an older bearded man is vigorously thrusting with a spear, its point seemingly already buried in the youth's shield. Both figures wear a pilos. None have any body armour, except helmets. If they are meant for Greeks, or even Thracians, nothing in their dress or features betrays it. An interesting detail of the frieze is the foreshortening and the positioning of the sometimes overlapping lower legs and feet.

Are these scenes purely decorative ?

This is not the place for detailed comparisons with all other known examples, whether from Bulgaria, Thrace, South Russia, the Hellespont, Asia Minor and even Egypt. However, it should be noted that if the other examples show an Achaemenid influence, our rhyton is, M. Pfrommer says, the only exception. Thus we call it provincial Greek work, and unlike many of the others known, it is probably not from a Persian satrapy. It may be that this rhyton is still to be dated towards the end of the 5th century and it can be observed that the head of the stag itself is less sensitive than the deer's head, cat. no. 154, where the decoration bears closer resemblance to vessels found in South Russia. Thus, though the two rhytons and the Janus-headed amphora, cat. no. 153, are from the same ambience, all three are by different hands and in all likelihood from different workshops.

1 The firm of Plowden & Smith Ltd. has performed the conservation work on this rhyton and the two catalogue entries 153 and 154. We are deeply indebted to Peter Smith and Peter Willett for discussing technical details and enlightening
us with respect to the technology employed in the making of such vessels.

2 In the initial stages, a hollowed-out tree trunk may be used, laying the silver sheet over the cavity and working it down.

3 Niello is a metal sulphide and usually inlaid in prepared cloisons or incisions.

5 See footnote 1, both Peter Smith and Peter Willett had assured us, notwithstanding our strong objection that the gilding was peeling in places, that all three vessels, cat. nos. 152, 153 and 154, were mercury gilt. Upon re-examining the group with A. Giumlia-Mair (26-27 November 1994) we came to the conclusion that none of the three vessels were mercury gilt.