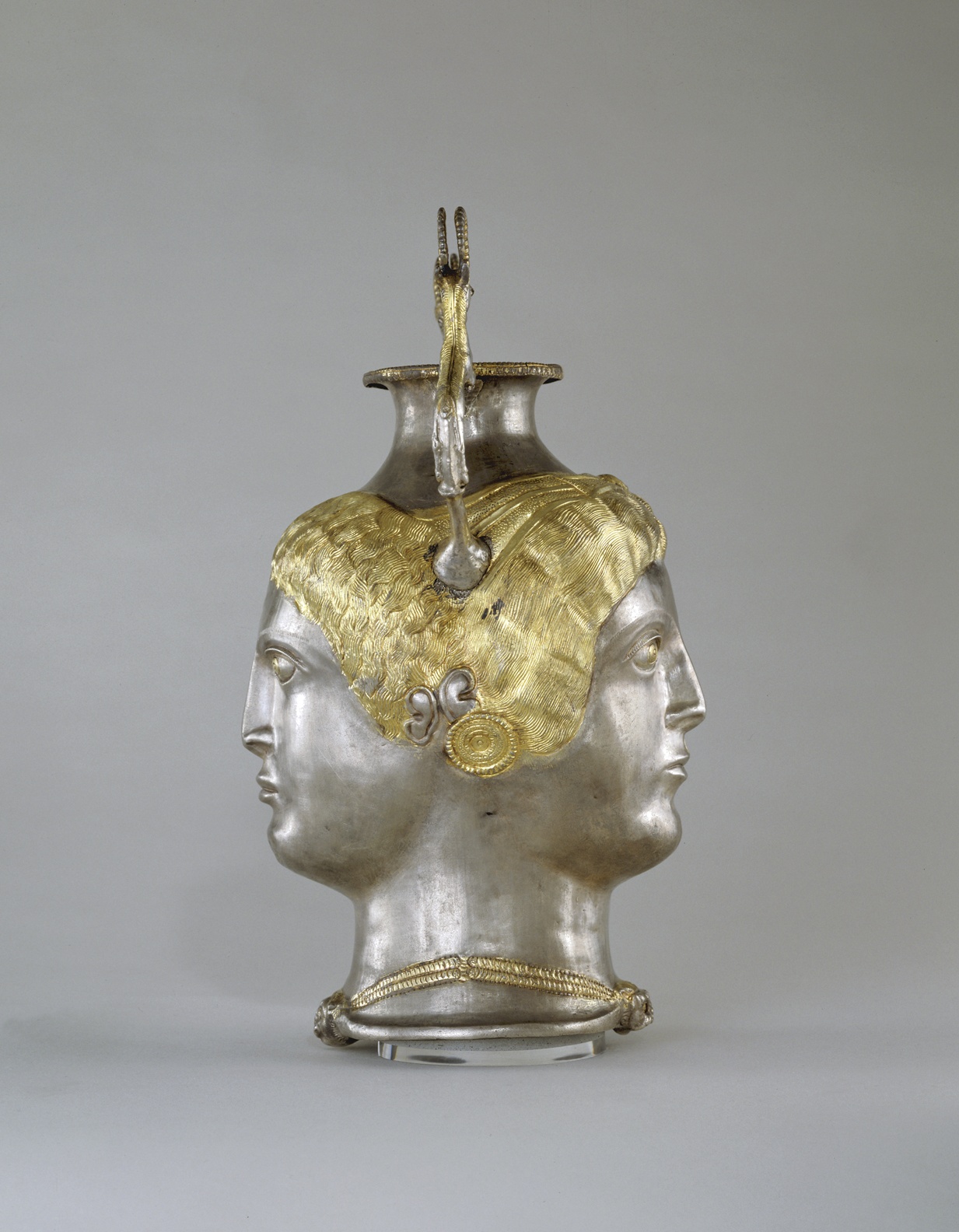 The body of the vessel roughly shaped by repeatedly hammering and annealing as it is raised [1] from a dish of silver sheet, in a technique that is called raising or back raising possibly on a wooden stake in a step-by-step operation followed by planishing to smooth out the ridges.

In view of its varying diameter the shapes were knocked out by the artist as he went along, proceeding by sections in repoussé from the inside out and working in both directions. This work divided in three stages: the elaboration of the base with its two feline-mask spouts, the working of the flat sheet up to the top of the foreheads, and the raising and hammering in of the sheet, shaping it in and then out to flare at the mouth, hammering a thickened rim before cutting off any excess metal and finishing with a guilloche tongue pattern on the edge.

To work from the outside the body is filled with either bitumen/pitch or with a mixture of powdered sulphur rock and fine sand, heated to render fluid. Once hardened, shaping can proceed [2].

In this vessel all the details were chased with bronze punches and chisels. The lips and noses were repoussé from the inside as were the upper eyelids. The hair was outlined using fine chasing tools.

The ibex [3] handles solid-cast in silver and elaborately worked in the cold before fixing onto the vessel by soldering; they were then partially gilt as were different parts of the vessel's body. All the gilding done by burnishing on gold leaf.

Condition: a rip and break on the edge of the mouth restored; the handles reattached, one of them missing the leaf attached to lower front knees that would have helped to fix it to the neck of the vessel under the rim. A crack with a little metal missing on the upper neck of the vessel below this handle and further down the metal worn through.

A hole (or gash) beneath the lower lip of the male head, his chin slightly indented.

A blow to the thick edge of the base.

The gilding worn slightly here and there.

This double-headed [4] vase is unique for its shape, with a male and a female head back to back, and with ibex handles. It is, with the rhytons, cat. nos. 152 and 154, and the one from Tarentum [5], among the earliest of such vessels. Examples in precious metal are known from recent discoveries in the north: Panagyurishte, Rozovets and Borovo in Bulgaria, and from old and more recent finds in South Russia. Less stylized and somewhat decadent is a later gold hoard from Panagyurishte [6] with a generally accepted date at the end of the 4th, beginning of the 3rd century B.C.; similar for the use of a head - single ones here - which have a lion protome-spout at the base. There is a resemblance for the turban around the hair tied in a bow with a metal hair ornament over the forehead below it. Little gold heads were used as pendants, ear-rings and surmounting spiral ornaments, see cat. no. 161, as of the 4th century.

Particular details of our vase are the ear-studs worn by the female head, the necklaces around both necks with the lion spouts as pendants, and especially the Achaemenid-type handles in the form of ibexes.

The workmanship of the hair, of the necklaces, of the egg-and-dart and beaded rim, though different, seems to have some affinity with Thracian output, whether it be the bull-rhyton [7] from the Borovo treasure, first half of the 4th century, the greave [8] from the Vratsa treasure dated 380-350 B.C., or the silver gilt plaques [9] from the Letnitsa treasure dated 400-350 B.C. On the greave, though the hairstyle is different, formed of little curls, both these, the fringe and the locks are executed technically as on our vessel; the fine strokes for the eyebrows and eyelashes on our heads find a parallel in the strokes on the inside of the outline of the eyelids. The execution of the figures on all the above parallels is somewhat coarse and awkward.

This must be the creation of a superior craftsman working under Greek influence save for the handles of which the model and the subject are Achaemenid, though probably executed by the same artisan.

Greek goldsmiths from Classical times onwards worked for Thracian kings and Scythian princes, the Persian satraps and the wealthy Greeks of the Ionian coast.

It is an early vessel such as this one, with rhytons, cat. nos. 152 and 154, that must be at the inception of production that led to the Panagyurishte treasure. The workmanship of this rhyton is probably Thracian and the expression of the heads resembles those on the above-mentioned four plaques that are later in date and local Thracian. Though the female head is more attractive than the male, they both have the rather boorish unrefined features of the faces on Thracian works.

J. Dörig [10] assigns a date around 370 B.C. and suggests that the female head may represent the Thracian goddess Kotys paired with Attis, who has the traits of a youth. We would like to think that this vessel could have been a marriage present for a princely occasion which would have permitted, instead of the modern kiss, that bride and groom drink from it simultaneously.

1 In the initial stages a hollowed-out tree trunk may be used, laying the silver sheet over it and working it down.

2 After having fulfilled its purpose, the core can be made fluid again by heating and removed.

3 Possibly of the caucasica species.

4 Vessels in the form of a head, see cat. no. 92, and double-headed were made in terracotta from the Archaic period onwards. However, it is only during the Hellenistic period that one finds them made in metal (bronze).