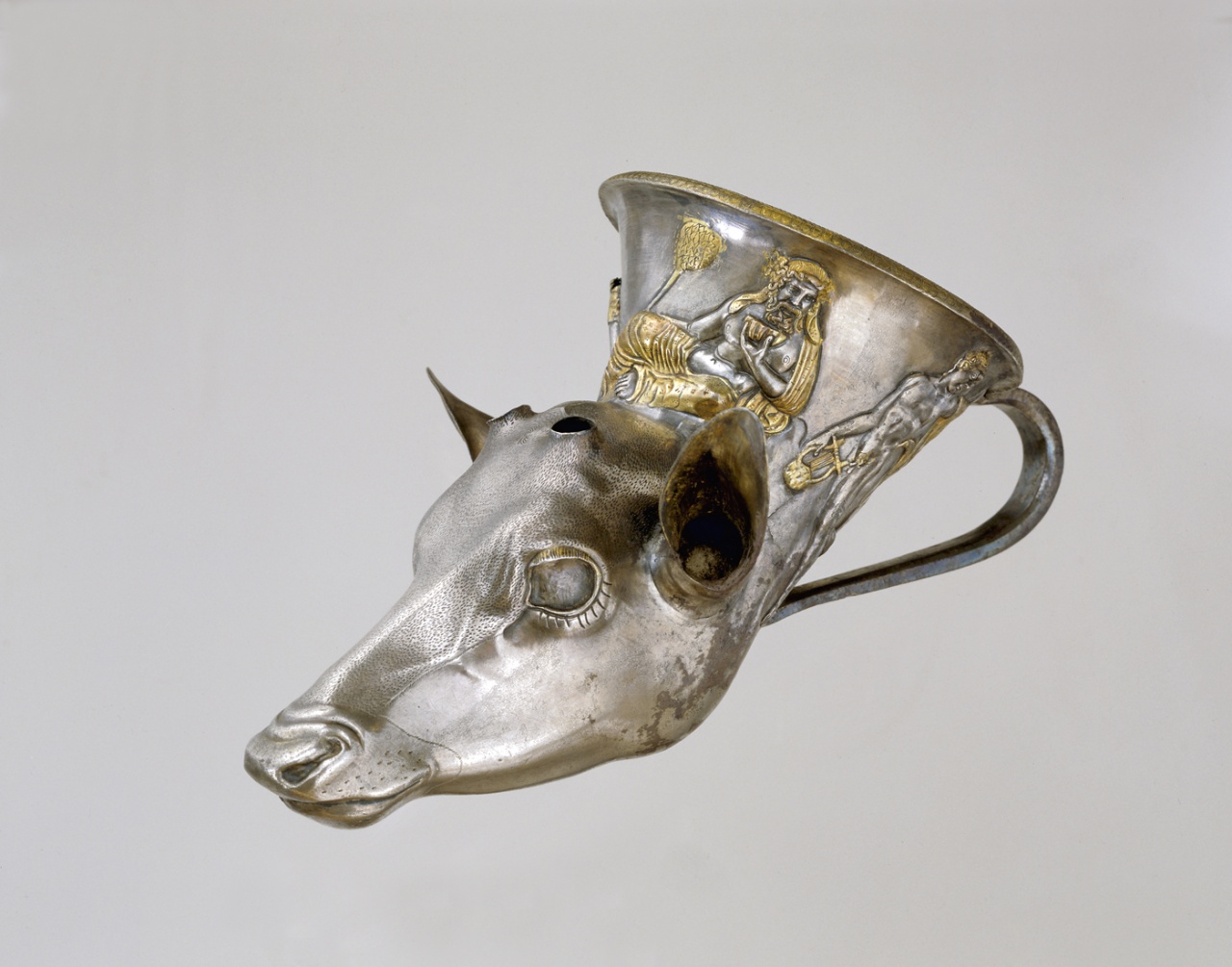 After the repoussé work delicate details such as the downy skin over the forehead and muzzle, the eyelashes and the little hairs around the snout and below the mouth, were chased in [1]. The upper eyelid was gilt. The lower eyelashes were once nielloed as were the nostrils and the mouth (as indicated by remains). Ears made as on the larger rhyton (cat. no. 152) folded to join at the base, the edges, applied against the side of the deer's head, held in place by three rivets that come through from a disc on the inside of the head. These are then worked down and, as with the join at the base, burnished. The handle forged, chased and soldered on. All the gilding done by burnishing on gold leaf.

Condition: missing: horns and small spout in centre of mouth. On the right side of the vessel's neck, the upper part of the female figure crushed and partially restored to shape, missing small fragments and others just above the deer's right ear. The latter bent and pushed in at the upper side of its base, now straightened out. Joins around the ears and section above left ear showing cracks. The inlay of eyes, fashioned as for cat. no. 152, also missing. Handle reattached.

The figures are partially gilt; insides of the ears, the upper eyelashes, the decorated edge of mouth and the engraved back of handle all gilt - gilding now somewhat worn.

The decoration on the neck of the vessel is composed of Dionysos [2], half reclining with right leg extended and left tucked up, his hair held by a scarf-headband, its tips over his shoulders and on either side of his temples locks of hair flutter in the breeze. He wears a mantle draped over his left shoulder, he is bare to the pelvis but his thighs and legs are enveloped in drapery. He holds the thyrsus in his right hand, and in his left a wide ribbed bowl. Turning her back to the god is a female figure seated on a ledge, perhaps an altar, partially reclining, supporting herself on her left hand, as she bends her head towards her right. With right arm extended, she holds a phiale with omphalos over her right knee. She wears a chiton and ends of drapery - perhaps a mantle - lie across her thighs; her feet are shod in slippers. Behind her right arm a child, bare-chested with a fold of drapery over his left shoulder faces to his right. Possibly they represent a nymph with child. Maybe this is Dionysos and one of his children such as Oinopion or Staphylos with their mother Ariadne. On either side of the handle and with their backs to it are young satyrs. The one on the left of Dionysos with beautiful arched tail advances like a Nijinsky with a light dancing step. His head slightly bent looks out over his left shoulder, with lowered right arm he holds a lyre and in his left thrown back and raised a double-flute; over the arm hangs an animal skin. His counterpart advances as though in ecstasy with his head thrown back, both arms stretched out. He holds torches (stalks?) in both hands and a panther skin, head and long tail visible, hangs draped over his left arm.

Should one attempt to differentiate the dates of these three vessels, this rhyton would be later than the other two. That is, if one follows H. Hoffmann's [3] theory with respect to later Apulian terracotta rhytons, where he observes that those with a sharper angle between the animal's head and the neck are later in the series. This implies that one both accepts his theory and that it also fits older metal vessels. It might then be that this rhyton could be dated towards the latter part of the first quarter of the 4th century B.C. However, in as much as it seems to bear fairly close comparison with the example from Tarentum [4], both for the handle and the angle of the neck, which has been dated respectively 420 and 400 B.C., it is probably safer to keep the dating to the early 4th century B.C. Its decoration is closer in spirit, we feel, to some of the precious metal vessels [5] produced with an Eastern Greek touch for the Scythians of South Russia, and the animal's head is particularly sensitive. Thus, might not this rhyton have been produced for a Scythian prince?

1 The detailing is slightly different from rhyton, cat. no. 152, both as to the tools employed and the workmanship.

2 Said by Melikian-Chirvani to represent King Midas associated with a ritual wine libation and commenting that, though the execution of the vessel is in a definite Greek style, the idea of such vessels is Iranian in origin as revealed by certain details. This Iranian character is evidenced by the gyrating solar rosette incised on the head to signify that the wine substituting for blood is liquid solar light (BAsInst, New Series, vol. 7, 1993, p. 26). We concur with the "Iranian influence" but do not agree that King Midas is represented since there is no explanation for the other figures, and we think that the solar motif is probably only used here as a decorative element.