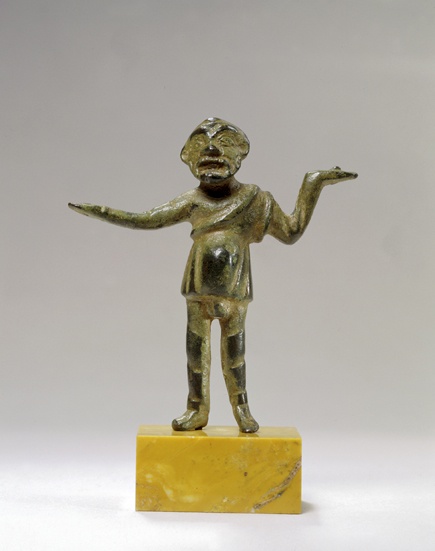 Solid-cast by the lost wax process with some cold-working, burnishing.

Missing: both serving trays with their lids once held in the upraised palms of his hands and fixed by two rivets still in place. Minor blows to top of head, patina scraped on upper right forearm, front of right foot stubbed and a couple of air bubbles at base of skull.

This amusing statuette of an actor represents a Phrygian slave either in the guise of a cook, a kitchen or banquet servant, a very popular character and one of the earliest in Attic Comedy. He is dressed in a long-sleeved undergarment, his phallus bound up (anadedemenon), and with leggings (anaxyrides) characteristic for comic actors. Under the lower part of his short-sleeved dress (exomis) fastened over the left shoulder, pads front (progastridion) and back (propygidion) add to his comic aspect. His mask is typical for the type and period with its high forehead, the huge arched eyebrows, the silenos nose, his gaping and over-sized mouth piece (formed by his beard and lips), a "spira" which served to amplify the voice, a feature especially characteristic of later Old and Middle Comedy.

He once carried a large dish with turning cover on each upstretched palm as in the Olynthos [1] example.

The type originated in Athens and there are comparable examples in museums, usually very similar in stance, but with variations for the expression of the mask, Far more frequent, however, are terracotta masks and statuettes. The Olynthos actor has been dated 380-350 B.C. Ours differs slightly from other examples in that he is somewhat more compact and harmonious in structure. Most appear [2] more like stand-ins, somewhat more comical in the way their limbs protrude from the body in a less organic fashion, probably differences due to the workshops that made them. Here, he appears to have suddenly stopped to declaim; he already makes us smile as we look at him. He is surely Attic of the time of Aristophanes' early Middle Comedy and to be dated in the early 4th century B.C.

For this entry we have adopted and closely followed the information contained in D.M. Robinson: Excavations at Olynthus X. Metal and Minor Miscellaneous Finds (Baltimore, 1941), pp. 1-6, pl. 1.

2 Judging from photostats of photographs in comparison with the original which may be misleading.