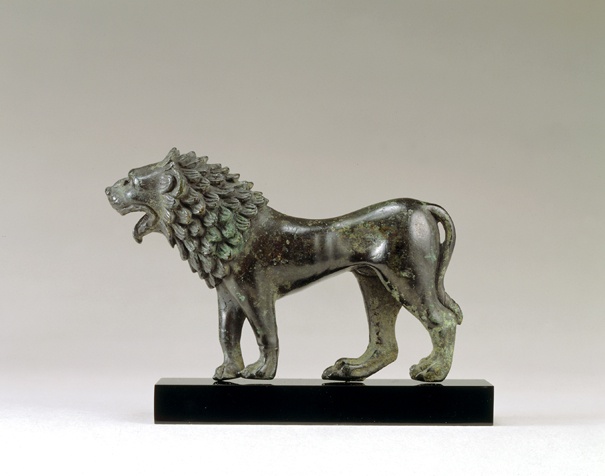 Solid-cast by the lost wax method, carefully and elaborately cold-worked, burnished and polished.

Condition: patina a black olive green, traces of cuprite, pin-points and patches of green, slight abrasions to surface, a scrape on back behind mane reveals a yellowish metal, greyish earth incrustations on left sides of hind legs. The right foreleg and paw bent back slightly inwards out of position, the third claw abraded. The odd small nick and a blow to rump.

A loner on the look out, with his hungry flanks, and his tongue hanging out in expectancy, the lion prowls possibly in the hope
of prey.

He is difficult to place or compare. In certain aspects there would seem to be a rapport with the famous chimaera from Arezzo [1] in Florence which may be slightly later than the date usually ascribed to it. What they have in common is their multi-layered mane, the tufts less flame-like on this small example, and a similar rendering for the ears, though in this case they are striated but smooth on the Arezzo chimaera. One could also compare their muzzles, but what really makes them comparable is that they are lions and both extremely well executed. Stylistically, Etruscan artistic production is sometimes very close to works from East Greece.

Though later in date, around the middle of the 4th century, and bearing a rapport, are the lions in the British Museum [2] from the Mausoleum at Halicarnassus. There are also the lions from the marble group from Sinope [3] dated in the second quarter of the 4th century.

Lions were produced in considerable number throughout the classical world and in the 4th century often associated with funerary monuments. For a later example in marble, but of a very different style because he is Attic, is the large lion, cat. no. 160.

With no close parallels but given his style and to a lesser extent the indicated provenance, he must be an East Greek work, possibly to be attributed to a Chiot or Ephesian workshop.