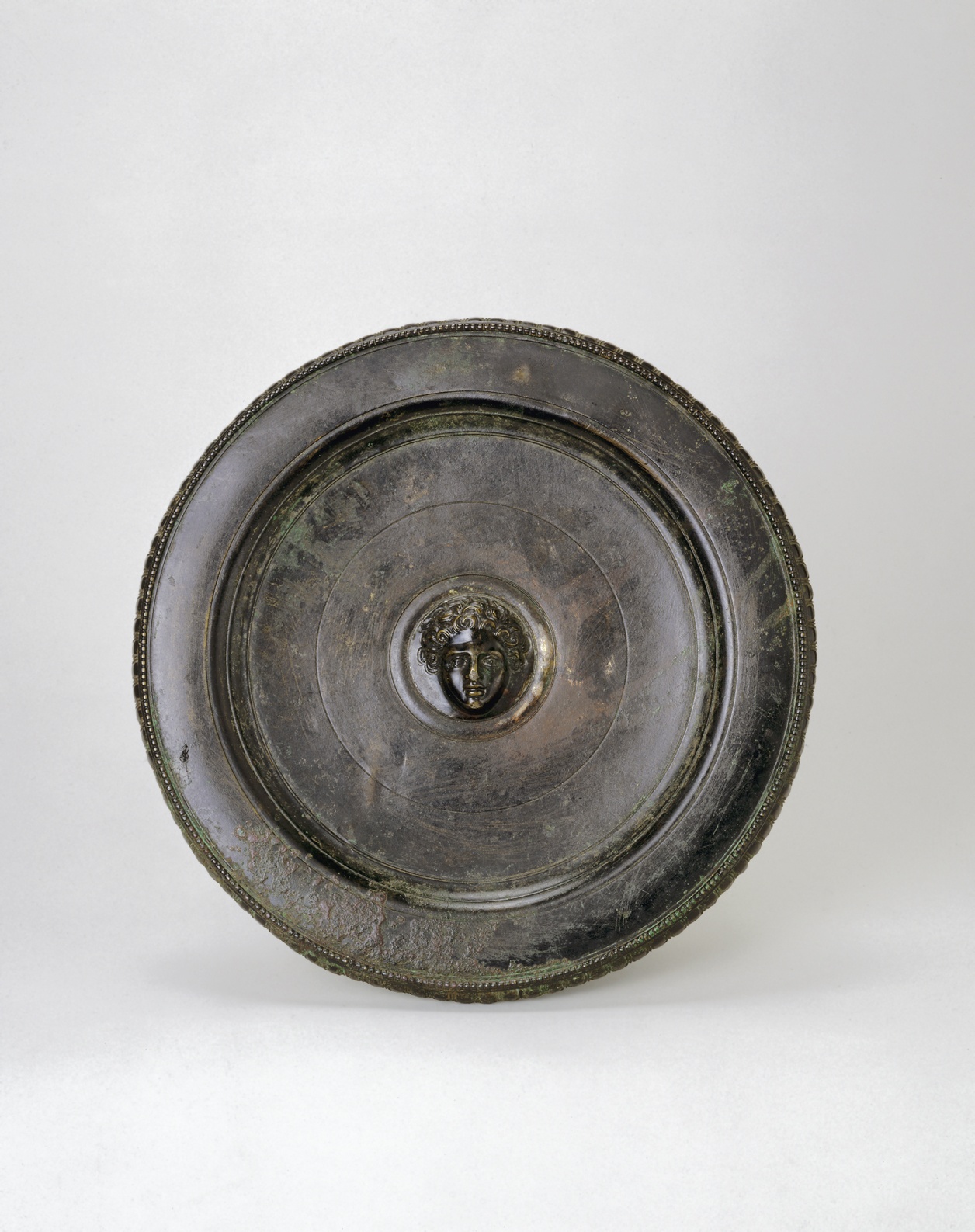 Solid-cast, turned on the lathe and extensively cold-worked, burnished and polished. The medallion worked separately in repoussé, filled with lead and soldered on. At the back traces of an attachment, probably in the form of an acanthus, with a hinged loop to enable suspension.

Condition: patina a blackish green with metal showing through here and there, varying in shades between warm to bright yellow, medal bronze, rust brown and reddish copper. A section of the border with crusty cuprite and green cuprous chloride. Traces of earth deposits. Traces of soldering around the medallion and where the attachment was fixed at the back.

The tip of the nose and a spot on the chin of the medallion worn away revealing the lead filling. The outer border of the plate warped at about 10 degrees where, owing to pressure, the thickness of the handle would have pushed it out of shape. Since manufacture the medallion probably reaffixed because of traces of soldering and not in the axis of handle.

The plate is decorated in its centre with a medallion in relief representing a youth [1]. The outside of the raised border ends in a pearl rim above an egg-and-dart motif. The underside of multiple concentric circles of varying breadth and planes is comparable to terracotta examples though far more sophisticated and elaborate than any of these. Traces of soldering and a vague outline indicate that there was an attachment possibly in the form of an acanthus or palmette with a hinged loop to enable suspension, though it might have been in the form of an animal mask, maybe a lion or panther, though the latter is usually found on vessels of an earlier date.

We know of no direct comparison. It is more like a decorative tondo than an utilitarian vessel, with its border similar to those of mirrors. Its alleged find-spot in the Galaxidi plain below Delphi would suggest that this is a temple offering [2]. Probably from Delphi, it was either buried in order to hide it or looted and dropped during barbarian invasions.

There is a rapport for the medallion with the protomes at the bottom of silver chalices such as those found in Macedonia [3], though these are completely in the round. The author, when he saw the head of a woman in relief in repoussé on a box mirror in former East Berlin [4], labelled Corinth, mid 4th century B.C., thought that it could be related to the medallion for the way the hair is worked, though not for its style, the mouth and the shape of the nose. However, after having recently received [5] a photograph, he is somewhat unsure of this. It is more likely to be a rapport due to the type, an applique, and the period involved. Another comparison is an applique in repoussé in the Louvre [6] from a volute-crater; it is from Galaxidi, ascribed by S. Karouzou to a Corinthian artist.

Bearing in mind the comparisons and the ascription of many of them to Corinth, and the fame of Corinthian metal plate in the 4th century B.C. as attested by Pliny [7], our votive dish is probably Corinthian.

1 In the past sometimes described as that of a maenad (Meisterwerke griechischer Kunst <K. Schefold, p. 88, whereas the author had said "... head of a youth">, Primitive to Picasso, The Search for Alexander, p. 15 <D. von Bothmer>). The author's original identification shared by A. Delivorrias who on a visit, 8 November 1991, said "not a maenad because of the short hair". It is unlikely, though possible, that it represents a head of Medusa.

5 We are very grateful to Agnes Schwarzmaier for the photograph received 2 October 1993 and her remark that its provenance from Corinth is uncertain and that she cannot include it in her Corinthian workshop. Also for her comments about the difficulty of assigning schools to productions that are wont to be found on different sites, their workmanship obviously from different centres of production. She proceeds to create workshop groups based on "little craft indications as foldforms and so on".