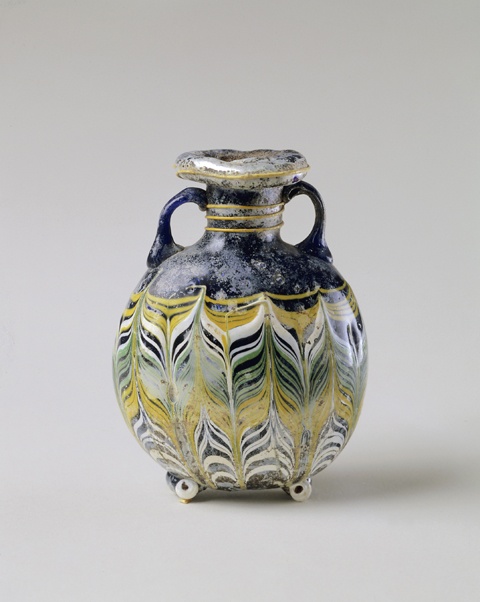 Core-formed glass originated in Mesopotamia and Egypt in the Late Bronze Age. It underwent a revival in the east in the 8th century, and in the Greek world was much produced on Rhodes between the 6th and early 4th century and thereafter in Italy, followed closely by Alexandria.

It was made [1] by winding trails of molten glass around a core probably composed of mud that was built up over a metal rod. The outside was heated, marvered and tooled. The decoration of opaque coloured threads was added in the same way, followed by the foot and the handles. It was carefully annealed and the core removed.

Our vessel is core-formed, has a rim disc, vertical handles and rests on stand-rolls. The body is patterned with ten vertical feather panels made by dragging the horizontal trails alternately up and down. Three yellow trails around the neck and one underlining the lip.

Condition: most of the surface covered with a sheen, slight weathering in a few spots with iridescence and traces of lime deposits.

There are similar pieces in the British Museum [2] and Toledo [3].

1 We are indebted to Gawain McKinley for enlightening us as to certain technical details.