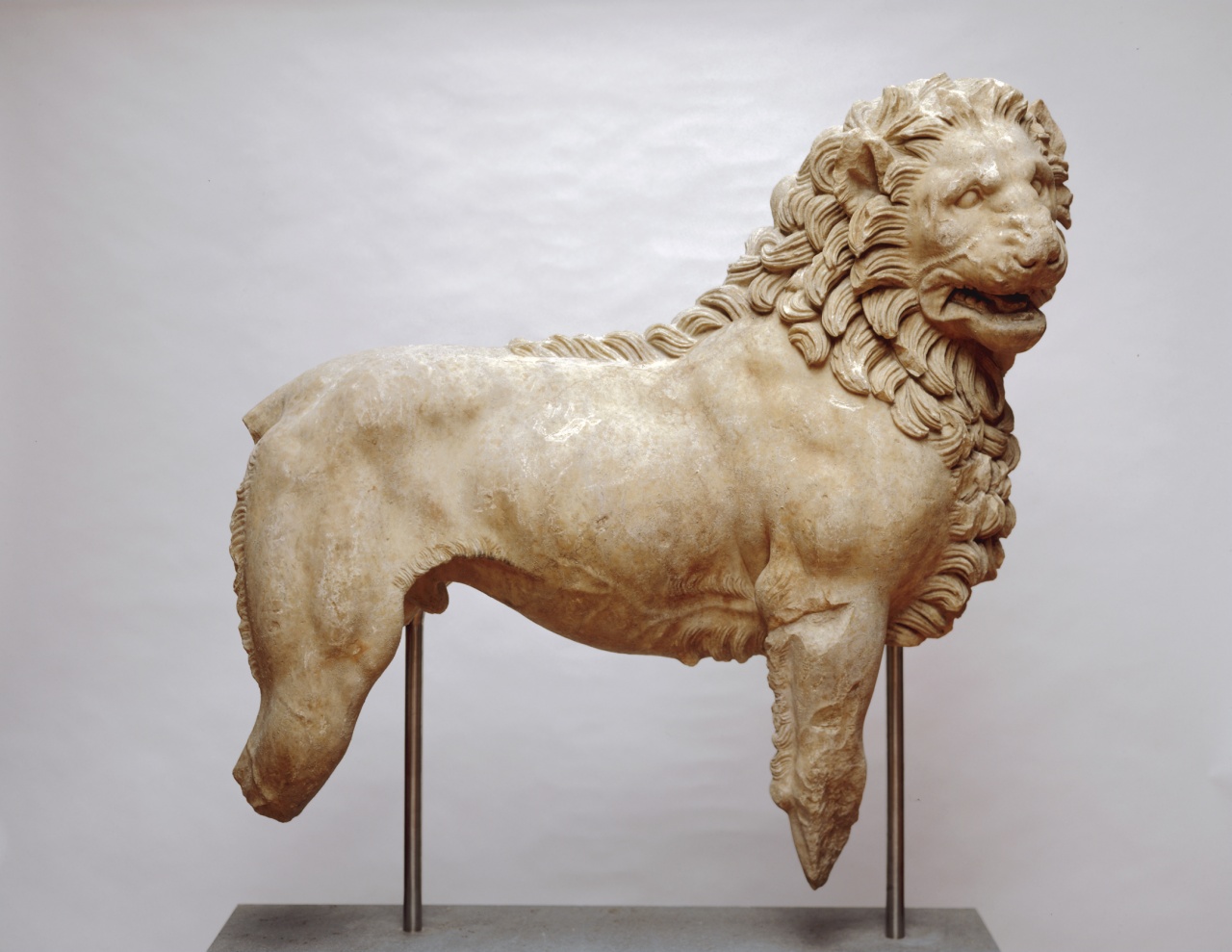 Sculpted of a block of whitish marble.

Condition: the surface of mottled and uneven colour with iron oxide patches and incrustations of whitish grey limestone deposit.

The front right leg, with a sliver and its lower section missing, reattached; missing: all of the left foreleg, the left hind leg, the lower part of the right hind leg and the tail. The left side, mane, shoulder and thigh seriously abraded as is also the stomach. The muzzle, right cheek and right eyebrow slightly abraded. Ears and several tufts of the mane chipped; the odd nick over the body.

Symbolizing strength and courage they were usually placed on the graves of heroes of which they were the guardians [1]. U. Vedder wonders whether in 4th century Greece this funerary symbolism still played a role or whether lions had become
simply representative.

In the round they were sometimes shown seated on their haunches - (the lion of Chaeroneia 338 B.C., with which our lion bears a slight stylistic rapport though the weathered condition of the former makes any comparison as to details difficult) - but the stance usual in the last quarter of the 4th century is cowering, positioned to attack, probably after an attitude common to dogs.

A considerable number of Attic 4th century lions in the round associated with funerary monuments have survived in various states of preservation, C. Vermeule lists some forty-eight [2], we would guess the total might reach some six dozen.

This lion is standing and we have found no reproduction of another standing lion of the second half of the 4th century. He is somewhat more regal and static than the vast majority of such representations dated in the last three decades of the century, suggesting that he is slightly earlier. He is still classical and to be placed in a 330s context.

It is hazardous [3] to attempt to give pertinent comparisons. However, we would venture to suggest that the following lions are somewhat related: the later example in Athens [4] for the eyes and the way the mane frames the face, the Piraeus lions [5] dated by C. Vermeule and U. Vedder around 320 B.C. very similar for the shape of the deep-set eyes and for the line of the mane on the back. Their heads rounder and less angular and the snout less pointed, and the lion in Copenhagen [6] that has a similar head with the tufts of his fur around his head and down his chest extremely similar, almost as though by the same hand, and a lion in Athens [7].

Visiting the Piraeus Museum in 1994, the author sensed that there was a similarity between the lion and the head of an old man [8] from a funerary relief dated third quarter of the 4th century for the way the surface was treated, hollows and contours, outline of eyes, creases of brow and the feel of the hair and beard.

It seems possible that our lion with his undramatic stance bears comparison [9] with the calm body of the youth on the Ilissos tombstone from Athens. Surely, if such a tombstone was made by one of the leading Attic masters of the time "whose influence on Greek funerary sculpture can still be traced" [10] , it is more than likely that a first-rate sculptor could have produced a different funerary monument such as this lion. If one feels that its ethos corresponds to the late period of Scopas usually dated around 340 B.C. or soon thereafter, the comparison is valid. It is certain that some of the best funerary sculpture contemporary with our lion must have reflected Lysippan and Scopaic influences.

3 On photographs made from different angles with different lighting, from small reproductions in archaeological reports
and photostats.

7 National Museum 4001. This last is an indication given to us by E. Berger following his visit in Autumn 1993.

8 Piraeus Museum 191; however, it may be that the resemblance is only due to the ethos of the period and the general way
of sculpting.