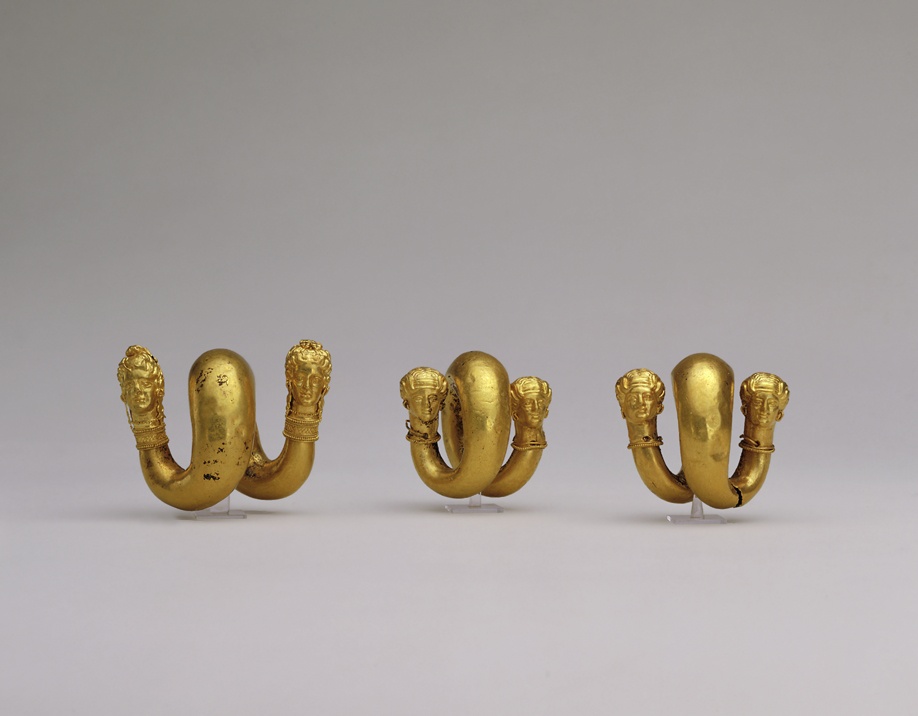 The spiral tubular element [1] and the head protomes of thin gold sheet, the latter made in two halves from a mould and then soldered together. Placed over the ends of the tubular element they were held in place.

a: on a tubular section which covered the join between the heads and the spiral. The heads with additional repoussé work and finely chased with elaborate ear-rings made separately, inserted by means of a hook through the lobe of the ear and spiral pendants of one piece of wire soldered slightly forwards (to a strand of hair?). A wire necklace, the front half with round beads, encircled the necks. The tubular joining section elaborately embellished with an undulating filigree wire, straight, roped and gadrooned wires.

On b. the heads are held by a wire that circles the base of the neck passed through holes front and back; on the edge of the neck a decorated wire was soldered on; spirals - a simplified version - formed of two pieces of looped wire were soldered below the ears on the head protomes.

Condition: a: the spiral element with a large dent and a few small ones, its ends slightly torn. The face of one of the protome heads slightly damaged and restored to shape.

Scholars are unanimous in ascribing such spiral ornaments surmounted by female protomes to Tarentum, though there is controversy as to whether they are to be considered as hair-rings or ear-rings. B. Deppert-Lippitz [2] describing a pair with lion heads dated in the first half of the 5th century, on the basis of tetradrachms from Syracuse [3], says that these prove that they were worn not only on the ears but through the ear lobes. She states though that they have been repeatedly interpreted as hair ornaments. However, she is using coins from Sicily, quite distant from Tarentum, though these ornaments, fashionable and highly prized at the time, were surely exported throughout Magna Graecia and Sicily, which the alleged find-spot of the present examples supports. Coins are struck with a die and it is difficult to show clearly in low relief the detail of how they were hung, which would have been of little import; what was important was to embellish the head on the coin with a becoming ornament. We disagree because we believe (as we did with the two hair "clasps", cat. no. 100), that the the top centre of the spiral is too large in diameter to fit through a Greek kore's ear. Though they may have been adornments for the ear, they were strung probably on a thread. But how these were worn is open to question, whether around the ear, through the lobe on a wire or possibly attached to the hair.

But who better than the goldsmith himself who makes such precious jewellery would be able to tell us how they were worn? Spiral a. gives us the answer. Note particularly that both female heads are shown wearing long elaborate ear-rings and hanging in front of the lower part of their ears and attached to the hair are spirals, here made of twisted wire surmounted by conical elements. The undamaged head on spiral a. is the finest example we know of. It is a magnificent rendering of a beautiful woman, her neck adorned with the best of filigree work, a Tarentine speciality. The different embellishments are rendered with infinite detail, even her necklace, a wire to which are fixed globular pearls, is attached at the nape with a loop and hook. Heads also adorned ear-rings as pendants. These were composed of a rosette formed of multiple petals and bordered by pearl motifs, from which the head hung framed by long pendants attached to each side of the rosette. Such an example was on a terracotta head of a woman found in Tarentum [4]. This last resembles in type the heads of pair b. There are slight variations between such heads with respect to their coiffure; sometimes they even wear a Phrygian cap [5]. A very close parallel to our pair b., and maybe even by the same hand, is an example that was in a Geneva collection [6]. The necks of all these heads are enriched with filigree work from simple embellishment to highly elaborate, as in the large example a.

These heads are usually considered to represent Aphrodite as depicted on Apulian vases [7]. Such jewellery was worn but also offered as dedications to deities.

1 In no book or catalogue has the writer been able to find an explanation as to how this element was made. It was not cast and the conclusion must be that an appropriate gold strip was shaped by hammering and annealing and then folded, the seam completely worked out by thorough burnishing and polishing, though no traces or the slightest indication of such are visible on any of the present three examples.