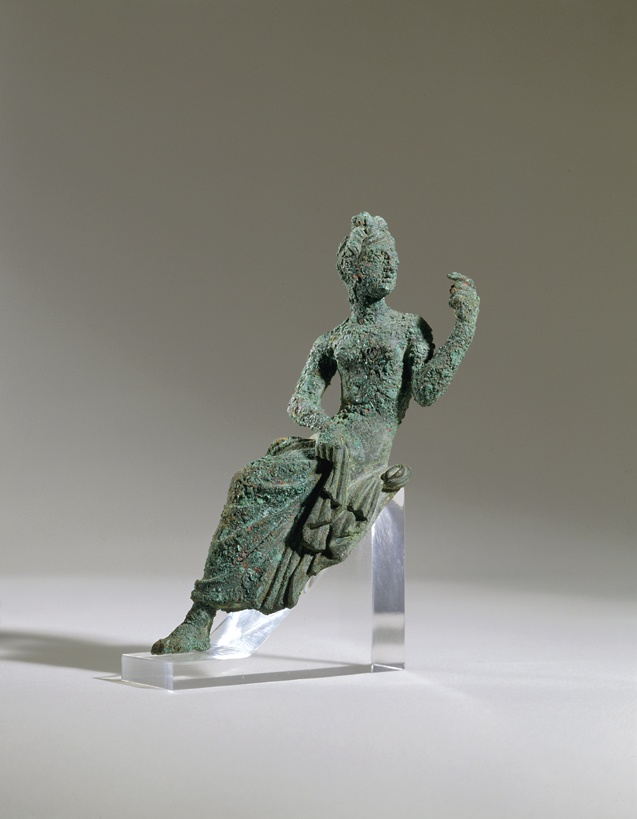 Solid-cast by the lost wax process and considerably cold-worked, burnished and polished. The right foot cast separately was inserted under the skirt in a niche prepared for the purpose. The back slightly hollowed out to facilitate soldering and enable better adhesion to the vessel's shoulder.

Condition: patina a greyish green with thick incrustation, granular green of various shades and with spots of cuprite.

This statuette in a semi-reclining attitude, her lower limbs covered in a himation, raises her left arm which probably held a mirror as she looks at herself, possibly after bathing. There was a pendant [1], a similar figure, possibly one of four, that was surely fixed also as adornment to the shoulder of the vessel, maybe a small volute crater. The best comparison is a beautiful figure in London [2] of a youth in high relief said to be from Lake Bracciano and described as Greek, c. 300 B.C. His attitude, modelling in the round and clothing are similar, as was probably his function.

W. Lamb [3] discusses Greek appliques from South Italy: decorative relief work that adorned armour, the London youth, and among others a situla in Boston [4] dated to the second half of the 4th century. She ascribes the above examples to Magna Graecia, and we concur.

Our applique is probably Tarentine and a charming comparison gives weight to the attribution. It is a Hellenistic terracotta figurine of a young woman [5], standing on tiptoes, admiring her body. Similar are the shape of the face and the hair, but above all the modelling of the body, breasts, arms and the hollow formed by the spine.

1 Found with it and once on the market, present whereabouts unknown.