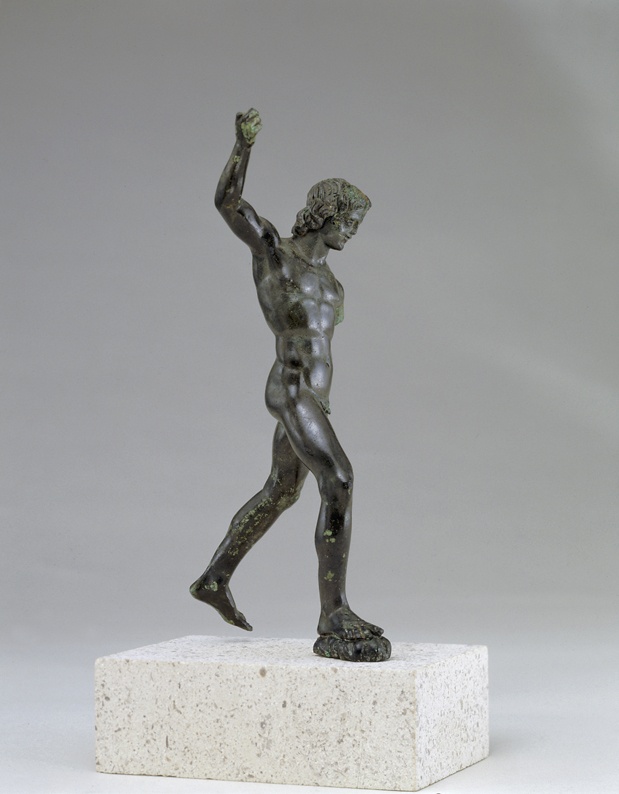 Solid-cast by the lost wax process, very carefully worked in the cold, burnished and polished.

Missing: the left arm, which was possibly once damaged in casting and reattached, annealing it to the shoulder with hot metal as indicated by the different colour metal below the shoulder (see air bubbles at the join), the index of the right hand and the spear it held. The face: the left eye damaged with the cheek pitted, a flake on the forehead and to the right of the right eye. It would appear that the face was left unfinished or was modified after finishing on account of a wish to change the expression, as though the artist hacked at it in a rage at not achieving exactly what he wanted.

This youthful figure of Alexander portrays him as he rushes forward to spear an animal in front of him slightly to his left. For the stance there is a figure on the lion-hunt on the painted frieze [1] of the tomb of his father, Philip II. On the viewer's right the latter is on horseback spearing a lion and in the centre of the scene a horseman (Alexander?), his head wreathed and with his right hand upraised, prepares to hurl a spear against the same beast from a distance. But almost as central and slightly to the horseman's right a wild boar set upon by dogs is about to be speared by a naked figure in a similar stance to our Alexander.

Our statuette is an original of exceptional quality, a one and only, and thus very difficult to ascribe correctly, since comparisons are lacking. We believe it is not impossible that this is an original by Lysippos, and if not surely by one of his immediate followers.

"The early Hellenistic period is ... the most obscure phase in ... Greek sculpture with Pliny's cessavit ars of 292 the chronology, never completely secure even for the 4th century suddenly becomes chaotic, ... the school of Lysippos is an enigma for the first quarter of the century and apparently peters out in the third, ... " [2].

There is no comparable statue or statuette but a marble portrait of Alexander [3] found near Pella and ascribed to the end of the 4th century B.C. [4] - "in some respects" maybe "a close reflection of a Lysippan prototype" [5] - and a portrait of him from Megara in Malibu [6], dated around 310 B.C. are very close for the shape of the face, the line across the brow, the almost uniform thickness of the nose throughout its length, the deep-set eyes, the thickness of the neck, and the tilt of the head and general feel of the hair. A later version of the type and deriving from the above is the head in Olympia [7], dated to the last quarter of the 3rd century B.C.

However, the style of our statuette fits perfectly the characteristics that Pliny [8] ascribes to Lysippos: "He is said to have done much to advance the art of sculpture in bronze by his careful treatment of the hair and by making the head smaller and the body more slender and firmly knit (corpora graciliora siccioraque) than earlier sculptors, thus imparting to his figures an impression of greater height. There is no Latin name for the 'canon of proportions' (symmetria) which he carefully observed, exchanging the square-built figure of the older artists for a new and untried system"; also "extreme delicacy of the work even in the smallest details" was Lysippos' most individual feature.

Our statuette has a very small head in proportion to the whole. The body flows tightly knit with its firm elongated musculature, the hair is carefully and deeply grooved, the feet are realized with utmost sensitivity: the toes detailed and the instep, ankle and Achilles' heel modelled with great purity. Among Lysippan details enumerated by F. Johnson regarding a statue in the Vatican [9], accepted as a copy after Lysippos, are the hands and the rather long and flat feet very carefully made, the neck rather thick with the larynx marked off by grooves, characteristics that apply to our statuette.

Since Lysippos is credited with major changes in sculpture these surely were in the systems of proportions. To slightly modify the Polykleitan canon with its square-built figures would not have justified [10] this reputation.

Lysippos who became Alexander the Great's court sculptor, surely very active in the second half of the 4th century, lived to an old age (probably into the first decade of the 3rd). He was very prolific and reputed to have made fifteen hundred statues.

Would it not be in keeping with Alexander's intrepid impetuousity to jump off his horse, to confront the wild boar on foot, and as here - a youth - be represented in heroic nudity?

However bold the suggestion, the name of Lysippos inevitably comes to mind. Maybe a "bozzetto" for proposing or submitting to Alexander the Great himself, or a work of one of his immediate followers, one of his sons or maybe Teisikrates, a second-generation sculptor of whom Pliny says "a Sicyonian also, the one who has the narrowest ties to the school of Lysippos". The statuette is, in our opinion, too exceptional to be placed differently [11].

4 Though J.J. Pollitt (Art in the Hellenistic Age [Cambridge, 1986], p. 21 fig. 6) tentatively dates c. 200 to 150 B.C., its long mane of hair richly flowing characteristic of portraits of the 'heroic Alexander'. The "sort of image which came to express the spirit of the 'Alexander legend'". However, he adds "its relative lack of dramatic exaggeration, however, and the way the general treatment of the eyes and hair approximate those of Greek sculpture of the late 4th and early 3rd centuries B.C."

9 The so-called Apoxyomenos in the Braccio Nuovo: Johnson, F.P.: Lysippos. A study of the work of Lysippos, and an attempt to identify in existing sculpture copies of his original works (Durham, North Carolina, 1928), p. 81 ff., pl. 12-13.

11 A. Trofimova (Bronze Statuette of "Alexander Hunting", pp. 8-10, 24-25) says that it is a modification of Lysippan style in the Hellenistic period and is not to be dated earlier than the end of the 3rd century B.C.; but, A. Delivorrias, on a visit on 8 November 1991, said that its movement was Lysippan. At the opening of the exhibition Ancient Art (December 1954), a Lysippan specialist, E. Sjöqvist, said to us that this statuette gave him for the first time in his life the feeling, an impression of what Lysippos' statue of Kairos must have been like. For the first time he said he could visualize it.