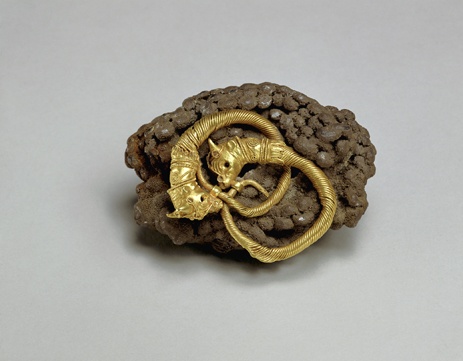 The protomes hammered and fashioned from a lump of gold and fitted over the wider end of the hoops, the latter made by winding gold wire over a long horn-like core. The heads themselves considerably cold-worked: chiselled, chased, punched, with decorative elements added of plain and beaded gold wire and beaded spirals annealed on. On the foreheads a small calyx with beaded rim to receive an inset - glass or precious stone - and the eyes hollow for inlay. A thick gold loop under the lower jaw of the bulls to allow insertion of the narrow end of the hoop, here composed of strands of wire annealed together.

The necklace a chain of silver links (?).

Condition: hoops slightly bent with a slight crush on each. Inlays missing. The necklace now a lump of silver and silver chloride. Traces of wool thread (visible under a microscope).

Hoop ear-rings of this type appeared in the second half of the 4th century B.C. and most of the earliest that come from dated contexts were found in Macedonia and Tarentum [1]. They became popular throughout the Greek world during the Hellenistic period. The earliest ones had lion protomes, later other animal heads and humans - Negro heads, maenads and sometimes half figures - are represented. The bull headed examples would appear to be a Ptolemaic speciality since most have been found on Cyprus and in Egypt. An important jewellery hoard with several very similar specimens was found in the ruined temple at Toukh el-Qarmous (Egypt) [2], destroyed around 240 B.C., which gives a dating of around 270-240 B.C.

The traces of wool may suggest they were once placed in a little bag or wrapped in cloth for safe-keeping.