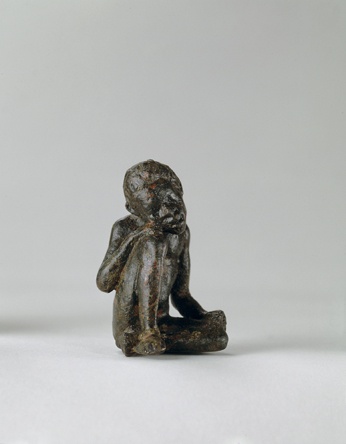 Solid-cast by the lost wax process and worked in the cold. Originally an element [1] was inserted on top of the head, of which only a small knob remains.

Condition: patina dark green with cuprite here and there, the surface in places scraped down to the underlying brownish metal. The whole considerably worn and with earth deposits.

This Negro youth, an Ethiopian slave or servant, is shown squatting in a position that harks back to a type found throughout the Greek world. It originated in the early 5th century B.C. and carried on through Roman times [2]. His most attractive antecedent is the magnificent sleeping youth in bronze said to be from Dodona in Vienna [3]. His body is relaxed, but the curls of his hair, the thick lips and the broad flattened nose are a beautiful stylized rendering of the same Negro features as on our statuette. Early examples in terracotta found at Selinunte were grave goods, those from the Malophoros sanctuary votives [4]. There are others from Rhodes, at Lindos [5] and Camiros [6]. The motif appears on gems [7] of the second half of the 5th century, and in a bronze statuette [8] which was the finial of a candelabrum from Vulci. Usually said to be sleeping: weary of waiting and sometimes shown in Hellenistic art with a lamp at his side to accompany his master home.

A close parallel for the position and size is the statuette in Copenhagen [9]. His back is more curved, his left hand rests on the ground and the right side of his face leans against his hand above the knee. On our example, the back is far straighter, the hand is on his lower left thigh and the head turned also more erect, rests on its lower right cheek. These variations denote different purposes: the Copenhagen example surely surmounted a vessel, possibly the finial of a candelabrum, whereas here, the little knob on top of the head, the remains of a broken hooked rod, would have enabled use as a steelyard weight. Thus the need for a more compact vertical construction.

His style suggests a late Hellenistic date and his patina is typical for Egyptian bronzes.

1 Either a rivet to enable fixing to a plate or tray, or a rod that ended in a hook.