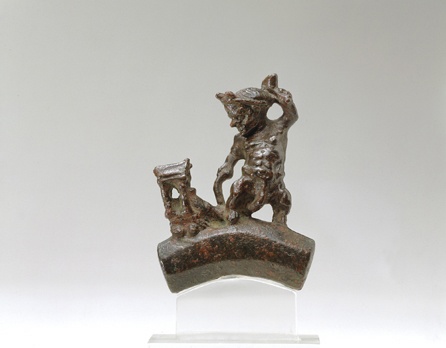 Solid-cast by the lost wax process and touched up in the cold with a large circular hole under the faceted, curved section.

Statuettes depicting grotesque figures, caricatures, parodies, mimes, dwarfs, and others were very popular in the late Hellenistic period. It is usually thought that they originated in Alexandria, though they were surely made also in Asia Minor as well as in Rome. A favourite type was the dancing dwarf with large phallus, sometimes shown fighting his own monstrous member. Here, with a hooked bar, he appears to have just removed its tip from a temple-like forge and is about to strike it a mighty blow with the hammer in his upraised left hand.

Spirited comparisons are a dancing dwarf in the Louvre [1], and one in Vienna [2] possibly about to hit the end of his distended phallus with a clapper. All three probably from Alexandrian workshops.

We have no explanation for his function; he possibly surmounted the lid of a vessel or served as the handle of a small skewer.