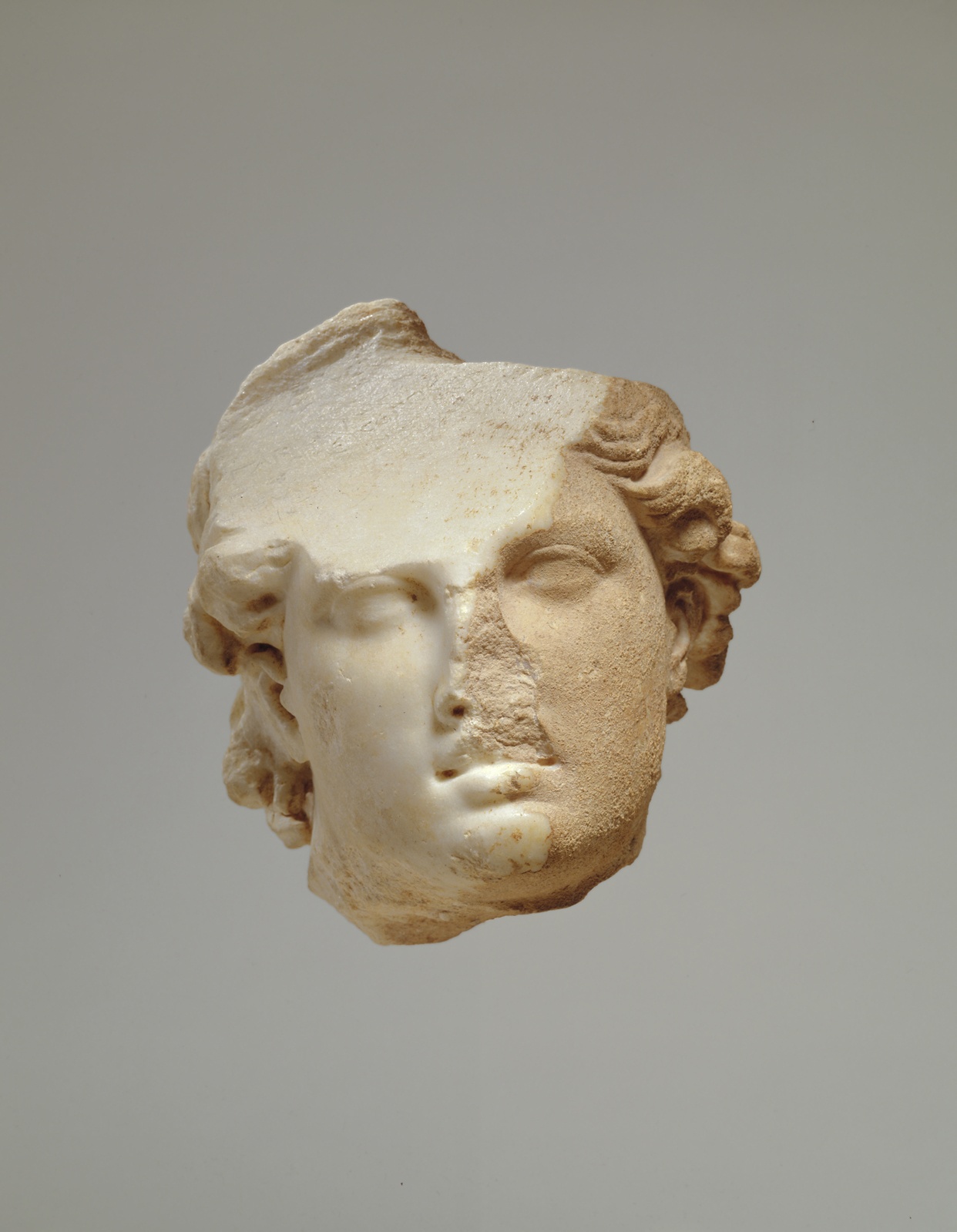 167. Portrait Of A Syrian Ruler - Hellenistic

Sculpted of fine-grained marble, at the back a large inclined section of wide open V-shape bears traces of rasping and was completed originally in plaster as evidenced by stucco remains.

Condition: the left side of the head and the back with fairly smooth limestone incrustation of a warm reddish brown colour. The forehead worked away [1], inscribed, with the right side of the head thoroughly cleaned and the marble very slightly ivory-coloured. Its right side with chips and missing several hair locks, a chip on the cheek - considerable part of nose missing and upper lip - broken at the neck just under the chin.

This portrait is said to be of the Macedonian (?) general and condottiere who usurped the Seleucid throne to become King Diodotos Tryphon [2], he ruled from 142 to 139 B.C. Taking advantage of squabbling between Demetrios I, Ptolemy VI and Alexander Balas, he murdered the young prince whose protector he pretended to be, broke away from the Seleucid dynasty and proclaimed himself "Basileus Tryphon Autokrator" (Tryphon, King in his own right). His reign ended when the young energetic Antiochos VII came back from exile in Sidon, a Greek city, to claim his rights. The troops rallied to the rightful heir and Tryphon committed suicide in Apamea [3].

Both alleged find-spots would be most appropriate for a portrait of Tryphon, for he started his career at Larisa and the seat of his reign was in the region of Apamea where he ended his life.

The basis for the identification is by comparison with his coin portraits and his distinctive hairstyle [4], with a slight difference, as on the coins [5] it is more unruly and reaches further down in the nape. However, marble sculpture does not permit the same freedom of execution. Also, the feeling we get from the surface of the head with its lack of tension and movement fits the period [6].

On the diagonal front plane there is an inscription which is later than and bears no relation to the portrait. The head was surely discarded following Tryphon's suicide and reused for a votive inscription soon thereafter, dated by H. Seyrig [7] still
in the 2nd century B.C. It is a votive dedication from a certain Panderos to Artemis, no doubt in a sanctuary of the goddess in Syria. It reads:

(Seyrig, H.: op. cit., fig. 2. The letters in dotted
lines are restitutions.)
Panderos, son of Panderos,
saved [8] from great dangers,
(offers this) to Artemis,
in fulfilment of a dream.

May we suggest that Panderos, possibly a soldier lucky enough to have escaped the bloodbath that followed Tryphon's demise, used the discarded head of the usurper for a votive dedication to Artemis?

1 Whether when made, which is probable, or later on is open to question.