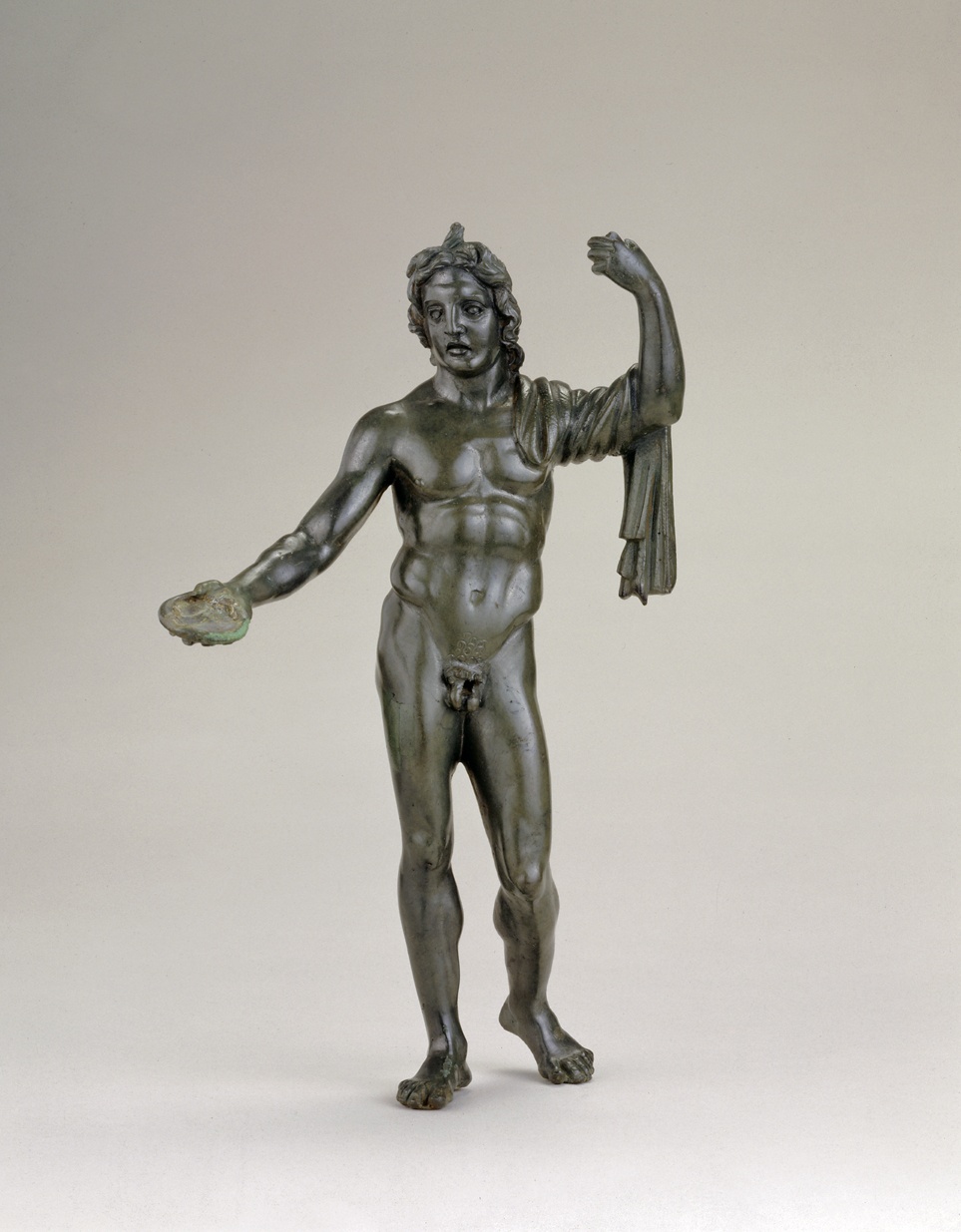 Solid-cast by the lost wax process, the penis made separately and inserted, as were the left index and the lance or staff (all three now missing). Two large sections on upper right thigh and left buttock with inlaid patches of great precision and a small round inlay on upper part of left foot to camouflage a casting bubble. Considerable cold-working with careful burnishing and polishing.

Condition: patina a greyish green with a yellowish beige hue in parts, the inlay on upper right thigh slightly different and on buttock a bright green. The patera with limestone deposit and a section of its rim chipped. A scrape to upper right foot.

This statuette illustrates a new koine that owes its origin to the representation of the 4th century Alexander by Leochares as exemplified by the Rondanini head [1] with its flowing hair. The type was adapted for rulers or deities (e.g. Zeus, Poseidon or the Dioskouroi). It gives the feel of being a portrait with details such as the high round forehead with its furrow and the bulge above the brows, the mouth and other features. It closely resembles coin portraits of the 3rd century B.C. with the slightly hooked nose and slightly open mouth, such as the one of Demetrios I Soter. For the period in general it also shows a rapport with marble heads as for instance one in Venice [2], possibly Ariarathes V, dated around the middle of the 2nd century.

In short, it owes much to Greek art on account of the charismatic Alexander whose idealized and heroic images were a strong stylistic influence. However, it lacks a characteristic feature of the type, the direction of the glance. Greek originals are usually shown with an upward glance such as the contemporary head in marble of the god Helios from Rhodes [3] which bears distant comparison for the general shape of the face, the mouth and some of the hair. Our figure is a Hellenistic Etruscan bronze in its own right that exemplifies Etruscan receptiveness to foreign influences. It is a local product revealed in the way the body is built as though of different segments, and in its static and expressive appearance [4]. Similar statuettes sometimes represented local Etruscan deities.

The phiale in his right hand is a feature favoured by the Etruscans that carried on down through Roman times, as shown on the Lake Nemi figures, for example a bronze in Boston [5], a late expression of this koine in his attitude, hair and general build. Other features are his headband and the staff or lance which he held in his upraised left hand.

The tuft of hair rising straight up between the locks over his forehead is somewhat of an enigma. We feel that it is really a tuft of hair though W. Wohlmayr who has carefully published this statuette thinks that it is a "Zapfen" [6], probably part of the star of a Dioskouros. Having carefully examined this detail, we are sure that it was, as now, a tuft [7] of hair. Maybe the artist's original intention was to place here the Dioskouroi star but on second thought considered a tuft of hair preferable. Dioskouroi may be represented without a star.

Various features of this bronze find parallels in other statuettes, but the closest resemblance for the attitude, the spirit of its expression and the muscular development of the body are Etruscan bronzes: the Veiovis in Viterbo [8] and to a lesser extent the statuette of Veiovis in Munich [9]. The superlative casting of this statuette, notwithstanding the problems of a solid cast which complicates the cooling process, its particular finish and patina are characteristic of Etruscan casting of the 3rd and 2nd centuries B.C. as is also the brilliant patchwork. Possibly a coincidence, the rectangular patch on his left buttock (of a very different colour from the rest) is repeated on the Viterbo Zeus Veiovis [10] in the form of a round patch in the same place, but we do not know its hue.

In conclusion, our statuette, which A.-M. Nielsen [11] includes among a group she calls Alexandroids, is an example of what W. Wohlmayr calls an Etruscan hybrid, a conflation of Alexander-Zeus-Veiovis which he names here a Dioskouros. Though surely a votive, for us his identity remains uncertain.

6op. cit., p. 66 (a German word which we do not know exactly how to translate to transmit the author's real thoughts).

7 For we can see no sign or traces of a break indicative of a missing attachment.