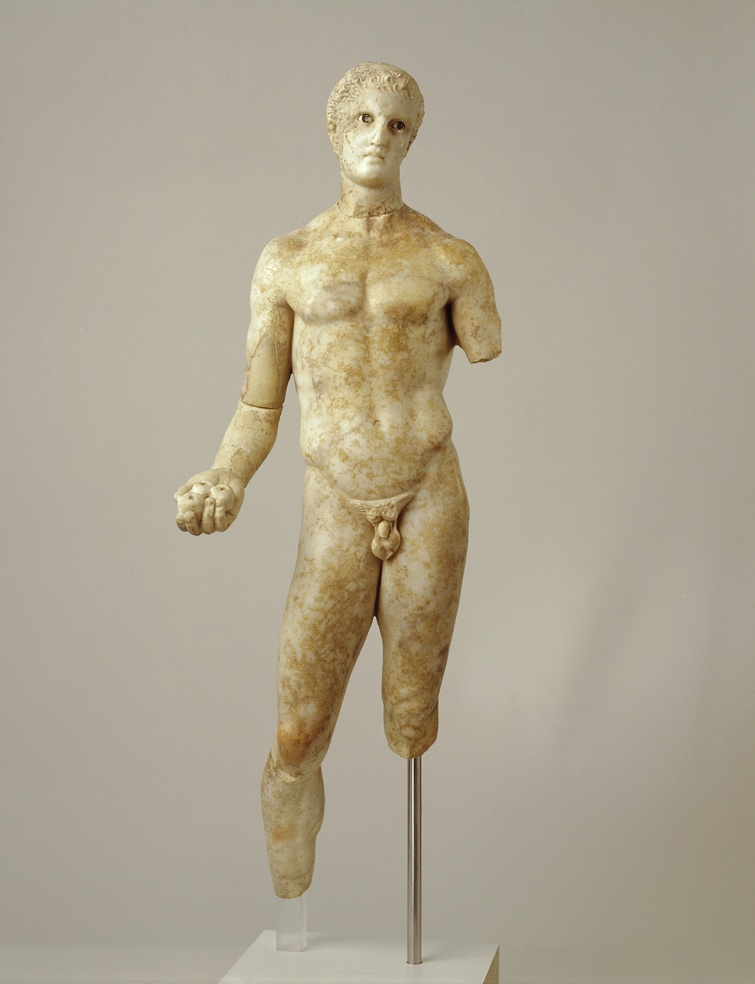 Made of very fine tight-grained marble veined in places. Eyes inlaid in white alabaster, the tear duct indicated and the outer circle of the iris of black glass, apparently at one with remains of fragments of the iris of an undefinable colour, very pale greyish green with slight yellowish hue. The penis made separately and inserted.

Condition: on the front, the surface is a mottled white to golden brown resulting from a modern cleaning of the limestone deposits on what was originally a finely polished surface. The back, less well finished, with traces of limestone deposits. The head, carefully worked in front and left rough on the back, also incrusted. The ridge of the nose burnished down in antiquity. The upper left buttock with remains of a lead inset attachment, the lower part cut down and a chunk broken off. Repaired in Roman times: the head at the neck, the left leg, the right leg and right forearm with hand, the latter [1] a Roman replacement attached with iron rods which, having rusted, split the marble and had to be drilled out in the modern restoration.

The tip of the penis broken and missing, a chip to the lowerleft testicle.

The underside of the replacement forearm and hand with limestone deposits, the index and the thumb chipped. A chip missing on the front and at the back left of the neck at the join, below the front of the right knee and behind the left knee cracks, and three pieces broken off and reattached.

A representation of a youthful Herakles, he belongs stylistically to the Hellenized east where the image of Alexander the Great, who claimed descent from the hero through his father, exercised an overwhelming and durable influence.

This marble poses problems with respect to its attribution, in part because of its present state. The new right arm and the right leg had been reattached in antiquity. The right leg is original, the right forearm with the hand holding the apples of the Hesperides is a Roman repair as indicated by the workmanship of the fingers and what we see as a different marble.

The head was not reattached in antiquity and must have broken off after the Roman repair. It has a slightly different patina but we feel sure that it belonged to the body originally [2]. However, L. Davydova [3] who had full leisure to examine the marble when on view at the Hermitage considers that it comes from a different statue.

It has been suggested [4] that the head is unquestionably from an Alexandrine workshop and represents a juvenile Ptolemaic prince. If this is not so, were he an idealized Hellenistic ruler he would have longer hair and a parallel enabling an identification should come to mind. Thus, he may be a statue of Herakles in keeping with his stance, short curly hair and diadem. Since the right forearm with its hand is a Roman repair, its original position [5] is uncertain. He may not have held apples but still have been Herakles.

The pose would be suitable for a variety of figures, whether a god such as Eros, a hero, a ruler or an athlete.

The unworked back of the head and the less well polished back of the torso, with a large lead insert in the upper left buttock, might suggest that he was intended for a niche. Possibly attached to our hero's left buttock was the tree of the Hesperides which would have hidden part of his back and be an added explanation for its less well finished surface.

Certain observations and comparisons come to mind. The head has certain features fitting for portraits of late Hellenistic rulers and the elongated body is appropriate for the late Hellenistic style. A very good analogy is the hero, the youthful Herakles [6] from Syracuse-Achradina, a marble statue of the late 2nd century B.C. E. Langlotz states that it still is on its original plinth and calls it a cult image, but adds that it does not seem to be a work from Magna Graecia. It belongs to a group of numerous small images of gods from the Hellenistic east such as were found in Priene and elsewhere, and there is a statuette in Smyrna [7] that does not correspond exactly but is similar in many details. He describes the Achradina statue as Lysippan with its small head, elongated proportions and build, harking back to a prototype of the end of the 4th century. However, the construction of the torso is too dry for the period and points towards the end of the 2nd century B.C. We note a strong similarity with the nape and the way the hair is sculpted at the back, though different in style, as well as the lines of the shoulders, the upper arms, and the marked linear edge to denote the pubes.

A Graeco-Roman statue [8] in the United States, said to have been found in the Benevento, is an example for the general type of Herakles with a small head. C. Vermeule makes him into a Hellenistic diademed king of the 2nd century B.C. in the guise of Herakles; but in our opinion, he is only a representation of
the hero.

Our Herakles, standing relaxed, looks out with a detached gaze and fits W. Fuchs' [9] assessment for the period, when he says that around the year 130 there are works that are restful and calm thus giving the impression of being classical when in fact they are classicistic. For as S. Gisel-Pfankuch says "he is worked in the classical style without having the spontaneity of an original".

1 Though difficult to judge visually we believe that the right forearm and hand are Roman replacements for they seem of different workmanship and marble. Strongly in favour of this assessment is that the join above the elbow has been smoothed down on the stump of the original upper arm and is smooth on the repair. Whereas the break at the wrist is a natural uneven one indicating, though also mended in ancient times with an iron rod, that it was a second restoration following new damage after the first repair. A piece of marble on the upper arm at the repair join and several at the wrist with one on the palm of the hand reattached in the modern restoration, with the addition of two pieces in plastic - a large pyramidal section on the original upper front forearm and a smaller patch at the wrist.

2 The whole statue was slightly cleaned, brilliantly restored and mounted by Karl Faltermeier, Chief Restorer of the Antikenmuseum & Sammlung Ludwig, Basel. He confirmed our impression and assured us that in his opinion the head was not a repair: for the break, join and the marble indicated that it was the original.

4 Guy Weill Goudchaux in a letter dated 10 January 1995. L. Davidova (see above) says that royal portraits of Ptolemaic families typically have inlaid eyes and that the ribbons were signs of royal power.

5 Karl Faltermeier informed us that the breaks above the elbow had been reworked to enable the matching of the new forearm, thus destroying any evidence on the upper arm that would give an indication in this respect.

7 See above footnote 6 where E. Langlotz gives the reference to Wiegand-Schrader, Priene (Berlin, 1904), p. 366 ff. for those found in Priene and elsewhere. Unfortunately, the author has not been able to consult this work or find reproductions of any of the statues.