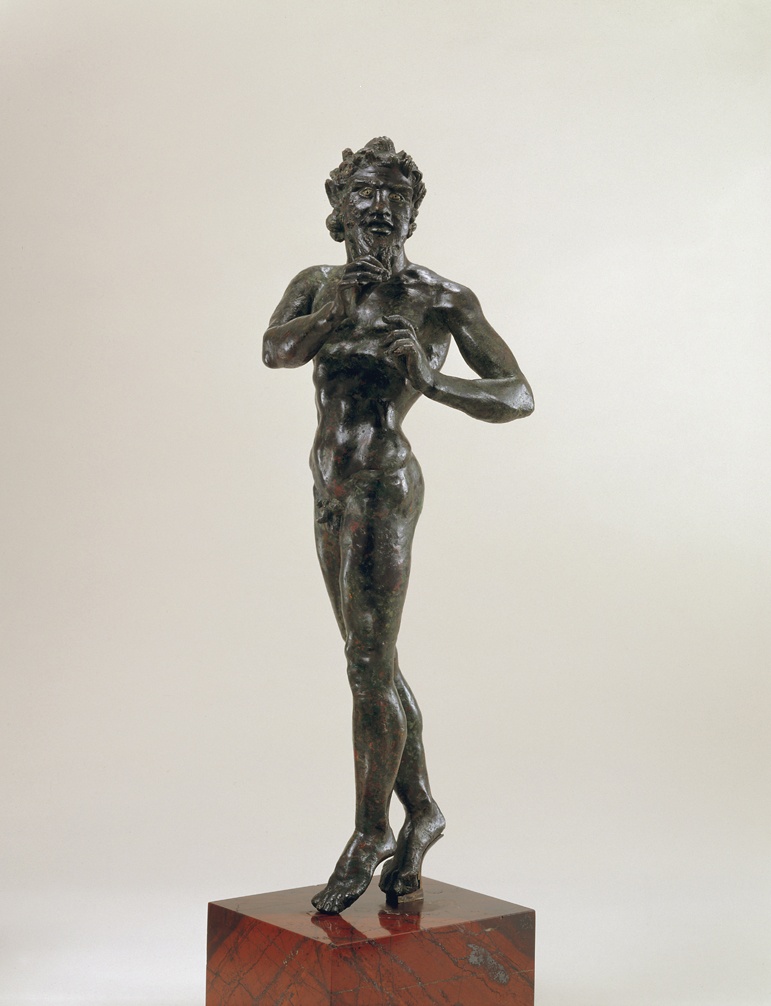 Solid-cast by the lost wax method, carefully worked in the cold and burnished. The musical instrument made separately, now missing. Inlaid eyes of bone or ivory, the pupils missing.

Condition: patina green to black with patches of smooth red cuprite and patches of brightish green. A small section of brownish metal on the left shin. When found, the whole statuette was thickly incrusted with cuprite and atacamite as is wont with bronzes buried in a desert context. Since then cleaned [2], at the time the right arm strengthened, possibly even reattached below the shoulder.

Two locks of hair broken, ends of some others chipped or abraded as is the point of the right ear.

Much of the original sharpness of the chiselling somewhat dulled by the removal of the incrustation. The surface now fairly smooth with the odd nick and with a few large pin holes, casting bubbles.

The back left side of the right heel and the tangs on the front of both feet missing. A modern hole drilled under the left foot from a previous mounting.

This satyr is a lone survivor and unfortunately we can find no close parallels. Sensitively modelled and harmoniously executed, he appears as though turning axially on the tips of his toes. He is dancing to his music as he plays a wind instrument, now lost. It has been suggested [3] that he is an utricularius or bagpipe player, which would fit his whole posture and be suited to the position of his hands for fingering the holes on a bagpipe. Annie Bélis [4] has confirmed that his attitude is indeed more indicative of a bagpiper: position of the hands, left elbow raised as though pressing on the bag of the instrument, which given our provenance and date would be in keeping with the Alexandrians' passion for wind instruments. However, she adds, that his face does not seem marked by the effort of blowing on the pipes, thus a single-reeded aulos or a double aulos is more likely, though any of the foregoing hypotheses are possible.

Though he has been dated anywhere in the 4th to the 1st century B.C., on stylistic grounds and by comparison with distant analogies we have placed him in the early 2nd century. Surely the work of an Alexandrian artist.

A popular subject in Hellenistic and Roman times. For example, such figures appear on Roman marble candelabrum bases and we recently saw one dating to the third quarter of the 1st century B.C. in the Archaeological Museum in Venice [5]. Its three sides are decorated with a maenad and two satyrs. One of the latter is dancing, aulos in hands and with feet in the same position as on our statue, though the right is forward and the left back.

For a somewhat similar stance with respect to the position of the torso, the arms, the turn of the head, and also playing an aulos but with the right foot only slightly raised and the left flat on the ground, there is the Roman bronze statuette of a satyr from Villa Pisones in Herculaneum [6]. The various Hellenistic satyrs from Asia Minor [7] are of a different style and really bear no rapport. It would appear that there is a similar statuette in the Luxor Museum [8] for which unfortunately the author has no data [9]. Though little comparable material has been found in Egypt there is the very late Hellenistic group in the Louvre [10] of Dionysos, two maenads and an aulos-playing satyr from Lower Egypt, an interesting ensemble though not of very good quality and
rather provincial.

His vivid style is in marked contrast to the later typically classicizing satyrs found at Pompeii, Herculaneum and elsewhere in Italy.

1 Father of George Ortiz and understandingly acquired at the latter's request.

2 First undertaken when in the hands of the dealer Amin Khawam, Cairo, during the early years of this century before the job was continued or redone in Paris in 1920/21 by the Maison André.

4 Information kindly proffered on the basis of a photocopy of the satyr in May 1994 following the author's letter with Stevenson's suggestion and asking for help.

8 Unpublished. The author was kindly informed of the existence of this related bronze statuette by K. Parlasca in a letter dated 28 October 1988. He himself has not seen this statuette nor a reproduction of it.

9 In the Royal Academy edition of this catalogue, we had mentioned a similar statuette in Athens from Tanis, reference kindly provided by K. Parlasca (Parlasca, K.: La Mosaïque gréco-romaine II, Colloque Vienne 1971 <Paris, 1975>, p. 365 n. 20). In the meantime the author has seen a reproduction and does not concur, save that the figure is a dancing satyr (but with head thrown back and arms raised).