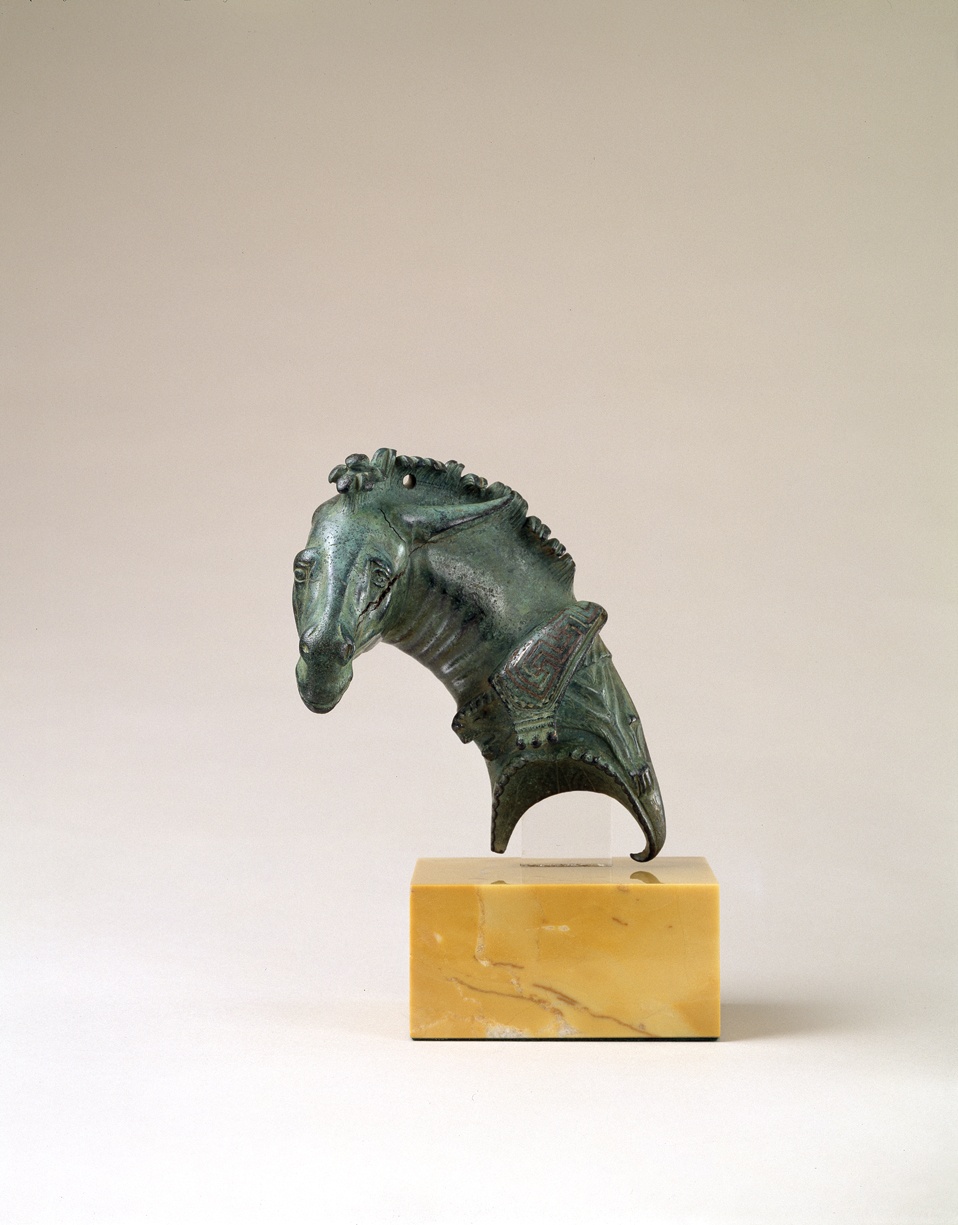 Cast by the lost wax process, thoroughly worked in the cold, a swastika-meander on the harness inlaid with silver.

Condition: patina light green, blackish where rubbed. A large and deep crack along the left side of the head below the eye and a thin one in front of the ear. Right eye and muzzle worn. Part of the silver inlay missing.

Converted into a weight by making a hole through the mane above the ears to enable suspension and filling with lead which was covered by a thin sheet of bronze, edges frayed with parts missing.

At bottom of neck one point bent inwards, the other broken off.

The mule head decorated the upper end of a fulcrum, the curved head board of a reclining couch (kline), on its front left end. On the lower end there would have been a medallion with a bust or head almost in the round. This example belongs to a type that appeared in the first half of the 2nd century B.C. and carried on through the first half of the 1st century A.D. They have been the subject of a full study [1] that takes into account their evolution, that classifies them in groups determined by shapes and details their different characteristics. The principal criteria are the frames, which unfortunately is lacking for this example.

Apparently the first representations of beds with end-rests appear painted on Greek vases of the 6th century B.C. and they come in use more and more as a piece of dining-room or triclinium furniture. A new impetus is brought to this model after Alexander's expeditions and the ensuing influence of Achaemenid practice; from the 3rd century B.C. onwards the
type becomes widespread. W. Lamb [2] suggests that it originated in Asia Minor.

The present example shows the mule protome with a panther skin and a saddle-cloth ornamented with a silver-inlaid swastika design and ending with three tassels. One of the panther's paws hangs down the neck of the protome, whereas the animal's head - open jawed, with eye and ear carefully indicated - slightly protrudes sleepily (he is dead) over the neckline. Little tufts of hair are engraved over the skin.

The mule head itself has most expressive eyes, rather sad and sensitive, and the muscles of his head are realistically featured. The front of the mane over the forehead forms a beautiful protuberance of five tufts as though a plant in bloom. The mane is composed of short tufts of hair as though combed that lean to both sides, most of them towards the front.

We do not discuss any comparisons since this has been carefully considered by S. Faust. She mentions the mule protomes from the Gulf of Juan shipwreck as an indication for the date and lists this applique under her group III. We have followed her chronology though it is possible, we feel, that the present example could be placed slightly higher in the second half of the 2nd century B.C.

1 Faust, S.: Fulcra. We have borrowed heavily for this entry from her work.