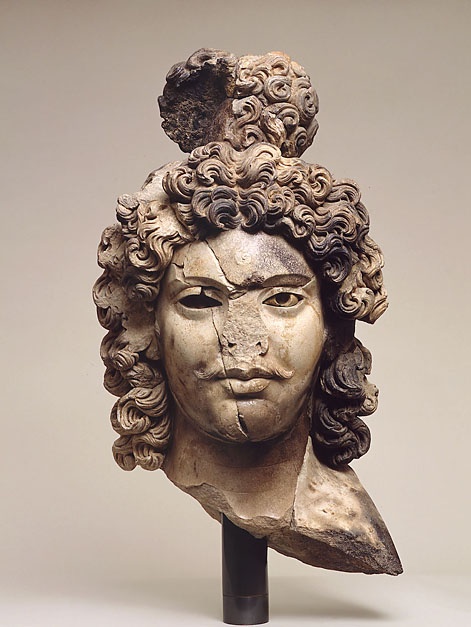 Sculpted of white marble, the topknot made separately, a large roundish hollow section on top of the head for holding it in place. The hair formerly stuccoed and gilt, the odd speck of gold still visible. The eyes made separately of marble with inlaid irises.

Condition: traces of fire on surface, nose and other parts broken and missing. The face - reassembled of two large pieces; the forehead in three sections: two parts attached to hair, one a sliver - cracked with wedge-like bits missing, the right upper eyelid chipped and the left one with a long flake. Missing: right eye, the irises, and the inlay for both pupils, possibly rubies. Right ear lobe damaged, the cheek section below it missing, the neck one large piece with the left shoulder and a smaller piece at the join with the face; the hair in eight large fragments and three smaller ones, a lock of hair above left ear lobe and wedge-like bits missing, flaked here and there. The topknot, with a large chip on top and a flake at join, one quarter missing and broken in three.

The head has been slightly cleaned and the black stains induced by fire over the forehead attenuated in the process.

Siddhartha Gautama, a historical figure, was born a Kshatriya prince in the Nepalese Terai on the border with India c. 563 B.C. [1] . He was the son of king Suddhodana and queen Maya of the Sakyas in the kingdom of Magadha and belonged to the clan of Gautama [2]. "He renounced kingdom, wife and child to become an ascetic". He wandered, meditated, preached and achieved enlightenment. He became the first Buddha, founder of Buddhism in North India.

In this region at the crossroads of Asia, the 6th century B.C. was a period of intellectual and spiritual ferment, of development in commerce and politics.

Our prince, the future Bodhisattva, was at first reacting against the suffering, injustice and poverty he discovered around him, and to some extent against Brahmanism. Considering that suffering results from desire, his first quest was for moral discipline leading to nirvana, a "transcendent state in which there is neither suffering, desire nor sense of self (atman), with release from the effects of karma (extinction of illusions)". However, far nobler than this individual pursuit was the path he took, travelling and preaching to relieve the sufferings of humanity.

This admirable work of art is unique. It is within our present knowledge incomparable and thus very difficult to place.

The region that produced him was a conflation of influences from the Mediterranean, Persia, India and China, and fulfilled a role of absorption and diffusion. Unfortunately all Gandharan chronology is very relative. It is to be remembered that the Kushans (known as the Yueh-chi by the Chinese), a nomadic Indo-Scythian race, had no monumental tradition in art. Their kings (c. A.D. 40-240) adopted Buddhism and having secured power in the realm realized the propaganda value of imagery, both political and religious. They employed to a certain extent the picture language of the Hellenic world borrowing either from Parthia or Rome directly, their coinage with Greek inscriptions and names reveals the close contacts between India and this world. Various of their kings carried on relations with Rome, thus Kujula Kadphises with Augustus. Embassies visited Rome several times during the reign of Hadrian (A.D. 117-138) who had adopted conciliatory measures towards the eastern powers: "the Bactrian kings sent him envoys as suppliants for his friendship" [3]. A.C. Soper [4] suggests "that one such mission secured at the capital the services of a master sculptor, who was escorted back to Peshawar to lend properly imperial note to the rapidly expanding art of Gandhara"; there is no known evidence to prove such a claim, but adds, its plausibility might be inferred from the very character of Gandharan sculpture. We have noted a high relief in Peshawar [5] where larger than the Buddha is Bodhisattva, his head and richness of hair appear to bear resemblance with our prince. It is according to H. Ingholt an idealized legendary representation. Another Roman source tells that the Indians [6], Bactrians and Hyrcanians sent envoys to Antoninus (A.D. 136-161); during this period King Kanishka and his son Vasishka may have continued contacts with Rome.

This portrait has both the ushnisha (topknot) and the urna (tuft of hair or hairy mole on centre of forehead still indicated) [7]. However, his youth and fleshy face with its sensual mouth suggest that he is still Prince Siddhartha before he abandons all on his quest. This portrait would also be exceptional as representing the Prince before he became the Buddha, the richness of his hair having taken the place of jewellery. His fleshiness and hair vaguely call to mind portraits of the idealized Antinous, but here we are in a different world.

The head is made of beautiful marble whereas Gandharan sculpture is usually of a soft bluish-grey schist. A foreigner may have sculpted it though in all likelihood an Indian was its maker in keeping with its spirit, ethos and soul for the inspiration is Gandharan.

Prince Siddhartha is the only Bodhisattva portrayed in Gandharan sculpture and might this not be an expression of him just before he becomes Bodhisattva in keeping with what J.M. Rosenfield says: "The faces of the Gandharan Bodhisattva types are invariably idealized masks related, like the Buddha countenance, to an Apollonian prototype, so that, like the later Roman portraits of divine emperors, they could be said to represent the personage in a kind of apotheosis, transfigured and deified in the form of eternal youth." [8]

1 This date places his death around 480 B.C. Sri Lankan chronicles variously date his death Mahaparinirvana between the second half of the 6th century and the first half of the 4th, thus the date of his birth would have to change to correspond. There is at present no consensus.

2 The name is applied to him by southern Buddhists; northern Buddhists usually call him Sakyamuni (the Sage of the Sakyas), the latter part of which means "wise" or "saint" in Sanskrit.

6 For example, tradition has it that Saint (Doubting) Thomas travelled from Jerusalem to India, where he designed a palace for the Parthian King Gondophares.

7 "The former almost certainly deriving from the chignon in which Prince Siddhartha, the future Buddha, wore his hair under his turban, were both personal to the historical Buddha and thereafter to all Buddhas" (Errington, E., Cribb, J., Claringbull, M. (eds.): The Crossroads of Asia. Transformation in Image and Symbol <Cambridge, 1992>, pp. 43-44).