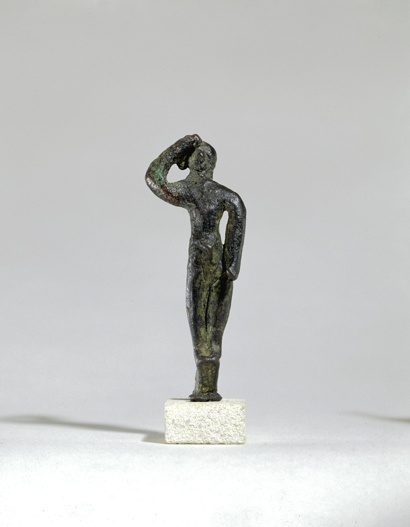 Solid-cast by the lost wax process, the feet resting on a vertical rectangular element which would have been used as the entry channel, a small outcropping at its lower end from the pouring. Some cold-working, as on the separating line between the buttocks and the legs, front and back.

Ascribed by Verlinden to the Classical Style and dated to the second half of the Neo-Palatial period. She finds the piece unusual, since it partakes of earlier classical characteristics. One may compare its volume with the statuette cat. no. 51; and a statuette in Berlin [2] for the position of the hands, the modelling of the arms and torso and the face (to some degree for the frontal view but certainly not for the profile); moreover, the Berlin statuette is far more static.