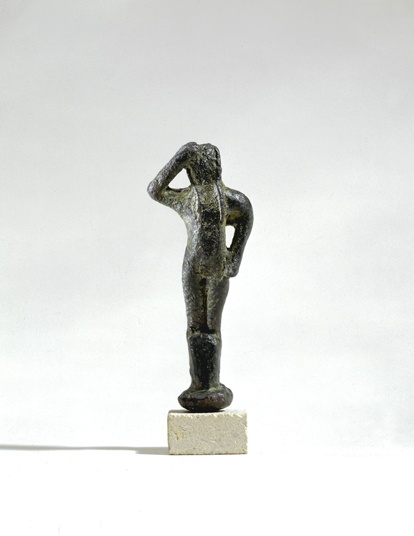 Solid-cast by the lost wax process, the legs ending in a tang surmounting a blob which were the canal and funnel for the
molten metal.

Placed by Verlinden in the Neo-Palatial Intermediate Classical period. Her remark that the taut, arched stance of the male statuettes is truly the artistic canon of Minoan art of the highest period, is notable in view of the present statuette's conformity to it, despite belonging to a later phase.

A fine sculpture executed in a most satisfying impressionistic cast that exemplifies the spontaneous dynamism of Minoan art in its Classical phase, as the figure surges forward from the ankles, curving up to the head in natural tension, conscious of its votive mission.

In the English catalogue for the Royal Academy of Arts, London, 20 January - 6 April 1994, the illustrations for 51 and 52 were inverted with 52 on the lower left and 51 on the lower right of the plate.