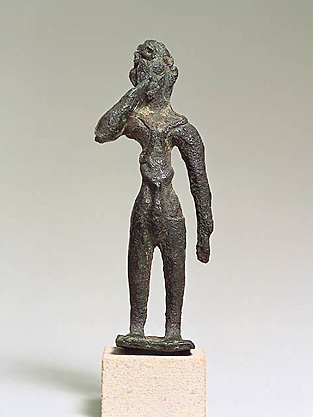 Solid-cast by the lost wax process, the tang under the base is from the entry channel for the molten metal. A spatula or similar implement was used on the wax model, and the left hand as well as the end of the tang pinched after casting.

Condition: patina varied, the colour of anthracite with a brown hue veering in places to dark green or light green, with traces of the mould here and there; casting imperfections visible on the strand of hair as it falls from the right shoulder, on the surface of the face, upper chest and right arm which are somewhat porous.

Ascribed to the Neo-Palatial period by Verlinden and categorized as Style B from the group assembled around the Gournia statuette [1], dated to Late Minoan Ib, which is the archaeological context of its find. However, Verlinden sees the Gournia figure as unfinished, clumsy, and stiff, though the muscles are not taut. Tension is lacking and the back is no longer arched.

Verlinden's grouping and the sharing of several important elements may be accepted. But there seem to be considerable differences which are mainly qualitative and might indicate that the statuette is probably the earliest of the group, certainly the finest and closer to the "Classical Style" of which it retains certain characteristics. For instance, the relation between shoulders, waist and hips; the palm of the left hand facing back; also the features of the face being more distinctive. Verlinden also notes that the figures of group B are a deformation of the "Classical Style".

Most important, unlike the rest of the group, the statuette maintains a tension, indicated by the line running from under the girdle over the hip down to the ankle, the beautiful arching of the back from the middle strand of hair down to the buttocks, and the continuous flowing line from the shoulder down to the ankle. Further, the codpiece, though of the same type as the Gournia figure's, is infinitely more refined with its moulded bottle shape; it is held up by the belt. There is a delicacy in the way two of the three strands of hair flowing from three large curls on the forehead fall behind the ears, over the shoulders, in a lovely curve ending, one at the waist and one slightly above.

Does this mean that the statuette is only earlier and therefore more refined? Is it possibly the prototype for the group or is it simply the product of a better artist working for a palace or villa aristocrat?

1 Herakleion, Archaeological Museum 612; from Gournia, the small palace of the local governor built during LM I and destroyed at the end of the same period: Verlinden, cat. no. 101.