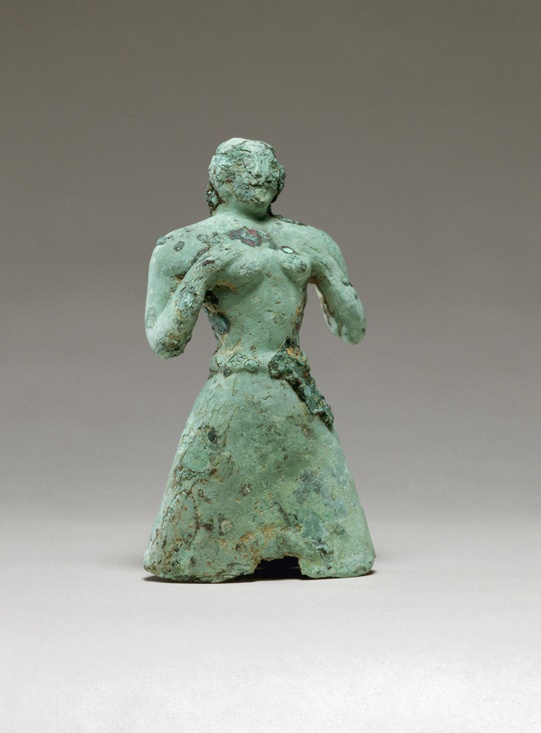 Solid-cast by the lost wax process, the skirt hollow.

Condition: patina a light green to which adhere patches of hardened mud and traces of yellowish rust.

A large casting fault on the lower right side and back of her skirt and a small one on the top left front of her skirt, both repaired by annealing with the addition of metal.

Corroded on the face and on the upper right of the skirt, the right shoulder, arm and breast deeply fissured and split with smaller fissures down the right at the back of her head and neck, probably produced by the dripping of water and the mud in the alleged find-spot, the Tsoutsouros cave.

This female votary (cat. no. 56) is the one on the right side of the plate.

The only female of a special group which Verlinden builds around the Gournia statuette and which she considers the earliest figure from the Tsoutsouros cave. The rounded forms and originally smooth surface hark back to the Classical Style.

Verlinden's dating seems plausible; though the lack of resemblance to others in the group and the lack of comparisons is disconcerting.

A very individual statuette in her own right; we concur with Verlinden that the artistic care with which she is made reveals her to be the result of a typological and stylistic transformation, the product of an internal evolution in Minoan art.

Notwithstanding the damage of time, we can still sense the well-modelled face and appreciate the beauty of the bosom framed by two strands of hair ending at her skirt and the voluptuous braid of hair that cascades down her back. Her left profile is particularly beautiful and enables one to realize how she once was.

1 Style B according to C. Verlinden

N.B. Errata : unfortunately the illustrations for statuettes 56 and 57 were inverted in the catalogue/handbook in Russian and English for the State Hermitage Museum, St. Petersburg, 11 February -11 April 1993 and the State Pushkin Museum of Fine Arts, Moscow, 6 May - 27 June 1993: opposite 56 appeared the illustration corresponding to entry 57 and vice versa.

In the English catalogue for the Royal Academy of Arts, London, 20 January - 6 April 1994, the plate was the same one as here but without the indication that the first of the two figures, the one on the left, corresponds to 57.