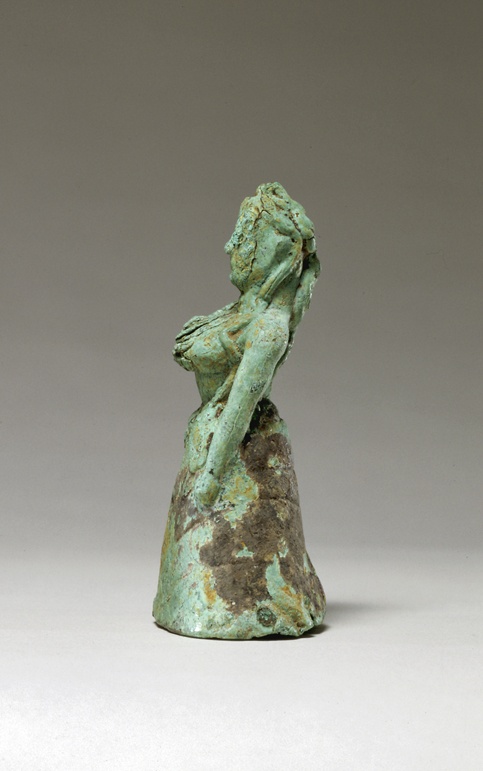 Solid-cast by the lost wax process, the skirt hollow.

Condition: patina a light green - a transformation due to chlorides - to which adhere patches of hardened mud; a spot of reddish cuprite above the right breast. A chip missing from the lower front of the skirt, a crack and three holes on the left back where the metal of the skirt appears to be thinnest. Parts of the smooth surface rough and with casting edges unremoved. The head and face with small fissures, weathered and damaged. Two small protuberances on the lower back of the hair-bun and one on the left shoulder-blade, the result of oxidization or possibly the unremoved remains of air vents (for the casting).

Found with cat. no. 56 and also the only female of her group which Verlinden ascribes to the early Post-Palatial period, Late Minoan IIIa. She bears little resemblance to others in the category in which she has been placed.

In addition, it is notable that she is of almost identical size to cat. no. 56, also a female naked from the waist up, wearing a skirt and with similar patina and weathering (these last more often than not a consequence of the environment: the soil's composition, the electrolytic currents and the water).

Because of the differences in volume and style we are inclined to accept Verlinden's dating. The differences could be due to different hands working contemporaneously in different styles; though, of course, the Tsoutsouros cave was in use over a very long period.