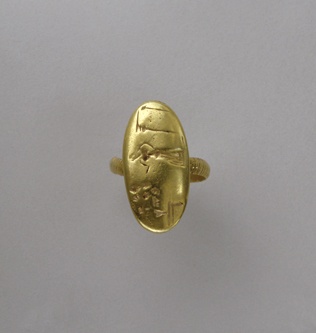 The bezel cast in gold, touched up in the cold. The band hammered, curved, annealed to the bezel and then engraved with horizontal lines humped in the middle [1].

Condition: the surface and the edges of the bezel worn.

The scene represents a Minoan priestess or attendant [2] of the cult, right arm bent at the elbow, forearm extended toward a shrine with tree, the tree with rich foliage [3]; on the right, two columns surmounted by a roof may perhaps indicate the goddess' sanctuary. The significance of the ritual depicted is not certain. A gold ring in Oxford [4] is comparable for general shape and lined bezel, as well as for a similar type of representation with a female figure, building and trees.

A precise date is difficult; for though, on the one hand, a certain plainness in the figure is indicative of an early date, her static quality is more in keeping with the later conception of the Mycenaeans.

1 The hump is due to the line having been cut from the outside edges of the band towards the centre. This decorative element finds an almost identical parallel in the appearance of the horns on the climbing wild goats of the steatite rhyton from Zakro: Herakleion, Archaeological Museum 2764, dated LM I a-b: Sakellarakis, J.A.: Herakleion Museum, Illustrated Guide (Athens, 1990), p. 76.