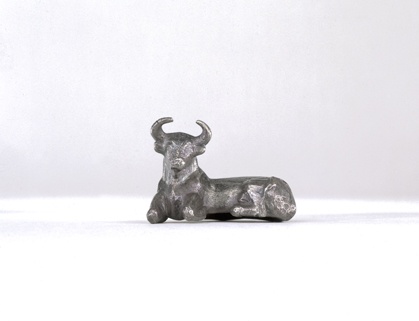 Solid-cast by the lost wax process then worked over in the cold by hammering, filing and punching.

Condition: excellent, with a crack near the tip of the right horn.

This is the only example of its kind known so far. The closest parallels in feeling and style are the bulls on the two gold cups from Vapheio [1], though these represent bulls in action, being trapped in a net or drawing a plough.

Notwithstanding the difficulty of comparing animals in different positions - standing and in movement as against reclining and static, and in low relief as against in the round - a similar naturalism associated with superb workmanship link them in the same tradition.

For the pose, there are two reclining goats in bronze from Hagia Triada (and ascribed to exactly the same period) [2], though not of the same artistic quality, as well as the wild goats reclining on the roof of the sanctuary on a steatite rhyton from Zakro [3], dated Late Minoan I a-b.

From near Knossos, a sardonyx seal, though considerably later in date, represents a reclining bull about to rise and the back view of the head and neck of another [4], that bear resemblance with the head, horns, etc. of our example.

The bull was sacred in character and central to the Minoans for acrobatic and other sporting and ritual festivities. Our bull is certainly a votive [5] and surely produced by a palace workshop, possibly Knossos [6].

The delicacy of the surface, somewhat unsmooth and imprecise, shimmers with naturalism and conveys the underlying strength and inherent tension which reveals the spontaneous vitality of artistic creativity at this, the highest moment of Minoan civilization [6].

6 Also in all probability from a palace workshop in Knossos there is a most unusual statuette of very fine quality representing a figure of high rank found at Katsaba in the neighbourhood of Knossos (Herakleion, Museum 1829). It is of comparable date, ascribed by C. Verlinden, Les statuettes anthropomorphes crétoises en bronze et en plomb du IIIe millénaire au VIIe siècle av. J.C. Archaeologia Transatlantica IV (Providence/Louvain-la-Neuve, 1984) no. 93, p. 125, to the same hand as her cat. no. 54, reputedly from Tylissos, which is also the alleged find-spot of our reclining bull. The similar plastic quality and most especially surface details on both the body of the bull and the Katsaba statuette, leave one thinking that the same mind might have guided the hand of the artist. There is a kinship between the face of the silver bull and those on the Vapheio gold cups and some steatite rhytons (see footnote 3), thus indicating a connection between them and/or pointing to a central palatial workshop working in more than one medium. The stature of the artist responsible for some of these creations would have predisposed him to try his hand at different forms of expression and in different materials, which might explain these unusual but exceptionally fine examples. Why could there not have been, as in the Italian Renaissance, an all-round artist in the Minoan world at this time?