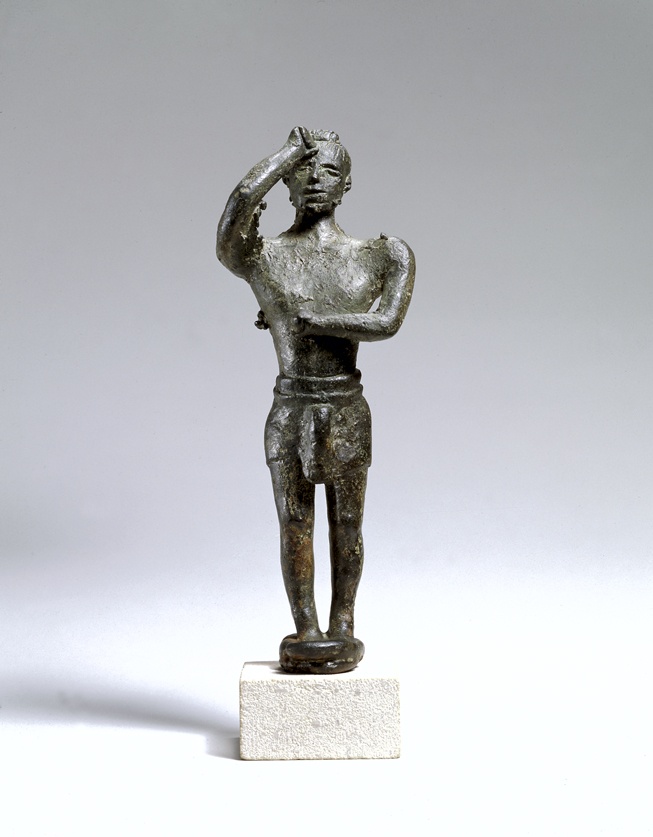 Condition: patina a greyish green with incrusted traces of reddish brown earth. The upper half of the body retains casting burrs and barbs, one or two of them possibly the remains of vents, visible on the middle of the back and right side, on the left shoulder, but mainly on the left side and back of head and on the inside of the right upper arm where, obviously, the mould must have been defective. The feet somewhat melt into the blob of which they are a part and which must have served as the channel entry.

Verlinden places this exceptional statuette in her Post-Palatial period under "unusual examples", for it embodies so many different characteristics.

Several of the comparisons she gives - mainly for the shoulders [1], the hair-bun on the crown and the engraving of the locks [2] - are slight. Chronologically, they cover a period from Paleo-Palatial to the advanced Post-Palatial. She finds the statuette's style slack, undynamic and without rigour; the appearance non-energetic and soft. This assessment applies to the lower half of the body; but certainly not to the top. And, if the figure presents a certain harmonious whole, it is due to its having been fashioned by one hand.

We see a presence in the face, the broad shoulders, the gestures of the arms and the curve going from just above the buttocks to the back of the head.

The representation of a strong personality, almost as though we were confronted with a real person, an attempt at portraiture.

The heavy buttocks and short legs are plastically poor, perhaps the consequence of an attempt at realism. Perhaps what mattered more to the artist was the spirit of the figure, dedicating itself to the deity, expressed by the pose of the upper body.

We are uncertain as to whether this difference in appreciation has a bearing on the statuette's date and grouping.