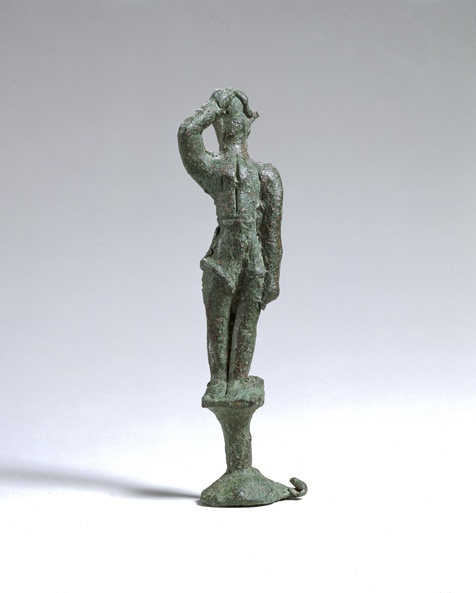 Solid-cast by the lost wax process, a few grooves reworked in the cold.

The feet rest on a rectangular base under which is the channel entry, a pipe-like section, ending in the funnel for pouring, its underneath surface wavy and though combed in different directions, a knob of metal to one side.

There is a curious coincidence in the base funnel, which seems a mound of metal on our statuette, and the bottom part of a figurine from Phourni [1] near the Archanes temenos. We see a similarity in the metal as well as what appears a similarity in the surface texture between the two statuettes [2]. Verlinden agrees that the underneath surfaces of both are very similar and affirms that this is a natural state of the molten metal when it hardens without any human intervention [3], such as combing, chiselling, etc. She adds that the channel mound on the present statuette would normally have been cut off. Might it not be that the Minoan artisans were in general able to gauge correctly the amount of metal needed [4] and that often the channel section of the mould would not fill up. See for example cat. nos. 52 and 62, though they still retain a small knob.

To an enquiry whether a few other exceptions with this part still attached [5] had the same wavy combed surface, Verlinden stated that for various reasons (their being affixed or embedded in modern museum stands, etc.) she had been unable to examine these features.

Verlinden's dating for the figurine which almost certainly comes from Archanes, may be accepted, but the casting similarity to the figurine from Phourni, which is apparently correctly dated from a tomb to the end of the Pre-Palatial period, is perplexing.

2 The writer knows the Phourni figurine only from the poor reproductions in Verlinden's publication.

3 A modern sculptor and a most competent restorer both confirm the fact.

4 This does not explain how with no pressure (in modern casting a very large funnel is filled and the sheer weight ensures that the metal runs through the whole mould) the Minoans usually achieved such well cast statuettes. It would, however, explain why there were so few burrs, avoiding the need to go over the whole bronze in the cold. This results in the figures being so marvellously impressionistic in appearance. However, we do not believe that this is merely an accidental technical coincidence but rather a deliberate choice for unknown reasons. John Boardman suggests that maybe they rejected and melted down dozens of the things before they got one more or less right.

5 E.g., Paris, Louvre Museum BR 4294, Herakleion, Archaeological Museum 1829 and Oxford, Ashmolean Museum AE 619 (a head with neck surmounted by the channel mound - most unusual, signifying that the figure was cast head up).