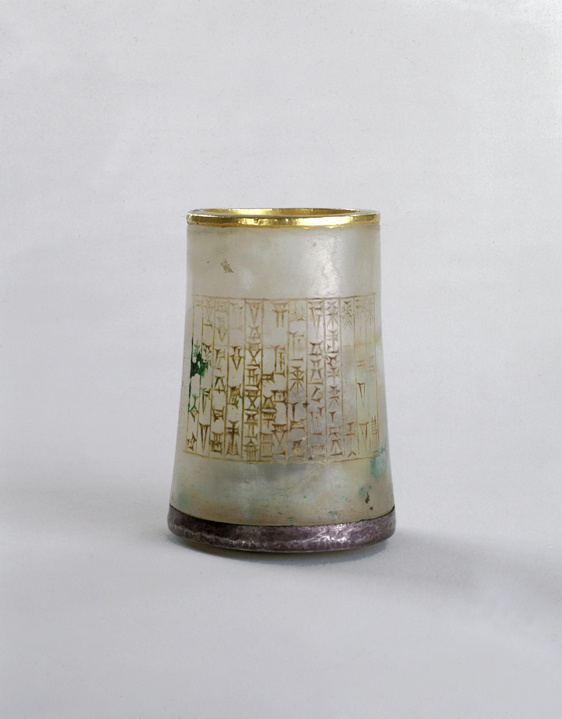 The vessel carved of two pieces of rock crystal and polished; the body of slightly tapering cylindrical form and the underside of the foot made with three concentric stepped levels. The rim of the mouth with a hammered gold lip, the foot circled with a strip of silver (possibly a modern replacement) likewise hammered. On the body an incised inscription within a rectangular frame.

Condition: at the mouth a wedge of rock crystal fissured and the vessel's base once broken, glued together from three pieces. Adhering to the inside of the vessel what appears to be some bronze residue in the shape of a "rocaille", of a green cuprous chloride colour with earth deposits. The surface of the rock crystal slightly weathered with traces of green cuprous chloride deposit on the inscription and in some of the signs, also faint traces of some blackish material that might be bitumen.

A votive jar, the Sumerian cuneiform inscription reads "To Amurru, his lord, for the life of Rim-Sin, King of Larsa, Shep-Sin son of Ipqusha, chief physician, the servant who reverences him, gave (this) stone vase, its lip inset with gold, its base with silver" [3].

The inscription fits nicely with the practice of the time
when officials made offerings of precious objects to the gods for the good health of the ruler in power. This text is unrecorded elsewhere.

There is no indication as to the contents [4] of the vessel, though these would have been in keeping with the occasion, and the receptacle itself made of rock crystal embellished with rims of gold and silver attests the significance of the offering.

Mentioned:
Moorey, P.R.S.: Ancient Mesopotamian Materials and Industries. The Archaeological Evidence (Oxford, 1994), p. 95.
This entry, as it appeared in the Royal Academy catalogue, was based on the description in Sotheby's sale catalogue (5 December 1987) for which all the information was supplied by Prof. W.G. Lambert, since modified thanks to references and additional data communicated to us by Prof. Lambert to whom this writer is greatly indebted. This vessel and its inscription are unique and the reference to the Oriental Institute as probably having a pair is a confusion, as A.1803 is the archive number on a photo of our vessel. The revised entry has been slightly modified thanks to information received from
Dr. Igor Klotchkoff (24 February 1995), Renée Kovacs and Prof. M. Civil (22/30 January 1995).

2 I. Klotchkoff informs us (see above) that "the inscription was cut after 1800 B.C. when Rim-Sin began to write determinative of god before his name." Since the vessel is surely contemporary with the inscription, if this be so, the higher date should be slightly lowered.

In a letter of 3 October 1991, W.G. Lambert writes: "D.R. Frayne, op. cit. p. 305, takes the Sumerian sha'usha in line 8 as the name of the vessel because it is explained sappu in the ancient lexical list Urra = hubullu XI 386. However, this list gives three other Babylonian translations of this Sumerian term in the context: asmarû 'lance' (line 381), makdadu 'scraper' (line 387), and hasinnu 'axe' (line 388), and all four cases equip the Sumerian term sha'usha with the determinative urud 'copper'. Thus the context does not favour any kind of vessel, and the Chicago Assyrian Dictionary, vol. S (1984) p. 166, understands this sappu meaning 'lance'. Also the signs taken by Frayne for the type of stone have in fact no rendering preserved in the lexical source he quotes, though it can be cited that they could be a stone name. Since there is only one determinative in the line, at the beginning, and 'stone', it is best to assume that the remaining signs are the name of this particular type of vessel and their reading must await more evidence."

A propos this note R. Kovacs writes "it is reasonably certain that sha'usha = sappu 'a vase'", and Prof. M. Civil "the two entries sappu A and sappu B in Chicago Assyrian Dictionary, p. 166 should be collapsed in one and there is only one meaning: 'vase'. The references from UET 5 under sappu B all refer to a domestic utensil, not a 'lance'. Furthermore, sappu is nothing but a variant of the better known shappu 'vase'. The stone name is problematic since we would expect zu-babbar (babbar = 'white'), not zu-MI (MI = 'dark, black'); a type of scribal error, or word play, maybe involved."

Pierre Amiet informed us in the letter referred to in footnote 1 that the script was Sumerian, of the time of Hammurabi, a contemporary, victor over Rim-Sin. Amurru was a god, the homonym and patron of Semites that came from the west to Mesopotamia, thus called Amorites. He added that the "worshipper of Larsa" in the Louvre carries a dedication to Amurru and with the three ibexes in bronze (Parrot, A.: Sumer <Paris, 1960>, p. 390 fig. 349-350) must come, as our jar, from the same illicitly dug temple. He believes that the Béhague acquisition is of the same time.

An added indication is the mention in Dussaud, R.: MonPiot 1933, pp. 1-10 that the same dealer offered together to the Louvre: the Béhague rock crystal jar, the two bronze groups now in the Louvre and the bronze ram that went to Canada (information kindly supplied by A. Caubet, 9 June 1994).

4 Though ancient, the bronze residue adhering to the inside is, in the writer's opinion, extraneous. Timothy Potts, in August 1994, said: "It seems that many stone vessels were offered for themselves rather than their contents. Certainly in the case of your vessel, it would have been a precious gift and I doubt that it would have contained anything."