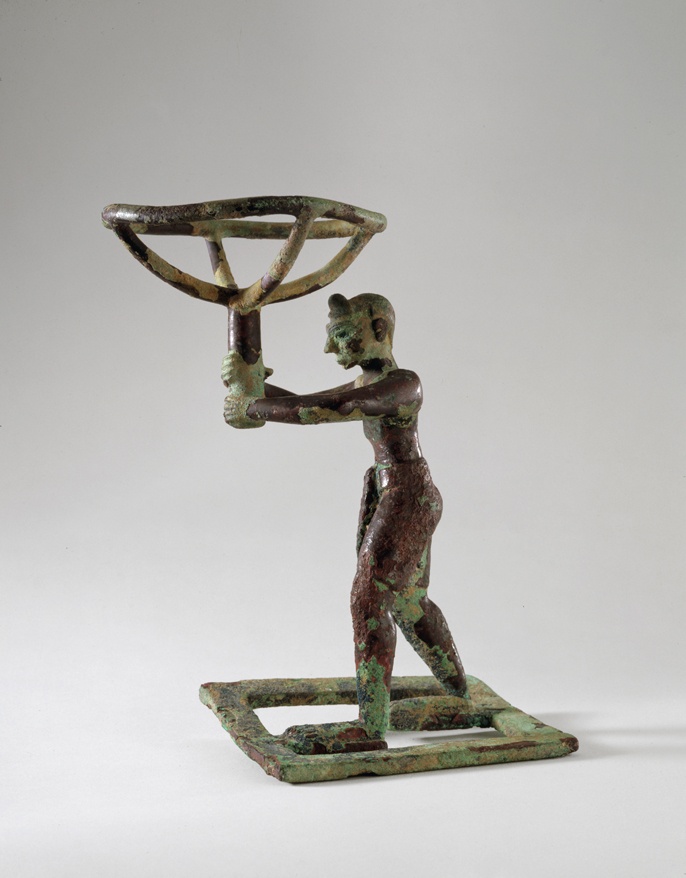 Solid-cast by the lost wax process with some cold-working.

Condition: the figure bent towards the right and the rectangular grating on its right side greatly distorted upwards.

The patina a thick crust, green, azurite and hard reddish-green with deposits of yellowish to brownish earth, mostly flaked and chipped off to reveal a smooth undersurface, a "blurred" colour, dark brownish-red, aggressively abraded in many parts. The lower part of the sash, hanging from the belt, bent back. The circular ring surmounting the four-armed support slightly distorted.

This statue has affinities with a group of arsenical copper figures [1] (all vessel supports) to which have been related the Bull-man (cat. no. 15) and his pair. It may be compared for details such as its ears and the shape of its nose with the nude male statue in New York [2], and though the general almond shape of the eyes bears resemblance, on the New York figure they are solid with a central slit, whereas here they are hollowed out to receive an inlay. However, they are basically dissimilar. Particularly noticeable on the present figure are the high ridges for the eyebrows and a similarly exaggerated accentuation of the collar-bones. He wears a skirtlet held up by a wide belt, a thick sash hanging down in front, and thus differs greatly from all the other figures that are naked. Because of his dress and cap with raised visor, he is ascribed to a slightly later period, though the dating of the other copper figures and the alabaster bull-men varies among scholars between Early Dynastic I and II [3] .

Its style may derive from Southern Mesopotamia or from Southwestern Iran [4]. All these statues appear to belong to a common tradition and served a somewhat similar purpose.

This figure probably fulfilled the function of a temple attendant holding up a bowl of incense, a lamp or some other offering.

4 O.W. Muscarella replied to our query on 5 June 1995 saying that one cannot go beyond this which is "an 'intelligent' guess, nothing more".