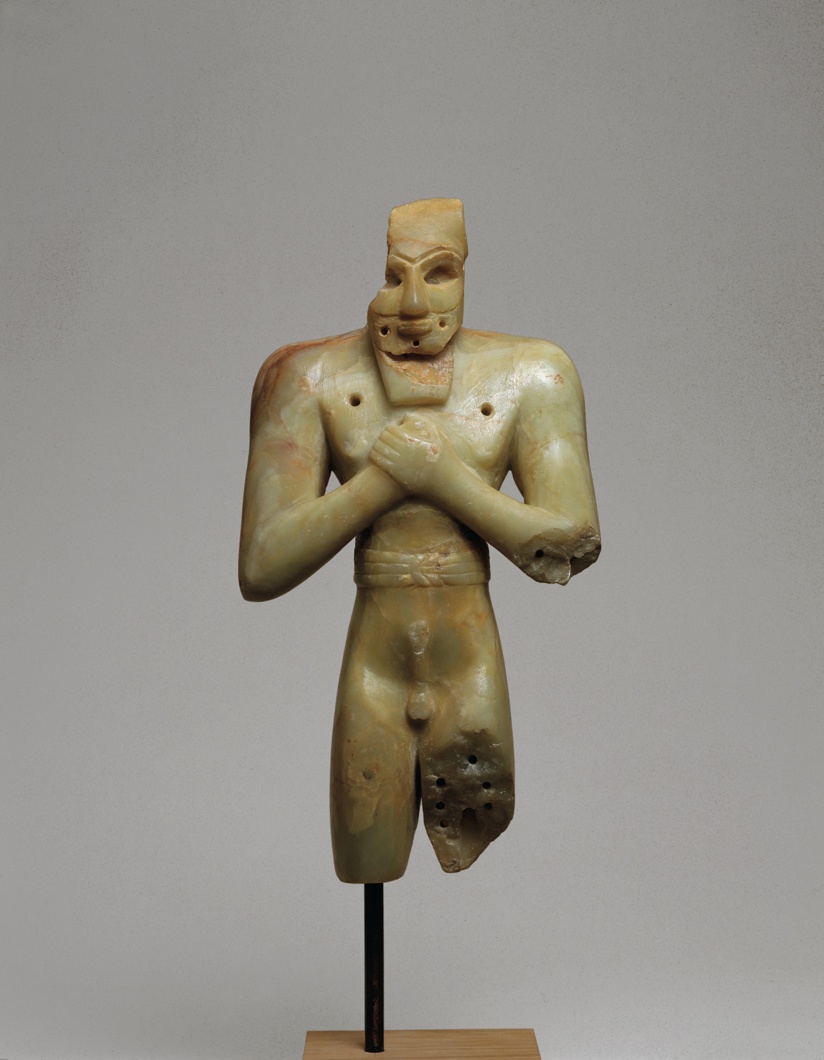 Condition: face reaffixed; bust reaffixed to legs, with a strip filled in below belt at back and with a section filled over stomach between belt knot and clasped hands; right arm reaffixed, two small wedges filled, consolidated with glue here and there. Abrasion to tip of penis and testicles.

Missing: back of head, upper right side of face with half of eye, section of beard, left elbow, inverted V-shaped wedge on lower right side of right leg and a large diagonal section sliced from upper front to end of back of left thigh.

Also missing: the horns for which there remains over half the section of a large, deep round hole for the insert of the left horn, showing that the horns were inset c. 2 cm and thus were probably of lapis lazuli; there is also the remains of a deep round perpendicular hole drilled in the head just behind the insertion emplacement for horns on a slight forward slant; the ears; the inlaid eyes and eyebrows; the hair of the beard that was probably a worked sheet of metal; whatever was affixed to the two holes on the chest; the tail for which there remains the large, deep hole between the buttocks, and the lower legs and hooves that were possibly of silver [1] or copper [2] for which there remains a section of the large hole in the left thigh, c. 3.5 cm long, for affixing the lower leg.

The inlays could have been of shell, lapis lazuli, gold, silver or copper.

The alabaster a lovely greenish-yellow with rust-colour veins and large striations and patches of an orange hue. The present surface of the face is somewhat discoloured and has lost its sheen, as immersion - to remove the plaster restoration - has leeched out the calcium sulphate in the alabaster. The rest of the figure retains its original smoothness and lustre.

The history of this figure is worth mentioning as, since its discovery at Tell Djokha with another similar piece around 1930, a confusion as to its ownership and location has arisen, leading to erroneous information being given in scholarly publications.

Both figures of translucid greenish alabaster were a chance find and found together. This example entered a private collection and its companion piece, measuring 27.5 cm, the Iraq Museum Baghdad [3]. A temporary exhibition there at the end of the second world war was described by Seton Lloyd [4]. Notwithstanding what precedes, H. Frankfort [5] mentions the location of the present figure as Baghdad Museum and reproduces the plaster cast [6] in possession of the Museum. The mistake is taken up by J.A. Potratz [7] and, curiously, repeated with an added error in Treasures of the Iraq Museum, by Faraz Basmachi, a publication of the Ministry of Information 1975-76, where the Bull-man is reproduced pl. 67 and given inventory 51023 which belongs to its smaller brother and pendant. A. Spycket [8] mentions both figures, mistakenly ascribing them both to the Iraq Museum and reproduces the present example.

Umma was a major Sumerian city, best known today for the war [9] with its neighbour and rival Lagash, modern al Hiba.

The inscription behind the right shoulder has proved difficult to read [10], but is generally accepted as: "For Enlil. Pabilgagi, king of Umma" [11]. At this time many Sumerian rulers also assumed the role of priests.

The statuette's nudity and his representation as a bull-man identify him as a mythological figure. Seton Lloyd [12] suggests that the copper statues represent naked priests or "heroes" functioning as stands.

The vertical hole in the head of the present statue and the square hole in its smaller pair may suggest that both figures served as cult objects, possibly fulfilling the function of stands for a lamp or bowl of incense [13]. May we conjecture that they were placed in the cella of the temple in front of the divinity, maybe the king himself assuming the role of the god.

This statuette and its pendant in Baghdad of a particularly fine greenish alabaster with rust-coloured veins are the only two examples of bull-men in the round that have been found so far in Mesopotamia. Notwithstanding the difference in size between them, the workmanship of the sex, nose and mouth, the similarity of the three-tiered belt, the way the stone is carved to reveal veining across the shoulders, their polish and general appearance suggest that they are not only from the same major workshop but in all likelihood by the same hand.

The bull-man, often ithyphallic, appears on seals with heroes and in animal combat scenes.

Likewise in semi-translucent alabaster of a warm, slightly amber colour is a naked, bearded, kneeling figure with a similar girdle, four- or five-tiered, though in a different stance and not ithyphallic, found at Tell Asmar [14]. He may be a product of the same workshop, the hollowed-out cavity on top of the head probably indicating that the figure was also a support [15].

These objects probably form part of what we may call, for want of a better word, temple furnishings, and are not ex-votos, although they adopt the clasped-hands gesture of worshippers (see cat. nos. 1, 13). To the same general tradition belongs the earlier kneeling figure in limestone holding a vessel on its head from the Sara temple at Tell Agrab and dated Early Dynastic I/II, c. 2800-2600 B.C. [16]

1 A smaller representation and of a bull with decoration and various anatomical parts likewise added in different materials, still has three of its legs which are of silver: Orthmann, W.: PKG 14, no. 14b, p. 162 pl. 14b.

4Sumer II, 1946, pp. 1-2: "On the left is a coloured plaster cast of a damaged figure in veined, greenish alabaster, found at Tell Jokha (ancient Umma) in about 1930 and at present in private possession".

6 As evidenced by the photograph, in that the rust-coloured veins on the right shoulder are painted on and the two holes on the chest for inlay show plaster remains.

13 Such holes could have served for the insertion of a rod for a basket-like support which are usually found held up by human figures or protruding from the backs of animals in metal (see cat. nos. 16, 30).