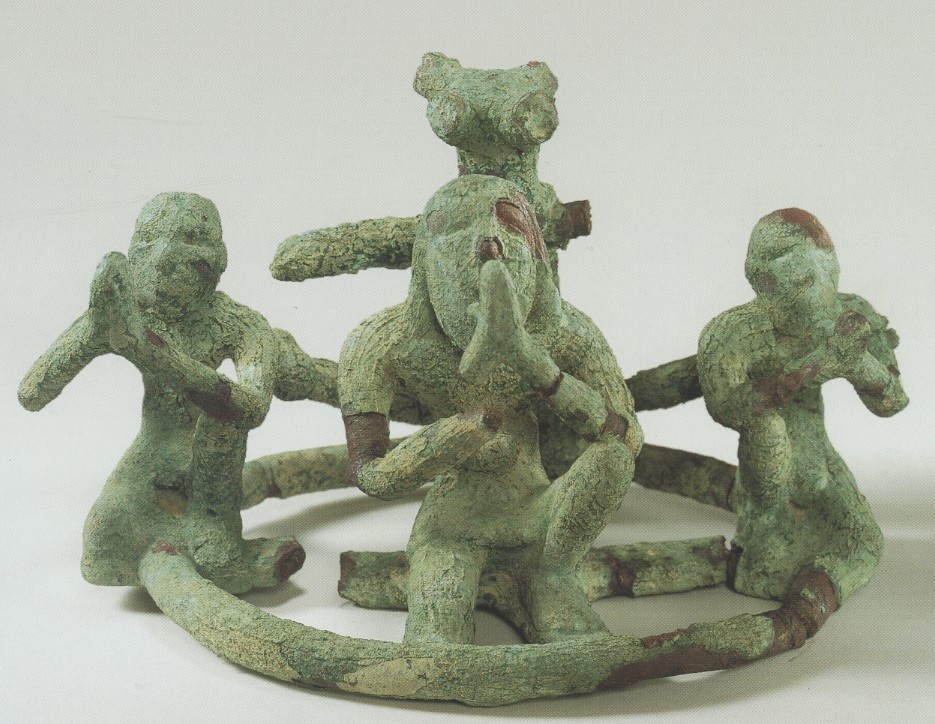 Solid-cast upside down by the lost wax process, the molten metal being poured in from the underside.

Condition: reassembled from four large pieces and five small fragments. The whole very slightly bent out of shape, particularly noticeable for the right forearm of the central figure.

Missing: two branches from the tree and the four elements that are either branches or the arms of a support of which only stumps remain at the top, and a small, flat section of one of the crossbars of the ring.

The surface is rough, in appearance granular and with longitudinal parallel ridges, a thick crust of light bluish green to dark green, flaked in places to reveal a Burgundy-coloured reddish copper.

This cult group has no direct parallel. It represents three figures at worship, a stylized tree behind them. The central figure with long hair, two braids framing the face and beard, is dressed in a skirt, his waist girt by a wide belt with a large central knob; he may be a priest. The two attendants are smaller, naked and beardless, perhaps an indication of their lower rank.

The stylized tree - maybe a "tree of life" - shows three complete branches still in place with curious double knobs on two of them, possibly phallic in connotation. The four protuberances on the top may be remains of support elements for a bowl, a lamp,
or some offering.

The whole group is mounted on a metal ring with flat crossbars.

The ensemble may have had a comparable function to that of the stand bearer (cat. no. 16) and to the goat vessel support (cat. no. 30).

For the projections at the top of the stylized tree a comparison with those surmounting the head of the nude male figure from the Temple Oval at Khafaje [1] seems appropriate. For the crossbars of the ring, there is a rapport with our stand bearer (cat. no. 16), with what was in all likelihood the base of the bull stand in Washington [2], and the rectangular grating of the ibex in Baltimore [3].

There is a bearded kneeling copper figure of somewhat earlier date, said to have been found near Warka (ancient Ur) [4]. He is seated with his legs tucked up under him and wears a broad belt. He is rounder and less oval than the central figure of our group but related to the alabaster bust of a bearded figure from Uruk of same date in Baghdad [5], as are the two limestone statuettes probably from Uruk in Paris [6]. Also related are the composite figures of chlorite and limestone [7]. All these figures share a similar style of beard with shaven upper lip and oval lower edge.

The present group has affinities with other sculptures from the end of the 4th millennium B.C. down to objects found at Shahdad, dated mid to late 3rd millennium B.C., but also illustrates a particular characteristic which is the position of the three figures seated on their haunches, one knee up and the other leg tucked under. This posture is to be found mainly on seals from Iran, dated to the first half of the 3rd millennium B.C. [8]

This ensemble is reminiscent of material from Mesopotamia (though the gesture of adoration of the three worshippers with palms flat is non-Sumerian) and Southern Iran, but belongs to Central Asia [9].

4 In the collection of Jonathan P. Rosen, New York; ascribed by E. Porada (A Male Figure in the Style of the Uruk Period, in: Mori, M. <ed.>: Near Eastern Studies Dedicated to H.I.H. Prince Takahito Mikasa on the Occasion of His Seventy-Fifth Birthday, Bulletin of the Middle Eastern Culture Center in Japan, vol. V <Wiesbaden, 1991>, p. 335 ff.) to the style of the Uruk period and probably Mesopotamian (offprint kindly relayed by Mr. Rosen).

9 Discoveries of recent years have shown that Bactria (Northern Afghanistan) was a major centre of ancient metalwork in the late 3rd and early 2nd millennia B.C. An extensive network of exchange connected this Central Asian culture with the various regions of Greater Iran as far west as Susa (this trade network is thoroughly discussed by P. Amiet, see footnote 8).