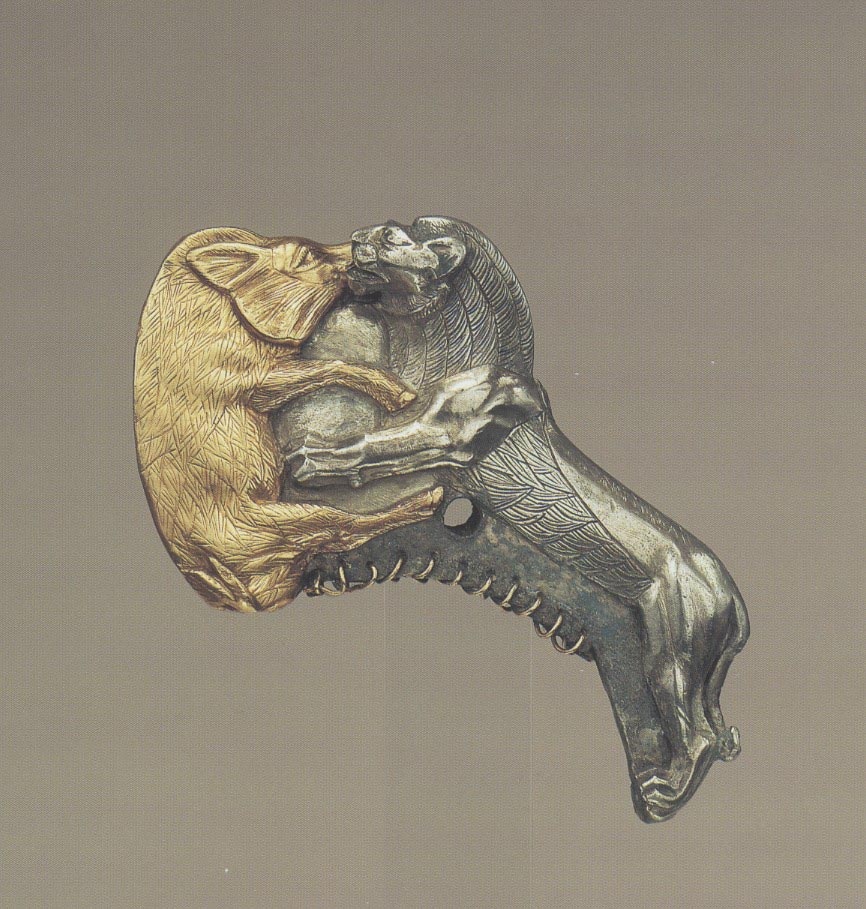 The whole cast by the lost wax process. The boar covered with a sheet of gold annealed and hammered on, some 3/10-6/10 mm in thickness, almost all the joins covered up with silver. At the base of the mane between the shoulders an oval motif with irregular indents. The lion and the boar hammered, elaborately chased and polished. A shaft opening - 22 holes around its edge laced with gold wire some 7/10-8/10 mm in diameter - centred under the lion's shoulder; between these a hole (diam: some 6.5 mm) front and back for insertion of a dowel to hold the shaft in place, both now missing.

Condition: a flattening blow to the boar's backside where the tail curled out and another to the hair between the front of his ears, his spine worn with traces of slight hatching still visible, a slight flattening and wear to his left tusk and lower left hind leg. A flattening and wear to the left side of the lion's face, ear, cheek, eye, nose and jaw and a flattening blow to the whole right forepaw and paw. Nicks to the lion's tail. The surface with traces of silver chloride under the lion's stomach and around the shaft opening.

The closest parallel stylistically is the famous silver axe in New York [1] with an almost identical shaft opening, but laced with silver wire, and hole for the dowel. The boar is less realistic, a hanging posture somewhat unnatural with a distortion to the front section of the upper part of its spine, to fit the function of the axe head and blend in with the rest. On our example the posture is naturalistic as would befit a dead boar. The eyes of both bear a similarity and their tails end in two separate tufts [2].

The New York axe is ritualistic and clearly thematic as it illustrates some myth, saga or religious belief which may explain a certain stiffness. For another wild boar, but with a tiger, his stripes inlaid in silver, and a goat, there is the bronze axe in London [3], very different for the shaft opening and mode of attachment with its multiple rivet holes and rivets. The eyes are shaped as round holes and were possibly once inlaid.

There is a fourth axe [4] with a boar in similar posture, in bronze - attacked from below by two lions, their hindquarters attached to a cylindrical shaft with a projection on its other side.

Shaft hole axes were made throughout the Near East over a long period. P. Amiet fully describes the considerable exchange of metalwork that took place towards the end of the 3rd millennium B.C. throughout vast expanses of Greater Iran. T. Potts tells us that the Sumerian examples are consistently plain whereas the more elaborate types are from the Luristan, Kerman/Lut and Bactrian regions. Luristan examples and others further east have animals in high relief along the butt, whereas Bactrian hammers and axes have an animal protome projecting from it. He further adds that there is very little evidence of exchange between Mesopotamia and the highland regions; however, if influence there was, it would have been with Susa and Luristan as they were close neighbours. However, there is "clear indication of an active and widespread exchange network stretching the entire breadth of the Iranian plateau from Bactria through south-east and south-central Iran as far as Susa" [5].

Where did our particular type of axe originate? This author feels that it was in Bactria. There is an interesting bronze hammer in Paris [6] with an inscription of Shulgi, from Susa, T. Potts [7] says it is typologically Bactrian with lock-like curls on the butt and birds' heads rising from the top, and is surely an exotic item. A very similar hammer [8] of purer stylization, finer workmanship, and in silver with the tail plumage partially gilt is also said to be from North Afghanistan.

The understanding of the nature of a wild boar would be in keeping with a Western-Central Asian provenance where the beast thrived in the lands around the Oxus. The distinctive mark of oval shape between the shoulders is neither a solar emblem nor a tuft of hair; may we suggest that it could be a clan identification [9]? The boar's juxtaposition with a lion - the latter possibly expressing the victory of the ruler over the dark forces of nature - would be well suited to ceremony and prestige.

4 Christie's, New York, 15 December, 1994, lot 68 ill. (L: 15.2 cm): its condition after extensive cleaning from what must have been a lump of chloride renders comparison of details difficult; however the shape of the eye seems to be as with the New York and present example.

8 In the author's collection and said to be from the same region as this ceremonial axe, a very strong new indication of their provenance and manufacture.

9 In China, jades from Hongshan (Shanghai region) carried clan marks from c. 3500-1800 B.C. and bronzes from Erligang (name of site and period) at Zhengzhou, Honan, from 1800 B.C. onwards. This does not necessarily suggest a connection.