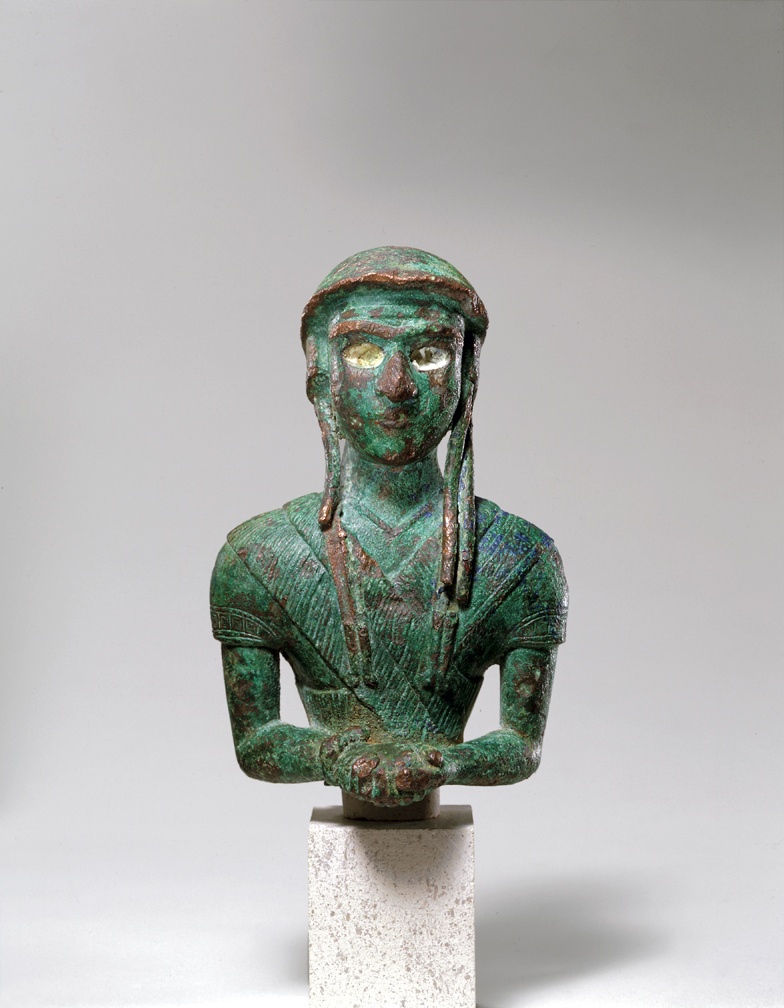 Thick-walled hollow-cast with elaborate cold-working. Details such as the double braids were cast separately and added, inserted in round holes reserved for the purpose beneath the "helmet" and annealed onto the double scarves across the chest. At the initial stage of carving the wax around the core, the arms and hands were made separately of solid wax and then either applied to the body and cast with it, or possibly cast separately and added to the statue, in the same fashion as were the braids.

Condition: missing the body from the waist [1] down; a fragment from each left braid, a large piece of the back right braid and the entire front right braid. Eyes once inlaid.

The whole bust is battered, nose and mouth abraded. The entire surface was previously covered with a hard white limestone deposit - still visible in the socket of the left eye - removed in a modern cleaning that has revealed the very fine engraving. Present patina a bright green and azurite blue over parts of the bust; copper-coloured metal shining through on the edge
of the "helmet", eyebrows, nose, braids, etc.; parts a dull-coloured metal.

Originally the statue was almost 30 cm high. Certain characteristics such as it being hollow-cast with considerable differences in thickness, varying from 3 mm at the waist to about twice that at the neck, and casting flaws around the waist indicate that we are still at the inception of this method, close to the end of the 2nd millennium B.C. in this part of the ancient world.

The unbearded, soft, juvenile face, the short-sleeved shirt - a specifically male garment - and the way the hands are joined - also a masculine manner of representation [2] - point to his being a youth, in all likelihood a prince. The two lion heads that decorate his bracelet are in style somewhat comparable to the one in gold on the handle of a whetstone from Susa [3] ; and the element around his neck is the same as on the little prince figured between his parents, the king and queen, on the rock relief of Shikaft-i Salman from Izeh/Malamir [4] .

On his head a coif with a visor; interlacing at the back indicates that it was adjustable and therefore probably of felt or possibly of leather.

An element of considerable importance are the two double braids for they, with details of costume, headgear, position of hands, find their parallels in the comparisons [5], all in low relief [6], which have enabled Prof. Amiet to both date and attribute this unique sculpture in the round to the Middle Elamite period, that is, to the late 12th century B.C., or slightly thereafter.

However, should the date of the Kul-i Farah III relief follow [7] the siege of Susa by Nebuchadnezzar and its downfall at the end of the 12th century, it would mean that an Elamite monarchy survived to the east.

This entry is based on Pierre Amiet's article. Any mistakes or differences are the responsibility of this writer.

1 Broken here probably because this is the thinnest part of the casting with flaws as still visible on the jagged inside edge of the break.

2 For women, hands are flat on top of each other.

4 Vanden Berghe, L.: IrAnt III, 1963, pl. XXII-XXIV; Prof. Amiet in both cases calls this element a necklace, though this writer wonders whether it is not simply the border of his shirt.

5 Enamel brick relief from the temple built in the 12th century
B.C. by Shutruk Nahhunte and his two sons; the usurped stele with the image of the king of Elam wearing the same costume, double braid and "helmet"; likewise the rock relief of Shikaft-i Salman from Izeh/Malamir: Amiet, P.: AMI 25, 1992, p. 82 fig. 1+2, p. 85 fig. 3.

6 With one double braid only, since shown in the profile.