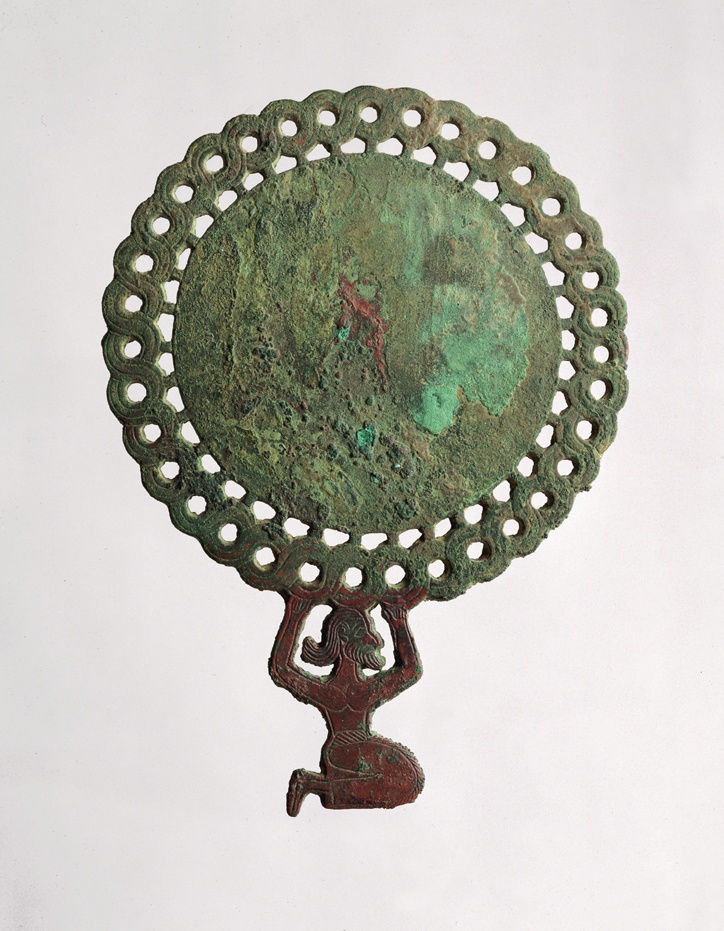 Hammered and cut from a thick cast plaque of bronze, burnished and engraved. The mirror disc itself slightly convex.

Condition: the whole surface, covered with a thick crust, granular and greenish, and with limestone deposits, is slightly cleaned - revealing a very reddish copper, especially for the figure and the odd spot, where thoroughly cleaned.

The handle [1], a kneeling figure, bare-chested, wearing skirt and boots, upholds a slightly convex disc that is surrounded by an openwork torsade symbolizing the waters that encircle the world. Thus within a cosmic context, a radiating solar disc, the viewer would have had his image thrown back to him slightly enlarged.

The parallel enabling an attribution is the Elamite relief of four figures acting as kneeling atlantes that hold up a royal image [2]. Particularly similar is the position, the floating hair, the beard and other details.

This writer sees a rapport for the hair, the incisions of various details, the kneeling position and the fringe on the garment with an earlier Middle Assyrian low relief in gypsum [3], a predecessor to our mirror and comparable with it.

The reliefs of Kul-i Farah III and VI must date, as does the present mirror, to around the end of the 2nd-early 1st millennium B.C. and suggest that relations between the Elamites and the ancestors of the Persians from the highlands lasted longer than previously thought.

This entry is based on Pierre Amiet's article. Any mistakes or differences are the responsibility of the author.

1 The use of the human figure for mirror handles probably made its first appearance in Egypt, though there as in later examples from the Middle East, such as found in Khurvin or Bactria, the figure is always feminine.