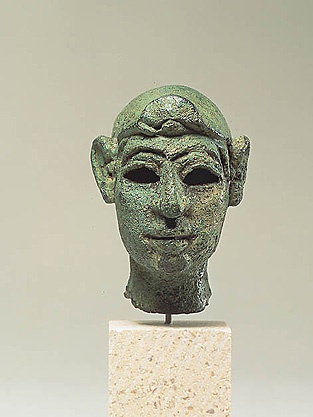 Solid-cast by the lost wax process and worked in the cold. The eyes and eyebrows once inlaid, the deep groove which runs across the top of the head and down its sides [1] served to hold in place precious metal sheets which covered it. Though unlikely, this writer wonders whether the groove might not have served for attaching the head to a sceptre by means of a leather thong, gold or silver wire [2].

Condition: probably broken off a statue; a blow or crushing has squashed back and cracked the visor of the cap; there is a flattening to the top of the back of the head, to the end of the nose and to a protuberance on the chin. Some nicks to the underside of the neck. The surface which is weathered, with most of the original skin of the bronze worn away, gives an overall appearance of roughness and pitting. The present colour varying shades of green and greyish-green with traces of beige earth and blackish limestone deposits.

Prof. Amiet notes the delicate modelling of the face and considers what this writer interprets as a sort of cap with a crushed visor following the contour of the hairdo to be the hair itself. We see as hair ending in sideburns what comes down over the temples in front of each ear. He also notes the smiling realism of the face, a carry-over from Neo-Sumerian tradition attested by small-scale sculpture from Susa of the end of the 2nd millennium B.C. He considers the pertinent comparison to be two little bronze busts that surmounted linchpins for chariot wheels. They were found at Uruk in ruins of the Parthian period, surely not their original context, and must have had, he says, an Iranian provenance.

The technique of bronze cast on iron pins is unknown before the early 1st millennium B.C. and is very indicative of a survival of Elamite tradition at a period later than the Shutruk Nahhunte Dynasty, notwithstanding differences with the linchpin bronze busts. This little head with its particularly refined smile can be compared to Neo-Elamite works [3], that are the origins of an art to be referred to preferably as Elamo-Persian rather than Proto-Achaemenid in view of the importance of the Elamite influence.

This entry is based on Pierre Amiet's article. Any mistakes or differences are the responsibility of the author, who admits that he had originally thought that this head could be Kassite, 1500-1200 B.C.

2 We consider the neck possibly too cylindrical to have surmounted a statuette and its end too flat to have been broken off one. Furthermore, might not the groove (3 mm deep and about 3 mm wide) be rather too large for insertion of the metal sheets?