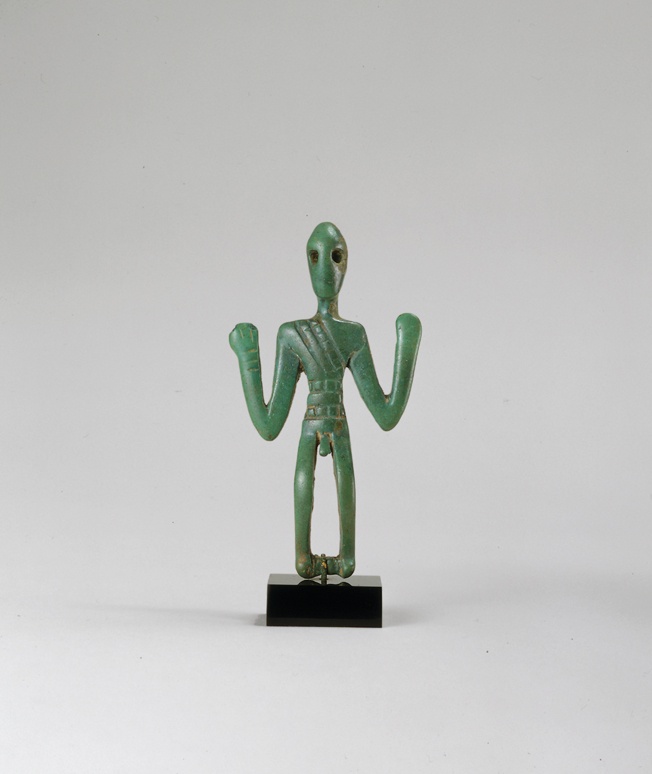 A combination of casting by the lost wax process with hammering, cutting, and other cold-working. The arms made separately [1] and affixed by fusing to the body without solder, both parts heated at the points of joining.

Condition: a loop at the back of the knobbed head broken off in antiquity, and casting faults on the back. The whole beautifully soft from an exceptional amount of wear: the knobbed head possibly once surmounted by a helmet crest, the place of attachment worn down, though a sort of round cap is perceptible; part of the back of the head so worn down that traces of the loop are hardly identifiable, the nose completely worn down and only the corners of the mouth still visible. The eyes were probably once inlaid. On the right hand, both the fingers and the bracelets around the wrist much faded, on the left these are totally worn away. Chips to the tip of the right hand and under the crossbar between the feet. The surface a shiny pale olive green.

The pendant has counterparts in a bronze statuette
[2] from excavations in the necropolis at Khurvin, some 80 km north-west of Teheran, another in Berlin [3] and conjoined statuettes in London [4]. Vanden Berghe's description of the Khurvin example as being the representation of a warrior, though it was once worn as a pendant also, applies to all four figures. The comparisons wear crests and though this figure does not, the tremendous wear is such that there may have been one broken off in antiquity, of which no definite trace remains.

Whether a warrior or not, the position of the arms may indicate a worshipper.

1 On account the casting difficulty of projecting arms evidenced by imperfections between and around the shoulder-blade region. The British Museum joined figures are crudely cast and arms cast separately. As each figure has a loop for suspension at the back of the head, and the join between them is at the shoulders only, and not also at the feet, the author hypothesizes that each was cast as an individual statuette and, either as an afterthought or as a later repair, joined, a simpler operation than making two more arms and attaching them. As far as can be gleaned from photographs, this is not the case with either the Teheran or Berlin examples.

3 Museum für Vor- und Frühgeschichte XI c 4844, allegedly from "Adjin Dodjin", though find-spot not certain. This information kindly supplied by Dr. Melitta Brönner of the Museum in a letter dated 4 November 1992; upon our insistence and after she kindly consulted with Dr. E. Strommenger, Dr. Brönner informed us verbally on 28 June 1993 that Adjin Dodjin is the modern name of a hamlet situated in the vicinity of Khurvin.