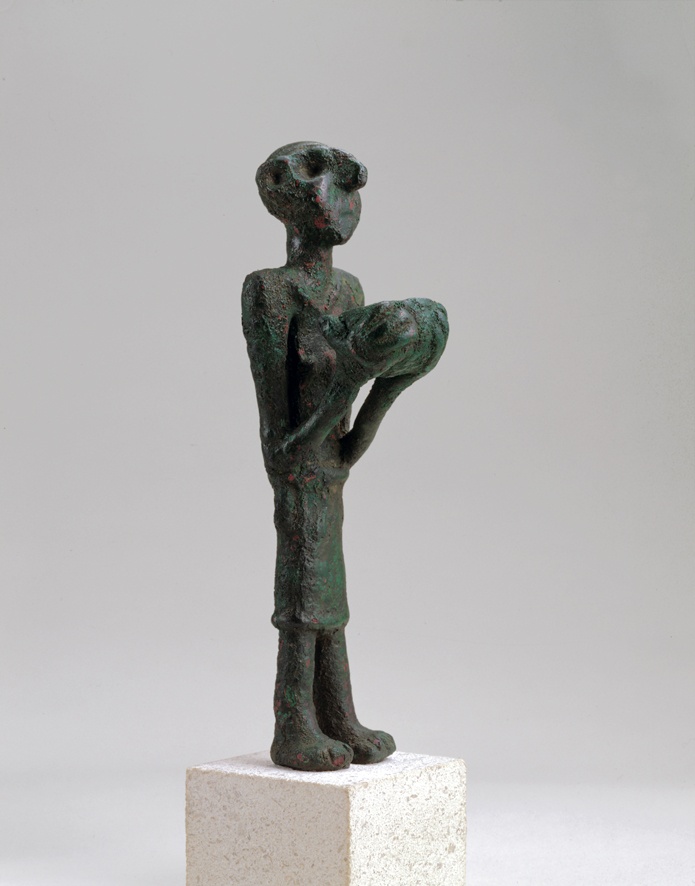 Solid-cast by the lost wax process with very little cold-working. A strip of metal joined the tangs (broken but still in place).

Condition: the surface uneven and fairly granular, partially transformed with red and dark green patches and with the metal showing through in places, as on the back of the belt. Dark earth incrustations here and there. The eyes once inlaid.

The figure is dressed in a tight-fitting garment with a well-marked neckline, the lower part of elliptical section ending in a hem around the knees, and from a belt over his hips hang two short strands on either side.

He has very long arms, the upper parts pressed to the body, bent at the elbows, the forearms raised in front of his chest hold a heavy bowl in powerful hands, a strap across the back of the right one possibly representing a handle on the bowl.

His head and face are schematic though individualized. The most notable feature perhaps is the beautiful curving outer line as it flows from the large nose into the skull and around the prominent occiput, ending at the nape as if one continuous, invisible stroke to the tip of the chin, at which point the lower face rises in a flat plane to meet the nose at right angle. Of equal significance the large round eyes and perhaps the most distinctive feature the curving ridges, created by a deep groove, that form the eyebrows, a continuation of the nose that seems to split over the forehead and continue back to contour the large ears, curving forward again to meet the jawbones. The mouth is small, marked by a little groove above the softly pointed chin; two furrows from the nostrils to the corners of the mouth.

Noteworthy are the body's flattish shape and broad shoulders, the spine marked by a slight indent from the shoulder-blades to the waist as he stands on rather coarse cylindrical legs slightly apart, the toes indicated on his stumpy feet.

This figure poses a problem. He stands somewhat humbly as he presents his offering. Notwithstanding two fairly small breasts halfway down his torso, often featured on male figures from the Levant, he is a male offerer [1]. We have found no parallel for the head and face despite its particularities. A Kourotrophos from Horoztepe [2] might be considered to bear a distant relationship because of her round eyes - though less deep and funnel-shaped - a somewhat similar outline of face with a flat plane from under the nose to the chin, though all the rest is different. The neckline of the tight-fitting garment is of similar shape to the one on the bust of a young prince (cat. no. 19), but resembles far more the same V-shaped neckline on the Mountain Culture female idol (cat. no. 24). However, this is a feature found on other statues from the Near East. Likewise the garment with its lower hemline bears a relationship to other statuettes from the Levant, especially seated figurines. There is the odd comparison for a particular feature such as the curving lines that flow up from the nose to form the eyebrows and circle the ears, visible e.g. on the face of a female in Paris [3].

We sense a distant familiarity with the odd Phoenician or Ras Shamra work, and an affinity in this figure's attitude - his head and the hands holding up the bowl - with Sumerian art. At this stage, it would be foolish to be more precise than to give him a Levant or Anatolian label.