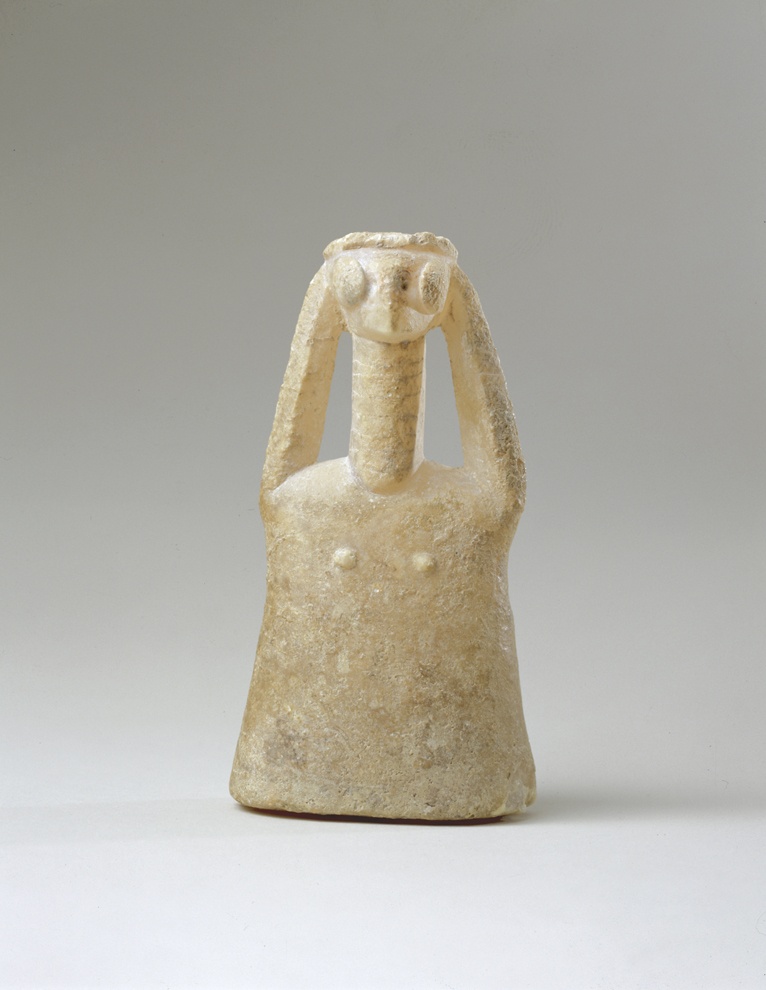 Our female figure and especially the head is stylized in keeping with pre-historic tradition which favours a non-realistic approach as the artists are not trying to represent reality.

In general, though there are exceptions, funerary art is very rare in the Near East before classical times. However, her gesture of holding her arms up to her head would have been one of mourning in the more recent 1st millennium arts of Assyria, Phoenicia and Greece. An example for this gesture is to be found in a series of mourners in low relief on the sarcophagus of Ahiram [1].

We can find no parallel for the oval cushions over her cheekbones, though they are reminiscent of sheeps' ears, and there is an animal element, in a way, in her beaked face with no indication for the mouth.

Linear incisions decorate different parts of the figure: the two outside curves leading up to her shoulders, the arms modelled in four facets, the two exterior ones each engraved with half a herring-bone pattern, the concentric lines around her neck representing necklaces, the hair on top of her head indicated by a central parting and irregular herring-bone incisions, crowned by a band of tressed hair and a long, single braid of hair engraved with lozenges falling down her back. There are infinitesimal traces of black colour in some of the incisions.

She is clad in a tunic, its low neckline - baring both breasts - indicated at the back and at the front by two engraved parallel curves, its skirt ending in a wide row of superimposed lozenges between two lines. Similar parallel lines, lozenge hatchings and herring-bone patterns are to be found on Kültepe idols, likewise
in alabaster [2].

There are no convincing parallels for this unique figure whose function was almost certainly funerary. She could have belonged to one of several cultures, hypothetically stretching both in time and space from Alaca Höyük to Kültepe or even further afield.

It should be noted that the excavations at Alaca Höyük revealed thirteen royal tombs, the wealth and artistic importance of their contents indicating an important settlement; though neither temples nor palace, if such ever existed, nor habitations were dug as they lay beneath Hittite remains [3].