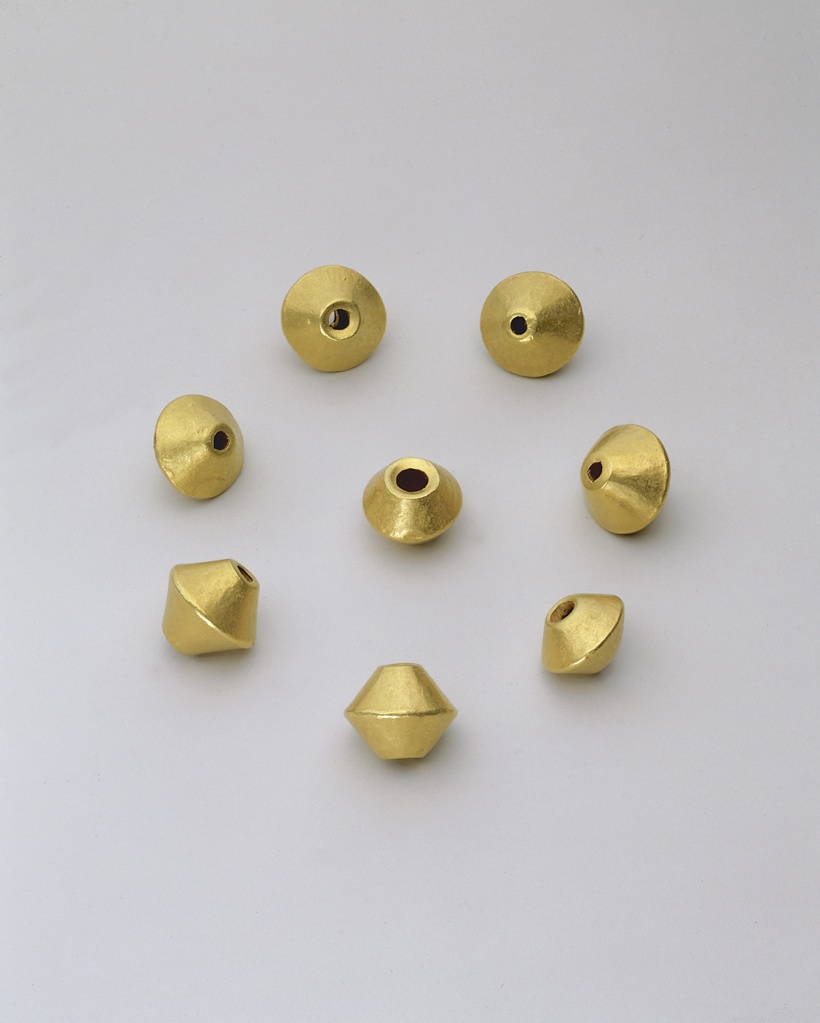 Biconical beads, spanning a period from the late 4th millennium B.C. through the 1st, of similar shape and size (2-3 cm) have been found over a vast area covering Anatolia and Greece.

These beads are the only examples of such size in solid-cast gold. All the others known are of different materials: stone, frit, terracotta (the great majority) and in one case, a set of eight in bronze [1]. All the stone and terracotta examples of similar size are thought to be spindle whorls or warp weights. Some Middle Neolithic examples from Sesklo in the Volos Museum [2], also some terracotta ones in brown ware from Alaca Höyük [3] and a vast number of terracotta examples from Troy are all described, with reservations, as spindle whorls.

There are four possible explanations for our beads:
- elements of a sceptre or staff
- beads for a necklace
- the weight for a spindle whorl
- warp weights.

We question their use for the first two because the cylindrical perforations are of different diameters and the beads do not fit well together. Moreover, they appear unsuited for a necklace, since, though of the same type, they are of different sizes and shape, as well as very heavy. (There is a necklace of biconical gold beads, but very small, 2-3 mm - from memory and seen through the case - in Athens [4], from the round graves on Levkas attributed to Troy II, and also six gold biconical necklace beads, 2.25-2.5 mm, of the same date from the second settlement in Troy [5] .)

However, it should be noted [6] that there is the exceptional find of bronze cast beads also numbering eight from the largest Bronze Age grave in Sesklo, of a date when bronze was very precious.

According to the excavation publication, a long cylindrical element of bronze was interposed between each bead, and these different elements formed a necklace whose position in the grave indicated that it was around the body's neck. The weight must have been considerable, as the beads are massive, approximately 1.6 cm in diameter and 1.2 cm in height, but they are smaller than our gold examples. Finally, the biconical bronze beads are identical in both size and shape as would befit a necklace.

If spindle whorls, why eight in number? The number eight is just as appropriate for a necklace as for a vertical loom, so the identical number in bronze and gold is probably fortuitous.

Archaeological excavations have brought to light a huge quantity of terracotta and stone examples used as warp weights for the vertical loom, which was the type in use in Greece and the Near East. If we also take into account the story of a queen weaving and directing the royal mills (attested by clay tablets found on the Assyrian site of Tell el Rimah [7]), which must have been a source of considerable revenue, it seems reasonable to suggest that our biconical beads might have served as warp weights for a queen or princess, and been in their time prestigious attributes of a royal prerogative.